Alumnus Professor Francis Allotey is working with Imperial to create a network of maths researchers in developing countries.

Professor Allotey was born in 1932 and raised in Saltpond, Ghana, before completing a degree in maths and physics at Imperial in 1960. From there he gained advanced degrees at Princeton University before returning to Ghana to become the country’s first full Professor of Mathematics at the Kwame Nkrumah University of Science and Technology. 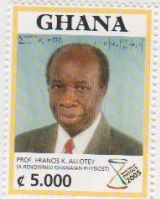 Professor Allotey is a Chartered IT Professional Fellow of British Computer Society and Honorary Fellow of the UK Institute of Physics.

He has worked tirelessly to promote maths, physics and computer sciences in Ghana and Africa more widely, and is now working with Imperial mathematicians to create a network of maths researchers in developing countries. To recognize his achievement to the promotion of science development, the government of Ghana issued a postage stamp with his portrait.

Hayley Dunning spoke to him on a recent visit to Imperial about how he caught the science bug and what inspired him to pass it on.

Why did you decide to study maths and physics?

My father had a store selling things, including books. Among the books were maths books and books about scientists. As a small boy going to school, after the class was over, I had to come to help my father to repack the books.

As I was repacking them I was reading through some of them and my attention was drawn to those about science and the big names in science who were explaining the universe; Einstein, Hubble, Eddington. There was this incredible small pamphlet written by the BBC after the war about the ideas of science. I read it and thought I have to be a scientist so that I can also explain the workings of the universe.

Through that I had a plan to study mathematics and physics – and I was also good in these in school, so these two things worked together.

Why are you passionate about promoting the study of maths and physics?

I was influenced by Professor Abdus Salam at Imperial, who taught me mathematics and physics. After I went to Princeton, he wrote to me that he had just established the International Centre for Theoretical Physics (ICTP) in Trieste, Italy, so I should go and see how it is. The aim of the Centre was to help develop mathematics in developing countries, because Salam himself was from Pakistan. 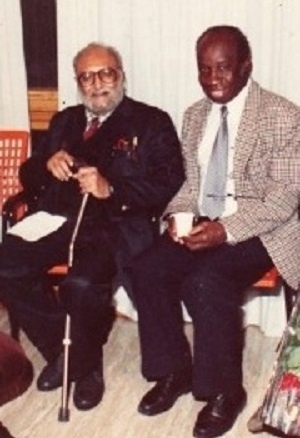 Salam also saw that I had this aptitude for leadership, so he also gave me the opportunity to organise activities not only in Ghana but across Africa. That made my interests go further. I was appointed to lead the Africa work on the Scientific Council of the ICTP – I have served on the Council now for 20 years, which is a record!

For instance, when I returned from Princeton in 1966, I noticed there was no school in Africa that taught computer science. What happened was IBM would sell you a computer, and give you two weeks of lessons, but I thought that is not good enough – let them take it as a proper university course. So on my own, against my colleagues, I created the first department of computer science in Africa. I went to many parts of Africa preaching about not only physics but also the importance to computer science.

You have a lot of achievements in science and education – are there any you are particularly proud of?

One is helping to develop mathematical sciences and physics in Africa because I have made some impact in this area, as well as my achievements in mathematical physics.

But it is very difficult to do both, so eventually my research suffered a little bit because you have to choose between the two. My work in x-ray spectroscopy [which led to the Allotey Formalism] was done in the 1950s at Imperial, but when I moved to the ICTP in 1967 I shifted more towards the development of education. 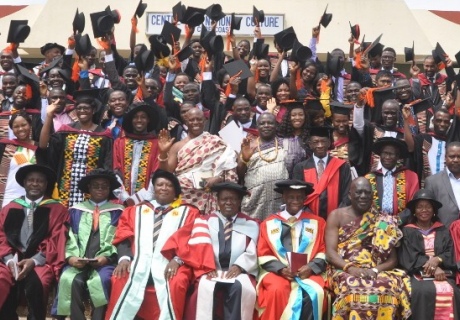 Every year for the past 25 years or so I have been organising maths and physics activities in Ghana where people from all Africa can come.

I feel happy about my development of science, particularly mathematics and physics, in Africa. It is my great achievement because from there I have former students who are working on things like quantum computing all over the world.

When I was here, every Tuesday there was lunch music concert, and this was something that gave me an appreciation of classical music. So when I saw you still have lunchtime concerts [now on Thursdays] I thought this was very good.

I’m lucky that I had my father’s bookstore and I was able to read biographical books of scientists. Then I had good mentors who made me a better student.

There are more students now, and the buildings have changed. When I was here we didn’t have a library, we had to go to a room and say which book we wanted and sign it out from a professor. Now there is a great big library for maths and science. The eating places have also improved a lot!

There were a few professors I became close with. I was interested in cosmology, and my first idea was to try to do that, but cosmology at that time was not well established – it didn’t have good experimental backing.

So my professor suggested that if I was going to go to Africa I should change to work that has a better programme; that of condensed matter physics. He said if I did that I would become a good physicist. It was good that I took his advice.

I am lucky. I’m lucky that I had my father’s bookstore and I was able to read biographical books of scientists. Then I had good mentors who made me a better student. They became my friends – they were very welcoming, even one professor inviting me and my wife to his house in Surrey. I don’t know why – maybe it was the first time they had seen an African try to do mathematics!