Last Saturday, science, technology and sport came together in a unique Imperial Fringe event for the people of White City. Local families participated in a range of sporty science challenges, from flying drones to pedalling on water-purifying bicycles.

Imperial is already very active in the area. It has made a long-term commitment to White City and the local community as part of the development of its new White City Campus, which will provide a new home for research and learning.

The College is partnering with local people to offer new ways for everyone to engage in the wonder of discovery and invention, alongside new opportunities for collaboration with other leading institutions and businesses of all sizes.

These were some of the day’s highlights. 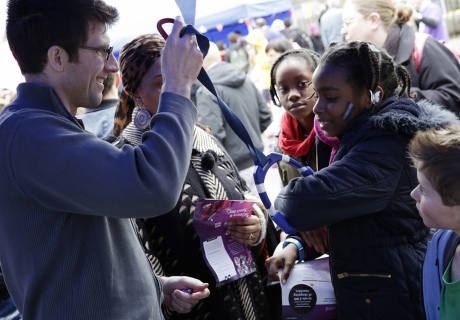 Regular sporting equipment is not ideal for most Paralympic athletes, which puts them at a serious disadvantage in competitions, despite their best effort and training. This is where Imperial’s Department of Bioengineering comes in. Through their Sports Innovation Challenge, students have designed bespoke objects for some of Team GB’s top Paralympic athletes.

Dr Jenna Stevens-Smith, from the Faculty of Engineering, demonstrated how a custom bicycle for the cyclist Jon-Allan Butterworth will allow him to shave some crucial seconds off his starting time by providing a stable support for his amputated left arm.

Dr Ian Radcliffe, Project Manager for the Sports Innovation Challenge, showed visitors how a pair of specially adapted stirrups allow swimmer Andrew Mullen, who has no hands, to hold on to the pool edge before a race.

Do you have the lungs of a footballer? 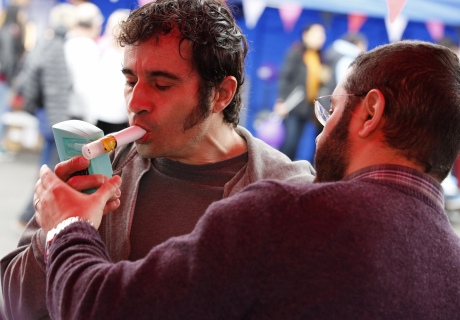 Fringe-goers had the chance to participate in an informal medical check-up by the Imperial School of Public Health respiratory doctors. Proper respiratory function is essential for good athletic performance, but manageable breathing difficulties shouldn’t put you off sport, said Dr Matt Pavitt from the National Heart and Lung Institute.

“Some children have told us that they are a bit embarrassed to have asthma. We show them these pictures of high-profile athletes who all have some form of asthma,” he said, gesturing towards a photo line-up which included David Beckham.

The medical team performed on-the-spot tests using a spirometer, which measures lung capacity, and a carbon monoxide monitor, which can detect potentially dangerous concentrations of this gas in your lungs. High carbon monoxide levels are usually a result of air pollution or a smoking habit. 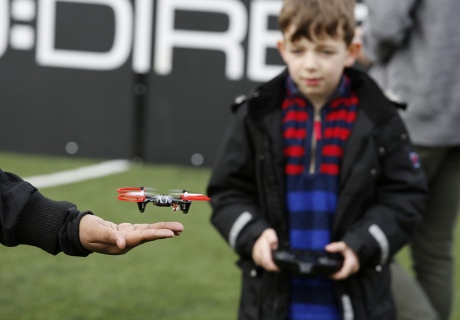 The wind didn’t put children or adults off when given the chance to fly drones inside the specially prepared netted area. Members of Imperial’s recently-founded Drone Society brought along a large selection of ‘quadcopters’ – flying drones with four sets of rotating blades – and taught participants the basics of unmanned vehicle aviation. Recreationally, drones are used mainly for aerial photography, but drone racing is a competitive sport that is becoming increasingly popular.

How do we stop athletes cramping up? 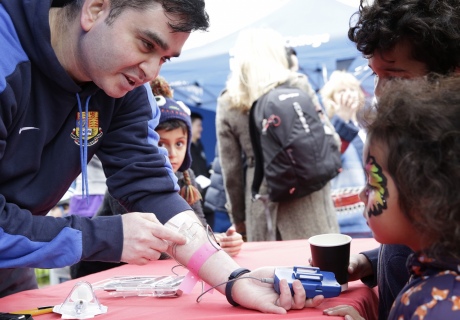 Professor Tony Cass and Dr Sanjiv Sharma, from Imperial’s Department of Chemistry, showed Fringe-goers how a patch of harmless microneedles on Dr Sharma’s arm produced live readings of his blood sugar (glucose) levels. Molecular recognition elements on the needles react with the glucose lying just beneath the outer layer of skin, in the ‘interstitial fluid’. This produces an electric current used by the monitor to calculate the concentration of glucose in the blood.

How does this help athletes? The chemists have experimented using different molecular recognition elements on the patch to detect concentrations of other molecules besides glucose. In this way, the monitor can provide readings of lactic acid, a chemical that produces cramps in the muscles. Dr Sharma said: “With the microneedle patch, we have made a cheap diagnostic tool that will help athletes take better decisions.” 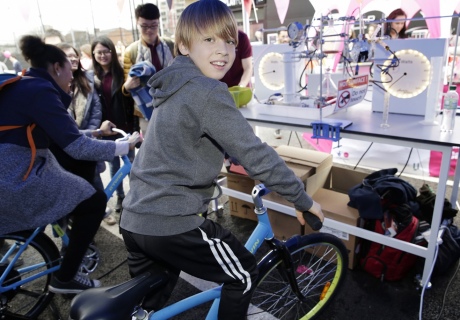 Visitors were keen to jump on the water-purifying bicycles at the Barrer Centre’s stand, from the Department of Chemical Engineering. Each of the two static bikes was hooked up to a generator powering a water purifying system for everyone to see.

A watt-meter provided readings of the electric power generated by pedalling. However, one bicycle used energy to heat up water to boiling point, while the other supplied a pressure pump that forced water through a very fine mesh known as a polyamide membrane. As frantic cyclists discovered, membrane filtering is far more efficient than boiling!

The Invention Rooms in W12 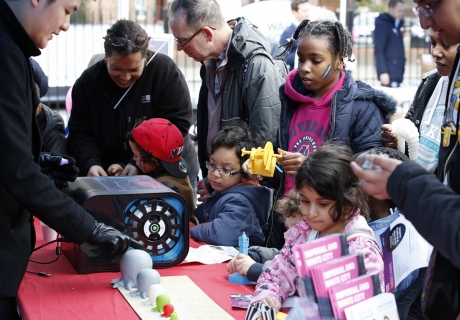 To wrap up the event, the Community Engagement Team, which is led by Priya Pallan and Tom Pearson, provided a taster of the activities that will be available to families in The Invention Rooms, an innovative new community workshop, which will open to local people later this year.

Visitors used LEDs to create their own “I’m a maker” badge. They also had the chance to experience 3D printing through a range of printed objects and a real-time demonstration of the printing process. One young visitor was particularly enthusiastic: “I wish I could print all my toys!” Imperial sports technology to be used at the Paralympic Games in Rio In pictures: Imperial Fringe invests in the public with all things money Round and round the world we go