Imperial branches out to develop synthetic biology in East Africa Synthetic biology experts from Imperial College London headed to East Africa to help identify where the field could have a life-changing impact.

The field, which draws together elements of biology and engineering, harnesses living cells and their processes to create new tools for all aspects of life, from rapid medical sensors to generating biofuels and feeding the growing global population.

Representatives from Kenya, Tanzania, Uganda and Ethiopia met with UK researchers at a three-day workshop, which took place in Nairobi last month.

Organised through the Kenyan National Commission for Science, Technology and Innovation (NACOSTI) and Imperial, the aim was to identify areas where emerging technologies could have an impact in everything from food security to industry, health and the environment.

Although developing nations in East Africa are already harnessing biotechnology in industry, such as genetically engineering crops, the workshop provided an opportunity to explore new areas which might gain from synthetic biology.

The organisers, led by Professor Paul Freemont, co-founder and co-director of The Centre for Synthetic Biology and Innovation at Imperial, have helped to forge new working relationships, develop training and nurture collaborative partnerships.

“We have identified a number of issues and there is a developed biotechnology base within the region, but it is not modern biotechnology,” explained Professor Freemont. “There is an opportunity to use practical synthetic biology techniques to develop a much more modern and focused industry.”

Currently, much of the biotech activity in the region is focused on agritech, food security and human nutrition, explained Professor Freemont. However, there are a number of issues around genetically modified (GM) crops produced there, with much of the exports destined for the European Union, where GM crops are prohibited. 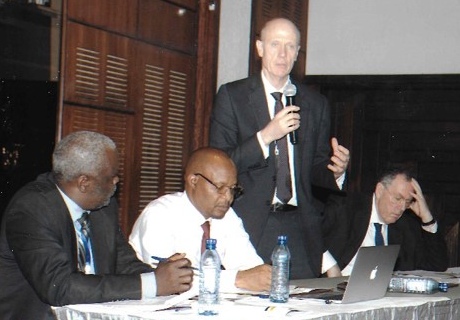 “East Africa has an opportunity to move towards a far bigger bioeconomy, where it can put in place processes such as industrial biotechnology and not just focus on agriculture,” explained Professor Freemont. “I think this workshop has allowed them to identify and audit their current capabilities in the region. They can use this meeting to identify gaps and then try and develop the technologies, training and infrastructure.”

One of the most promising emerging areas is rapid, low-cost diagnostics tools for healthcare and the environment – such as monitoring land and water for pollutants.

“There are massive needs for inexpensive, quick-sensing devices and delegates were very excited by the opportunities that synthetic biology could offer for biological based sensors which could be tested and used in the field,” said Professor Freemont.

A key area is using synthetic biology to develop simple and cheap sensing devices for medicine. These biosensors, which could be based on RNA or antibodies to detect biomarkers for infection or disease, could be paper-based or link to a mobile phone. Such devices could enable rapid diagnosis in even the most remote regions, making a real impact on communities and public health.

Like diagnostics for medicine, the detection of environmental toxins could also have a far-reaching impact. Across East Africa, soil and water contamination with heavy metals such as arsenic, mercury and lead remains an issue. Biosensor technology could provide quick and reliable tests to check for the presence of such toxic elements which may have leached into the environment or water supply.

Kenya has a massive amount of biodiversity. Bioprospecting would not only be useful for biotechnology, but also for maintaining this diversity of species

Other potential areas identified include waste management. The majority of waste in Kenya is destined for landfill, but some of the organic matter – such as spoiled food waste – could potentially be reclaimed to drive biotech processes, like using bacteria in fermentation systems to make products or biomass for agriculture applications.

Along with these more traditional areas, the approaches used in synthetic biology could be applied to harness and even protect the rich biodiversity in the region. By searching for organisms in an environment for any properties useful for biotechnology, a process known as bioprospecting, countries in the region could commercialise the natural resources, with the added value helping to protect plants and animals under threat.

“Kenya has a massive amount of biodiversity. Bioprospecting would not only be useful for biotechnology, but also for maintaining this diversity of species,” explained Professor Freemont.

“They are quite keen to combine maintaining and retaining their biodiversity with sustainable processes that harness it and use it in a laboratory or in industry.” 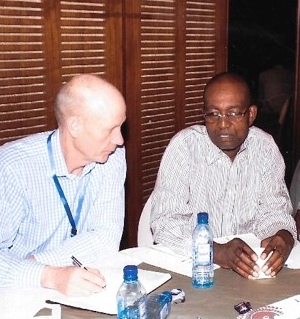 The researchers are currently producing a report on the outcomes of the workshop which will help to develop a plans for funding and highlight areas and industries which can be targeted. While challenges include building up the technology and training around the area, as well as the infrastructure, the hope is that this workshop and others like it will lead to new partnerships in the region and strengthen ties between researchers in East African nations and the UK.

“This meeting has put synthetic biology and modern biotech at the top of the agenda,” added Professor Freemont. “I think there is a real potential so it will be interesting to see how things develop.”

The workshop was funded by the Biotechnology and Biological Sciences Research Council (BBSRC) and the UK government’s Global Challenges Research Fund (GCRF).