Congratulations to Radu Baltean-Lugojan for being awarded the IBM PhD Fellowship for 2017/18.

The Fellowship is incredibly competetive worldwide and honours exceptional PhD students whose interests coincide with IBM's (above image via wiki commons). 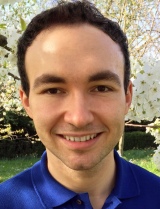 Whilst the award does highlight the quality of teaching and research in the Department of Computing, the recognition must go to Radu Baltean-Lugojan (pictured left) for his hard work and research.

Radu was nomintated for the award by Dr Ruth Misener, Senior Lecturer in the Computatonal Optimisation Group, and will be supervised by Pierre Bonami, Software Scientist - CPLEX Optimizer, at IBM.

Combinatorial NLP problems can interplay non-linearity with integrality constraints, presenting additional difficulty but also significant structure. For instance, the pooling problem, which represents blending on a feed-forward network with intermediate storage, bundles bilinear non-convexities with topological and polyhedral structure that we aim to exploit via a parametric approach.

More generally, we aim to efficiently use such structures in parallel Branch & Cut algorithm implementations.