IMSE's final seminar of the academic year perfectly highlighted the benefits of the holistic molecular science and engineering approach.

During a Lunchtime Seminar last week, hosted by the Institute of Molecular Science and Engineering (IMSE) and attended by about 40 Imperial academics, Dr Sandrine Heutz (Department of Materials) and IMSE Co-Director Professor Nic Harrison (Department of Chemistry) described the fruits of their collaborative work towards the development of room-temperature magnetic organic materials. 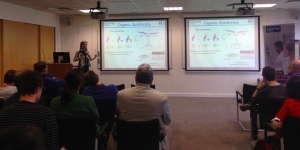 The potential of ‘spintronics’

Spintronic – spin transport electronic – materials are fundamentally different from traditional electronics because a further degree of freedom is exploited within them. In addition to their charge state, the spins of the electrons (which give rise to magnetism) are harnessed in spintronic materials.

This topic fits beautifully with what IMSE works on: molecular design and molecular assembly, through to the end use of new molecules.

Storing information in the spin state may lead to the realisation of very-fast, high-density, low-power transistors that are compatible with flexible materials. Manipulating spin states in this way also makes spintronic materials of particular interest for quantum computers.

Despite the great potential of spintronics, however, attaining the necessary magnetism at room temperature is extremely challenging.

Dr Heutz and Professor Harrison’s work in this area is focused on a well-known class of molecules known as phthalocyanines. These compounds – which were discovered serendipitously more than 100 years ago – can include a wide range of transition metal elements in their structure, giving rise to their intense colouring and their widespread use as pigments. 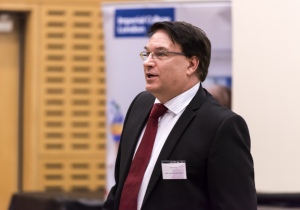 By carefully controlling the growth conditions of phthalocyanines, the molecules can be used to form thin films or nanowires with a variety of structural, morphological and spectroscopic properties.

In recent years, Dr Heutz and her research group have been able to create thin films and powders of a specific molecular semiconductor – cobalt phthalocyanine – which exhibits strong magnetic alignment at temperatures close to 100 K (-173ºC). These interactions are up to two orders of magnitude greater than in other previously produced phthalocyanines, and they can be achieved under conditions that are compatible with routine fabrication techniques for organic electronic devices. 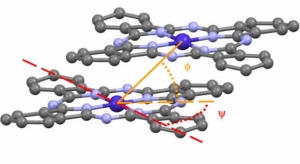 By combining Professor Harrison’s theoretical modeling expertise (using the CRYSTAL software) with these experimental results, the team can obtain a much greater understanding of the material’s properties. In a synergistic manner, the experimental data are used to inform the quantum mechanical calculations and, in turn, the models can highlight potentially useful new strategies for crystal engineering and molecular optimisation.

In particular, the team have found that changing the stacking angle between layers of cobalt phthalocyanines within molecular columns has a dramatic effect on the magnetic properties of the material, which leads to its magnetic characteristics above the temperature of liquid nitrogen.

As part of IMSE’s aim to advance integrated transdisciplinary research, this year the Institute supported (with funds received from EPSRC) seven seed-funded projects that were designed to foster new Imperial collaborations at the molecular science/engineering interface.

The IMSE funding allowed us to explore new experimental strategies – to find out what works well and what doesn’t.

As part of her ongoing work on the topic of spintronics, Dr Heutz – together with Professor Martin Heeney (Department of Chemistry) – was funded to conduct one of the four-month IMSE pilot projects.

The aim of this project – entitled Elaborating molecular design rules for organic spintronics – was to experimentally validate two approaches (co-facial stacking and alternating transition metals) for improving the magnetic behaviour of molecular materials.

The team determined the necessary structural components for the success of these methods, and now need to assemble the newly designed molecules. As a direct continuation of this work, novel molecular architectures and thin film structures will be investigated as part of a PhD project starting this autumn.

IMSE are proud to be supporting an upcoming Leverhulme Lecture Series, which will run from 15th June to 13th July and is open to all. Professor Rod Priestly (Princeton University) will deliver six lectures on the themes of polymer colloids, polymer thin films and polymer characterisation.

Sign up to become an IMSE affiliate (open to any Imperial staff whose work and interests align with the mission of the Institute) if you would like to play a key role in developing the IMSE agenda, and have the opportunity to participate in the Institute’s events and collaborations.