Imperial's Australian collaborations and global lead in carbon capture research were the focus of a visit from Deputy Prime Minister Barnaby Joyce.

Mr Joyce, who also serves as Australia’s Minister for Agriculture and Water Resources, was introduced to Imperial's research and innovation achievements, before touring the Carbon Capture Pilot Plant at Imperial’s South Kensington Campus. He met experts including Dr Daryl Williams and Dr Bradley Ladewig – both Australians – and Dr Colin Hale.

As Australia commits to reducing its carbon emissions, Mr Joyce saw how carbon capture and storage can be part of the solution. He said: “A big reason we’re here is because you’re preeminent in this space.” 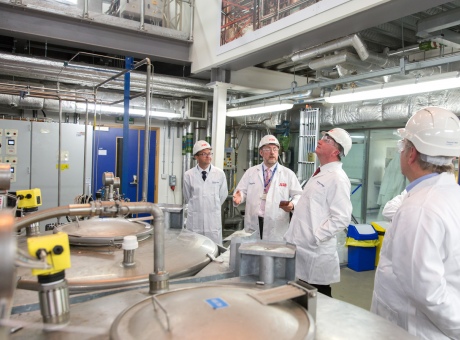 The DPM was introduced to a group of students who work on the Carbon Capture Pilot Plant. These include exchange student Vanessa Gunner, who is working on a Masters between Imperial and the University of Melbourne, Australia-born undergraduate Elysia Lucas, and postdoctoral research associate Dr Lachlan Mason from Melbourne. 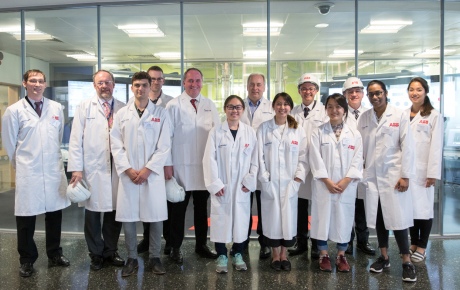 Dr Hale, Dr Williams, Dr Ladewig and their student team explained to the DPM how carbon capture and storage is an important technologically ready tool for de-carbonising current and future power and industrial sectors.

Dr Daryl Williams, Reader in Particle Science, said: “In the drive towards a low carbon economy, carbon capture from the flue gases emitted by coal fired power stations is a serious current option for reducing their CO2 emissions. The amine solvent capture technology for achieving this is demonstrated by Imperial’s Carbon Capture Pilot Plant, and highlights future global opportunities for UK, Australian and international researchers striving to make coal cleaner.” 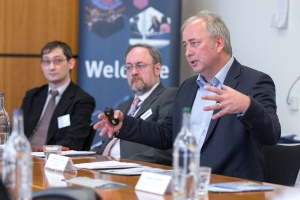 Dr Bradley Ladewig, Senior Lecturer in Chemical Engineering, said: “Australia faces unique challenges in the transition to a clean energy future. Mr Joyce pointed out concerns around stability and reliability of supply, as well as emissions intensity, and was keenly interested to hear about the opportunities provided by carbon capture and storage.

“I was thrilled to see the high-level interest of the Australian government in the world-leading research we are conducting here at Imperial.”

After his briefing from Dr Hale, Dr Williams and Dr Ladewig on the Carbon Capture Pilot Plant, the DPM said “You’ve taught me so much now, I think I can go home and build one.”

Imperial’s Carbon Capture Pilot Plant, the most sophisticated of its kind in an academic institution in the world, provides a unique hands-on education experience in a controlled and safe environment for the College’s undergraduate engineers. The plant demonstrates how CO2 emissions can be captured by a power plant. Through this, students learn the principles that can be applied in a range of industrial settings including petrochemical plants. The plant is controlled by the latest communication, computing and sensing technology.