Bacterial survival after being injected with toxins

Researchers have been able to switch on and study the mechanism some bacteria use to inject toxins into their rivals.

Bacteria often compete for resources like food and space, and sometimes this competition gets fierce. For example some bacteria can inject toxins into rival bacteria and kill them.

Bacterial competition is active warfare, which is going on all the time in our bodies, such as in our guts and lungs. If we could increase the action of ‘good’ bacteria, we might be able to fight off more of the ‘bad’ bacteria that cause infections.

Now the research team of Professor Alain Filloux from the Department of Life Sciences at Imperial College London have uncovered two regulators that control these injection systems in Pseudomonas aeruginosa. Their research is published in Proceedings of the National Academy of Sciences.

The bacteria, which can cause pneumonia, sepsis and chronic infections in cystic fibrosis patients, arenaturally resistant to multiple antibiotics. One way to tackle P. aeruginosa could be to interfere with its weapons and make it more susceptible to attack by the immune system or by other bacteria.

P. aeruginosa is an ‘opportunistic’ pathogen, meaning it is found widely but only causes disease when the conditions are right – such as when a person has their immunity compromised. If researchers know what turns bacterial attack systems on, they could find ways to supress their weapons or use them to our advantage.

Lead author of the study Dr Luke Allsopp, from the Department of Life Sciences at Imperial, said: “Bacterial competition is active warfare, which is going on all the time in our bodies, such as in our guts and lungs. If we could increase the action of ‘good’ bacteria, we might be able to fight off more of the ‘bad’ bacteria that cause infections.

“Alternatively, in the future we might be able to treat infected wounds by adding certain bacteria which excel at killing pathogens but can be easily killed with antibiotics. We could use these to target and destroy bacteria that don’t respond to antibiotics, like P. aeruginosa. Finally, we could wipe out the bacteria we introduced with simple antibiotics. It’s a novel concept for overcoming antibiotic resistance by using bacteria to do our dirty work.” 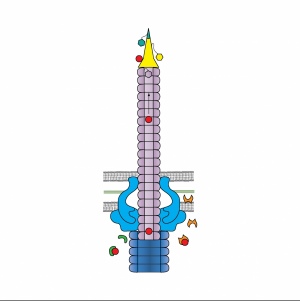 A model of the T6SS

In order to fire toxins, P. aeruginosa has to make them inside the cell, then get them past the cell wall. To do this it uses protein secretion systems. The focus of this study was on the ‘type VI secretion system’ (T6SS), which is like a crossbow that fires the toxins out of the cell and into the target cell, much like a poison arrow.

The researchers could also tell when the T6SS crossbow had been ‘fired’, by detecting proteins outside the bacterial cells.

P. aeruginosa has three types of T6SS, which the researchers believe may be used in different environments where the bacteria can live, for example in water, in soil and inside the human body. Since both regulators can control the activity of all three T6SSs, there could be a situation where all three systems are turned on at once, such as when they are under extreme attack, according to the authors.

For example, previous research showed that when P. aeruginosa detect lysis – the splitting of cells – this makes the activity of one of the T6SSs increase. This work suggests that upon detecting lysis the activity of all three systems increases.

Dr Allsopp said: “A lot of cell lysis can mean all their friends are dead, so the bacteria ramp up their attack and fight more, possibly turning all the systems on at once.”