An Imperial researcher has developed what is thought to be the world's first 3D-printed compostable and recyclable surfboard.

Dr Nathaniel Petre, from the Dyson School of Design Engineering at Imperial College London, has 3D printed a surfboard that is comparably cheaper to make, more durable and more sustainable than most conventional surfboards.

With seed funding from NASA, Dr Petre and his colleagues in the USA developed a surfboard from a material derived from an invasive diatomic algae along with a nontoxic resin made of lactic acid derived from plant sugars. 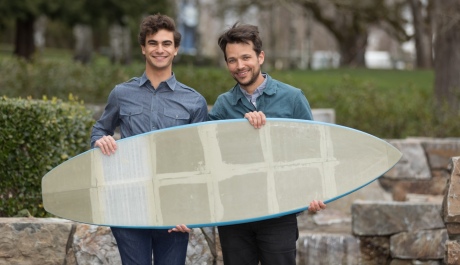 The material, manufactured by a company called Algix, can be used with Fused Filament Fabrication (FFF) type 3D printers to make objects like a surfboard.

Dr Petre also experimented with recycled plastic bottles and turned them into a printable material that could be used to make other portions of the surfboard. The aim was to demonstrate how easy it is to make products using 3D printing techniques out of just about any waste material.

Dr Petre said: “It is really satisfying to think that we can take an invasive lake algae, which is literally sucking the air and life out of lakes in the USA and use it as a sustainable material for surfboard manufacture. What is evident from this pilot project is that not only is there a potential future in for printed boards, but that there's an opportunity to print more things from waste or compostable material provided you have a big enough printer.”

Dolphin board of awesome

Using 3D printing to make surfboards, says Dr Petre, opens up new possibilities to make more complex surfboard designs that mimic qualities of aquatic creatures. For instance, the physical factors that give dolphins the ability to glide and surf waves could be incorporated into designs to optimise how a surfer controls their board in different conditions.

3D printing, also known as additive manufacturing, refers to processes used to create a three-dimensional object, where layers of material are formed under computer control to create an object.

This manufacturing method is already having an impact in many sectors such as the aviation industry where 3D printed components are being used to make planes lighter and more fuel efficient. In healthcare, researchers are developing 3D printed implantable replacements such as teeth and bones, which mimic the qualities of real bone.

For the current prototype, sections of the board were printed and then later assembled. However, Dr Petre recently won a grant from the Imperial College Hackspace as part of their Enterprise Boost funding initiative which will enable him to develop a 3D printer that can manufacture bigger items.

Ultimately, this will enable Dr Petre and the team to print a surfboard in one go, which has advantages in terms speed and ease of construction.

As part of his ongoing outreach activities, Dr Petre has also partnered with one of Europe's largest surf retailers – Surfdome. They aim to make a 3D printed surfboard from recycled beach waste, which will go on permanent display at the Eden project in Cornwall as part of their Eden Blue exhibit.

Shortboards are highly maneuverable and suitable for fast, steep waves.

Fish boards are usually shorter, wider and flatter than shortboards.

Funboards is a general term for all surfboards that will let you catch more waves because of the extra volume. They are perfect for beginners because they are wide and stable.

Longboards are eight to 11 feet long and are easy to paddle and catch waves on.

This is a mix of the design features from two similar board types.

The newest addition to the line-up is the stand up paddle board. It is designed to stand up while paddling. 3D printing: Imperial academic talks about advances being made in the field

&quot;I&quot; newspaper: &quot;Surfer prints out a board made from discarded plastic bottles he found on the beach&quot;