Imperial is committed to finding replacements for animal research, to reducing the number of animals used in experiments and to refining the methods to minimise suffering.

This set of principles is often referred to as the 3Rs and this year’s annual report focused on the achievements of academics and technicians in this area.

Around 100 people attended the event in the Sir Alexander Fleming Building to hear a series of presentations from researchers, staff from Central Biomedical Services (CBS) and communications.

“This report showcases some of the innovative applications of the 3Rs from around the College, and also describes what we refer to as the fourth R - relevance - aimed at ensuring the work we do with animals directly relates to human disease and will ultimately have a positive impact on human health and well-being.”

Excellence in animal research: The 2017 winners

Professor Stirling made five awards for excellence in animal research and commended everyone working the field for the fantastic progress that had been made.

The team award, which was introduced this year for the first time, was given to Professor Wendy Barclay, Ms Rebecca Frise and Ms Tess Boreham for their refinement of ferret models for research into the transmission and mutation of influenza.

Ms Frise said: “It’s great to be recognised for the work that not only myself but my colleagues have done.”

Ms Boreham, technician and Named Animal Care and Welfare Officer at St Mary’s Hospital, said: “As a technician you are always looking at how things can be improved from an animal welfare point of view. The researchers that I work with here at St Mary’s are keen to refine their techniques as much as possible and CBS are always keen to help.”

Professor Barclay, who gave a presentation on the team’s work at the research forum event, added: “The great thing is that by thinking about how to minimize the use of animals, we were prompted to think more deeply about what is going on in our experiments and how we can measure that in a different way.”

Mr Phil Rawson, Senior Technician and Named Animal Care and Welfare Officer, received the Provost’s Award for leading an initiative to house post-operative guinea pigs in groups, rather than in single cages. This refinement work has led to reduced stress levels among the animals. Mr Rawson said: ‘We have always looked for ways and means to improve how we look after the animals in our care. I see it as recognition for the hard work the CBS team put in every day.”

Dr Marie-Sophie Nguyen-Tu, Postdoctoral Research Fellow, Department of Medicine, received the Provost’s Award for leading the establishment of a new technique for researching pancreatic islets, the cell clusters that produce insulin. Her work could greatly reduce the number of animals used in diabetes experiments, as the islets can be observed through the lifespan of the mouse. She has also led refinement initiatives, working with mechanical engineers to reduce the risk of eye damage and with an ophthalmologist to improve perioperative care.

Dr Nguyen-Tu said: “This prize is a recognition of the effort made by our group and Imperial College to apply the 3R rules and always work on more ethical procedures for animal welfare.”

Dr Charlotte Dean, Lecturer in Lung Development and Disease, National Heart & Lung Institute, received the Provost’s Award for her work to introduce precision-cut lung slices (PCLS), a new technique, to her laboratory. PCLS represents an opportunity to reduce the use of mouse tissue, replacing it with specially prepared human tissue collected post-mortem. She plans to use her £1,000 prize to fund a workshop on the applications of lung tissue slices.

The College is also a signatory to the Concordat on Openness on Animal Research a and this year’s communications award went to Ms Jemma Strachan, Ms Laura Gallagher, Mr Ryan O’Hare, Ms Madina Wane and Mr Ray Edgar for designing, arranging and recording a Google Expeditions virtual tour of Imperial’s animal facilities. 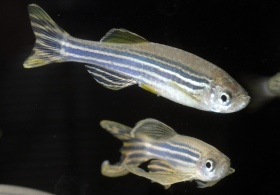 Mr Edgar, CBS site manager at Hammersmith, said: “The 360 degree Google Expedition through the CBS facility gives an overview to what an animal research facility looks like, the care and attention from professional animal technologists to a range of animal species. We hope this will aid positive opinions to the younger generation in schools and alike.”

PhD student Ms Wane said: “Working with animals almost every day is constantly inspiring me to implement and find new ways to achieve 3Rs within my work.”