A new report shows that solar panels connected directly to railways in the UK could meet a significant amount of their electricity demand.

The authors of a report from Imperial College London?s Energy Futures Lab and the climate change charity 10:10 have found that electric railways could be powered by subsidy-free solar power. The team have been investigating the potential to connect solar panels directly to the substations that provide power to the rail system. This system would use custom power electronics and bypass the electricity grid altogether. 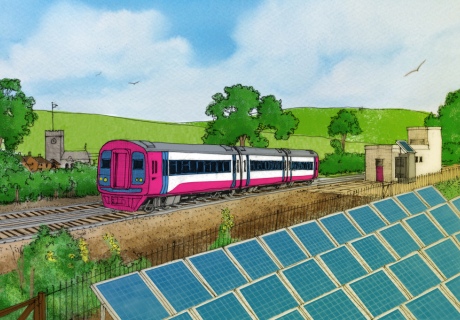 The renewable traction power project found that solar arrays and integrated energy storage devices could supply around 10% of the energy needed to power trains on the UK?s DC electrified routes each year. Crucially, the research found that this clean, renewable power could be supplied at a lower cost than electricity supplied via the grid today.

?I believe that decarbonising our transport sector is key to meeting the UK?s climate targets. The renewable Traction Power project demonstrates that we can harness solar to help make this a reality for our train network,? Professor Tim Green, Director of Energy Futures Lab and academic lead on the project, ?This project also demonstrates that the best way to tackle many of the issues we face is through collaboration and leveraging expertise from a wide range of partners.?

The biggest opportunity identified in the study is on the commuter rail network south of London. If 200 small solar farms were installed alongside railway lines they could provide 15% of the power needed to run trains on these routes. An analysis by project partners, Community Energy South, indicates that there are actually around 400 sites that could be suitable for solar traction projects in the region.

The best way to tackle many of the issues we face is through collaboration and leveraging expertise from a wide range of partners.

Alongside the benefits to commuters south of the capital, the report also has good news for the transport network in London and further afield. The team found that a similar system could provide 6% of the energy used on the London Underground and 20% of the electricity used by the Merseyrail network in Liverpool. The news was even better for electric railways closer to the equator, these could run entirely on solar power without having to rely on the local electricity grid.

The project partners are now seeking funding to develop a prototype for the new power electronics needed, and to prove the concept with around six to ten community-owned pilot projects. These will be in selected locations along rail lines in the South East.

The full report [PDF] is now available for download and will be launched at an event tonight in the London Transport Museum.

The Renewable Traction Power project was funded by Innovate UK through its Energy Game Changers programme. The project is a collaboration between 10:10, Turbo Power Systems, Community Energy South and Energy Futures Lab.