Solid start in the quest for an elusive particle New experiment begins the hunt for a hypothetical particle that could give insights into dark matter and the presence of matter in the universe.

A collaboration of Belgian, French and British scientists, including researchers from Imperial College London, have developed a technology to detect a new kind of elementary particle: the sterile neutrino. The new detector has been successfully installed and has started taking data.

A new type of neutrino would deeply change our vision of the universe and could give us a clue to what dark matter is.

Dr Antonin Vacheret, from the Department of Physics at Imperial, is the spokesperson for the SoLid (Search for oscillation with a Lithium-6 detector) collaboration. He said: “All the particles we observed in the last four decades have been predicted by our theory. This success culminated with the discovery of the Higgs boson in 2012. A new type of neutrino would deeply change our vision of the universe and could give us a clue to what dark matter is.”

Neutrinos are fundamental particles of nature but interact very weakly with matter and are therefore very difficult to detect. They were only observed for the first time in the 1950s in experiments close to nuclear reactors. Nuclear reactors produce neutrinos in large quantities and are the most intense man-made source of neutrinos.

Sterile neutrinos are more elusive than normal ‘active’ neutrinos as they don’t interact with matter and are therefore impossible to detect directly with current technologies. The experiment instead looks for indirect signs that would indicate the presence of the particle via a phenomenon called neutrino oscillation.

M. Benoît Guillon from LPC Caen in France said: “It is a bit like looking at ripples on your bed to figure out if something is hidden under the blanket. You can’t see what it is but you see the effect of it being there. That’s what we will do with reactor neutrinos.”

The new SoLid neutrino detector was successfully deployed at the SCK•CEN BR2 reactor in Mol (Belgium) in November. The reactor, which is responsible for global production of medical radioisotopes used for imaging and cancer therapy, is also an ideal place to carry out fundamental research in the field of elementary particles.

Professor Nick van Remortel, SoLid’s technical coordinator from the University of Antwerp, said: “The BR2 reactor environment is key; it turns out that it is one of the quietest places on Earth to do this experiment.”

The experiment uses a novel type of detector made up of small scintillating cubes that locate any neutrino that stops in the detector. The whole detector acts as a 3D camera recording neutrino signals with unprecedented resolution. For months, the collaboration has been assembling the 12,000 parts of the experiment and testing the 3,500 photon detectors that will ‘see’ the tiny flash of lights produced by neutrinos in the detector. 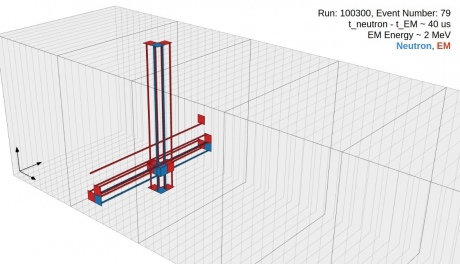 The collaboration also designed and built a calibration robot called Cross, operated successfully during the installation. The instrument provides reference signals to monitor various regions of the detector and its response to neutrinos.

The experiment is currently taking commissioning data until the end of the year and SoLid aims to provide initial findings within a year, reaching maximum sensitivity in five years’ time.