Glucose in the airways could increase infections in lung disease patients People with the lung disease COPD have higher levels of glucose in their airways, researchers have shown for the first time.

An estimated 1.2 million people in the UK have diagnosed chronic obstructive pulmonary disease (COPD), a lung condition that make it difficult to breathe because of a narrowing of the airways. Many of these people are prone to suffering from bacterial lung infections.

In the latest study, published in the Journal of Allergy and Clinical Immunology, researchers found that the concentration of glucose in the airways of people with COPD was almost twice as high as in people without the condition.

According to the authors, when subjects with COPD contracted a virus, glucose levels in their airways further increased, alongside increases in airway inflammation and increases in bacteria.

Results suggest that reducing glucose levels in the airways could provide an alternative approach to antibiotics in reducing bacterial infection of the lungs.

Lead author Dr John Tregoning, Senior Lecturer in Department of Medicine at Imperial College London, said: “When airways are rich in glucose this provides an important food source for bacteria. Healthy lungs are continually pumping out glucose and it is likely we have developed this as a protective mechanism to starve bacteria and stop infections.”

Reducing levels of glucose in the lung could provide an alternative approach that could reduce bacterial infections, and thus help patients with lung disease, while also reducing antibiotic use

“We believe that the glucose levels are higher in the airways of people with COPD because inflammation in the lungs makes them leakier so the glucose can move from the blood into the airways," added Dr Tregoning. "When people with COPD catch a virus this further increases inflammation and therefore the levels of glucose also rise, heightening the risk of a bacterial infection.”

The research analysed existing sputum samples from people with COPD. These had been collected at the Imperial Clinical Respiratory Research Unit (ICRRU) at St Mary’s Hospital in Paddington.

The analysis of the existing samples found that the average concentration of glucose in sputum samples of COPD subjects was 743 micromoles compared to 390.5 micromoles in non-COPD subjects.

Analysis also demonstrated a negative relationship between glucose concentration and forced expiratory volume (FEV), which is a measure of lung function, suggesting that glucose levels increase with the severity of COPD.

To investigate how glucose levels vary when COPD symptoms worsen, the research team also analysed samples from volunteers with COPD who had contracted a respiratory virus either naturally, or after being deliberately infected with the virus that brings on symptoms of a common cold (rhinovirus). 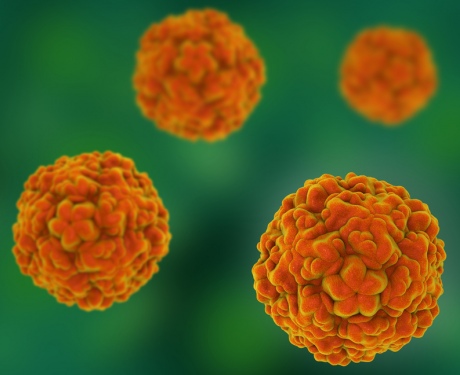 Many patients who get a viral infection, such as from rhinovirus (pictured) suffer from secondary bacterial infections

This indicates that treatments that reduce airway glucose may have the potential to reduce bacterial infections in people with COPD, without the use of antibiotics.

Professor Sebastian Johnston, co-lead author and Asthma UK Clinical Chair at the National Heart and Lung Institute, Imperial College London, said: “Many patients with lung disease who get virus infections suffer from secondary bacterial infections following the virus infection, and these tend to be treated with antibiotics. However there is a growing concern that widespread antibiotic use is leading to increasing antibiotic resistance."

When people with COPD catch a virus this further increases inflammation and therefore the levels of glucose also rise, heightening the risk of a bacterial infection.

Professor Johnston added: "Reducing levels of glucose in the lung could provide an alternative approach that could reduce bacterial infections, and thus help patients with lung disease, while also reducing antibiotic use, and thereby reducing development of antibiotic resistance.”

The researchers pointed out that the analysis included only small numbers of subjects with more severe COPD and focussed only on glucose levels in the airways, although other substances in the lung may also influence bacterial growth. They called for further research with larger numbers of COPD subjects with a range of COPD severity, to investigate the relationship between the wider metabolic profile in airways, with airway inflammation and infection.

The next step will also see the team seeking funding to investigate the use of anti-diabetic drugs such as metformin to control levels of airway glucose and therefore hopefully reduce bacterial load. Metformin is safe as it is already in use to treat diabetes. The team aim to test how effective it is at reducing bacterial infections in people with COPD.

‘Role of airway glucose in bacterial infections in Chronic Obstructive Pulmonary Disease’ by Patrick Mallia et al, is published in the Journal of Allergy and Clinical Immunology.