Over and undernutrition are the biggest public health problem facing humanity right now.

Imperial's Chair in Nutrition and Dietetics

Every year heads of state, government leaders, CEOs of multinationals and national organisations, converge on a small town in the Swiss Alps to discuss the most important global challenges.

The theme of this year's event is 'Creating a Shared Future in a Fractured World' and aims to rededicate leaders from all walks of life to developing a shared narrative to improve the state of the world. 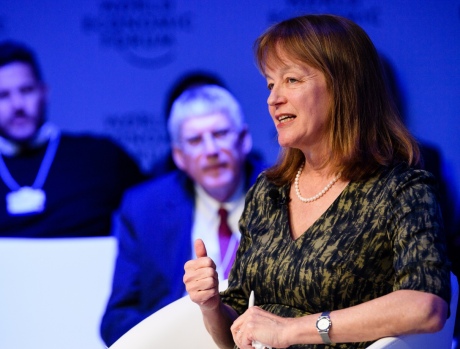 Three researchers from Imperial were invited to the week-long meeting to share their pioneering work on nutrition and food production.

President Alice Gast was also in Davos to Chair the Global University Leaders Forum and was invited to take part in a panel debate with musician and creative innovator will.i.am on the future of start-ups.

Professor Gary Frost, from the Department of Medicine, is head of Imperial's Nutrition and Food Network. Professor Frost gave a presentation titled 'Food solution to the double burden of malnutrition'.

His team are investigating whether supporting the gut microbiota can help to combat both malnutrition and over eating. 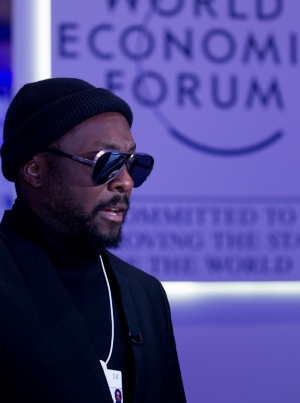 Musician and entrepreneur will.i.am takes part in a panel debate with President Gast on Friday

The traditional approach to malnutrition is to feed milk based products, but they don't feed the microbiota in the colon because they are absorbed further up the digestive system.

But legumes are a common food that can fuel and diversify the gut microbiota and the reach the colon.

Professor Frost revealed that a pilot study in Kenya showed for the first time that feeding legumes to malnourished children had positive effects on the microbiota.

The legume based feed improved the gut microbiota and may also reduce the risk of sepsis in undernourished children.

Professor Frost said: 'Over and undernutrition are the biggest public health problem facing humanity right now. Although both problems are complex our work on legumes-inspired systems holds the potential solution to both over and under nutrition.' 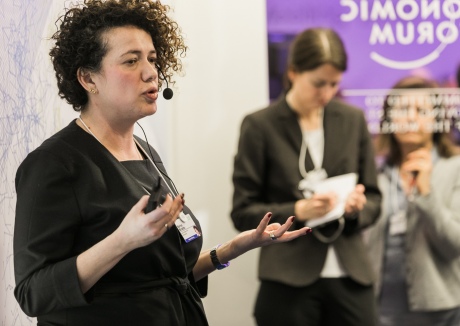 Dr Marisa Miraldo, from Imperial College Business School, presented her research into the links between personality and eating habits.

Dr Miraldo explained that current interventions to make people eat better have generally been unsuccessful so far. Her research investigated the relationship between a person's behaviour type, for example risk takers or more cautious people, and their healthy eating decisions.

She revealed that men who are more risk loving have poorer nutritional balance, while the more risk averse eat better. This could lead to designing dietary interventions linked more closely to a person's personality and behaviours.

Dr Miraldo said: "A better understanding of individual behaviours can improve our health and the economy. To make this happen we need to measure risk and self-control. In the future I would like to see GPs and public health workers measuring them alongside with sugar levels and provide personalised and effective prevention and advice."

Dr Laura Barter, from the Department of Chemistry, talked about increasing crop yields by enhancing photosynthesis - the way in which plants convert sunlight into energy to grow.

Photosynthesis is typically a very inefficient process - with the conversion of light energy into biomass stored in the plant at around just one to two per cent.

Dr Barter blames part of this inefficiency on an enzyme called Rubisco, involved in the capture of carbon dioxide from the atmosphere.

One way to improve this would be to speed up the process would be to increase the concentration of carbon dioxide near Rubisco. Some plants have already evolved to do this, but crucially not common grain crops such as rice and wheat.

Dr Barter's team are developing a chemical which mimics the behaviour of enzymes, found in both plants and animals, that could be used to give the same result, i.e increasing CO2 concentration near Rubisco. The chemical could be applied to plants like a fertiliser.

Dr Barter said: "By 2050, agricultural production will need to increase by an estimated 70% globally and by 100% in developing countries. If we are to meet this demand, crop productivity must increase in a sustainable way.

"This work has a real potential to make a significant impact."