The first-ever global assessment of mosquito net fishing (MNF), published today in the journal PLOS ONE, reveals full scale of the practice and calls for collaborative solutions.

One of the major impacts of MNF is that it traps young fish, which affects the growth of future stock. This can undermine fisheries management efforts and impact communities that depend on fish as their main source of food.

We are wholly supportive of the efforts of the healthcare community to tackle this disease, which is so damaging to many people’s lives, but there needs to be further research into the potential impacts of this unintended consequence.

The researcher team, from Imperial College London, ZSL (Zoological Society of London), and Oxford University, surveyed expert witnesses living and working in malarial zones around the world to produce a rapid global assessment of the extent and characteristics of MNF.

The study found evidence that this practice occurs to some extent across most of the world’s tropical latitudes, impacting a broad range of different marine and freshwater habitats and species.

Commenting on the study, lead author Rebecca Short from the Department of Life Sciences at Imperial and ZSL’s Institute of Zoology said: “Recent decades have seen the broad distribution of free or subsidised mosquito nets, which has had a hugely important impact on reducing incidences of malaria in developing countries.

"While anecdotal evidence has long existed about these mosquito nets often being diverted into artisanal fishing, our study represents the first concerted attempt to gauge the scale and extent of this problem worldwide.

“We are wholly supportive of the efforts of the healthcare community to tackle this disease, which is so damaging to many people’s lives, but there needs to be further research into the potential impacts of this unintended consequence.”

MNF is particularly prevalent in Sub-Saharan Africa, where it is conducted at a range of scales: from single nets used by people wading in the water to several nets sewn together and thrown from boats. However, the study also points to this activity often being conducted by vulnerable fishers, providing a valuable source of food for poor families and calling in to question whether simply criminalising MNF is an appropriate response.

As well as attempting to measure the true scale of the issue, the study makes a number of recommendations for policy priorities designed to mitigate against and address the drivers of MNF in the future. These include better planning for mosquito net distribution efforts and for their disposal after use, as part of efforts to protect marine and freshwater biodiversity whilst conserving vital fish stocks. 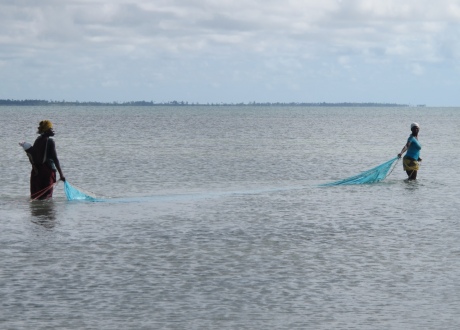 Co-author Rajina Gurung who led on the collection of eyewitness accounts while at Imperial, commented: “We tried to get our survey out to as many people in the international healthcare, conservation and fisheries communities as possible, and the response was geographically very broad. Madagascar, as an example, appears to have people fishing with these nets along much of its coastline and inland waters.”

Co-author Professor EJ Milner-Gulland from the Interdisciplinary Centre for Conservation Science, University of Oxford, added: “We hope that this study will encourage closer cooperation between healthcare, international aid/development bodies and conservationists to develop collaborative solutions to a complex issue that is linked to wider issues of poverty and food shortages in these malaria-afflicted regions.”

This research was carried out as part of Rebecca's PhD, jointly between Imperial College London and ZSL's Institute of Zoology. She is part of the Natural Environment Research Council (NERC)-funded cience and Solutions for a Changing Planet Doctoral Training Partnership, which trains and inspires a new generation of environmental experts and leaders to tackle some of the toughest challenges of our time.

'The use of mosquito nets in fisheries: a global perspective’ by Rebecca Short, Rajina Gurung, Marcus Rowcliffe, Nicholas Hill, and EJ Milner-Gulland is published in PLOS ONE. Malaria research agenda stresses the need for innovation and integration Six ways Imperial researchers are working to eliminate malaria Nearly 300,000 more could die from malaria after proposed cuts to US funding