Surgeons are treating patients with a new type of hip implant that could lead to better outcomes for younger, more active people requiring surgery.

Fifteen patients have so far been treated with a novel ceramic hip resurfacing implant in a new trial at Imperial College London. Early results suggest patients can return to physical activities such as swimming and cycling within six weeks of their operation.

The investigation, whose lead site is Charing Cross Hospital, part of Imperial College Healthcare NHS Trust, is the first in the world to resurface patients’ hips without using metal implants.

The clinical trial is designed to show that the ceramic implant is suitable for both men and women, as conventional hip resurfacing techniques are currently unsuitable for female patients,

The team hopes that the results of the investigation will lead to more treatment options for patients who require surgical replacement of a hip, and enable them to lead fuller, more active lives.

They suggest that the new device, called ‘H1’, could also reduce the risks of hip surgery, as well as save the NHS £10m a year. The technique may also give patients a higher quality of life than conventional hip replacement surgery.

Every year around 100,000 people undergo primary hip replacements in the UK, at an estimated cost of £600 million per year. Most patients have a total hip replacement (THR) where a damaged hip joint is completely replaced with an artificial one. This is typically carried out on people between the ages of 60 and 80. However, this procedure has been reported to fail in younger patients with more active lifestyles –the stiff metal stem in the thigh bone can cause trouble.

There is an alternative type of surgery known as hip resurfacing, which is carried out on younger patients. Unlike THR, the surgeon only removes the diseased cartilage of the hip joint and resurfaces the joint - until now with a metal-on-metal implant. This approach is less invasive and leaves the patient with greater mobility after surgery.

More of the bone is left in the hip joint, so the patient feels more normal, and can be more active. For young active patients, metal hip resurfacing already lasts longer than total hip replacement. However, in some patients, metal particles are released by the implant, causing tissue reactions around this such as swelling and soreness. This can lead to resurfacing implants failing and patients requiring further surgery.

Furthermore, women are unable to have hip resurfacing surgery, as the metal implant doesn’t fit their hips bones properly leading to higher failure rates. As a result, women can’t have this surgery and their only option is a total hip replacement, whatever their age.

Professor Justin Cobb, Chief Investigator, said: “In this safety study, we are ensuring that the H1 hip resurfacing implant can be used safely on patients needing hip replacement surgery. Hip resurfacing is an alternative, more conservative type of surgery that enables a higher level of physical activity than total hip replacement. The metal hip resurfacing implants developed 20 years ago have been highly successful, but some patients have had problems with tissue reactions around the hip owing to the release of metal ions.” 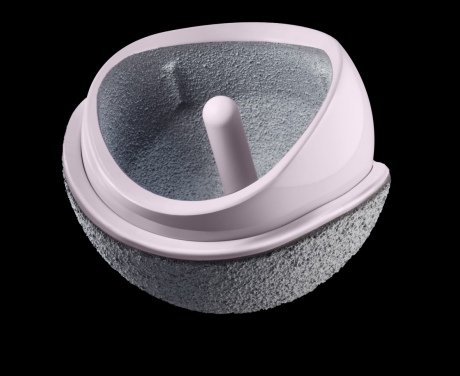 Unlike other hip resurfacings, the H1 implant is made of ceramic that is strong, low wearing and non-toxic. The researchers believe that by swapping the metal material with ceramic, the advantages of hip resurfacing surgery are kept, while the possibility of problems arising from the metal ions released is removed.

Professor Cobb added: “The H1 hip resurfacing implant is made from ceramic and designed to fit the contours of both male and female hips, so may avoid the problems seen with metal hip resurfacing. The ceramic used in the H1 is the same material used for the ball head in most hip replacements in the world today. The early results are promising. We hope to move from the safety study into a full scale efficacy study in the spring, involving more patients in centres around the UK and Europe. The trial is designed to demonstrate that total hip replacement can be postponed or avoided for younger and more active patients, enabling them to lead fuller more active lives.”

In the video above, David Brewer and Krystyna Plater, two implant recipients, talk about why they took part in the clinical investigation and the impact of their new implants. The video also features an interview with Professor Justin Cobb, Head of academic orthopedic surgery at Imperial College London. He explains more about how the implant works and the results of the investigation so far. The video also includes an interview with Brogan Keane, Physician Associate at the MSk Lab, Imperial College London.

The first fifteen patients with degenerative hip joint diseases such as osteoarthritis were recruited to the investigation between September and December 2017. Scans were taken of each patient’s hip before and after surgery, as well as post-operatively at six weeks to evaluate hip function. A blood sample was also taken before and after surgery to monitor the levels of metal ions following the operation.

The team has found that patients were able to return to physical activities such as swimming, cycling and walking within six weeks of their operation. By three months, patients were able to return to those activities they couldn’t do before, including dancing, yoga and gym work, like total hip patients, but a little quicker. Full recovery will take longer.

The researchers will recruit a total of 250 patients to the clinical investigation from hospitals across the UK and the rest of Europe. The patients will be followed up over ten years to assess how the implant is performing.

The team will apply for CE marking, a symbol shown on devices demonstrating that they conform with relevant EU medical devices directives, so that the implant can be used across hospitals outside of the clinical investigation, across Europe and beyond.

The clinical investigation is funded by Embody Orthopaedic – a spin-out from Imperial Innovations, based around intellectual property developed by a PhD student at Imperial. It is an example of the work carried out by Imperial College Academic Health Science Centre, a joint initiative between Imperial College London and three NHS hospital trusts. It aims to transform healthcare by turning scientific discoveries into medical advances to benefit local, national and global populations in as fast a timeframe as possible.

For more information on the clinical investigation please visit: https://www.clinicaltrials.gov/ct2/show/NCT03326804.

Me and my operation: The ceramic hip that keeps younger active patients running