Hunt for dark matter closes in at Large Hadron Collider

Imperial physicists celebrate the latest results from the CMS particle detector at CERN, which are better and faster than expected - <em>News</em>

Physicists are closer than ever to finding the source of the Universe's mysterious dark matter, following a better than expected year of research at the Compact Muon Solenoid (CMS) particle detector, part of the Large Hadron Collider (LHC) at CERN in Geneva.

The scientists have now carried out the first full run of experiments that smash protons together at almost the speed of light. When these sub-atomic particles collide at the heart of the CMS detector, the resultant energies and densities are similar to those that were present in the first instants of the Universe, immediately after the Big Bang some 13.7 billion years ago. The unique conditions created by these collisions can lead to the production of new particles that would have existed in those early instants and have since disappeared.

The researchers say they are well on their way to being able to either confirm or rule out one of the primary theories that could solve many of the outstanding questions of particle physics, known as Supersymmetry (SUSY). Many hope it could be a valid extension for the Standard Model of particle physics, which describes the interactions of known subatomic particles with astonishing precision but fails to incorporate general relativity, dark matter and dark energy.

Dark matter is an invisible substance that we cannot detect directly but whose presence is inferred from the rotation of galaxies. Physicists believe that it makes up about a quarter of the mass of the Universe whilst the ordinary and visible matter only makes up about 5% of the mass of the Universe. Its composition is a mystery, leading to intriguing possibilities of hitherto undiscovered physics.

Professor Geoff Hall from the Department of Physics at Imperial College London, who works on the CMS experiment, said: "We have made an important step forward in the hunt for dark matter, although no discovery has yet been made. These results have come faster than we expected because the LHC and CMS ran better last year than we dared hope and we are now very optimistic about the prospects of pinning down Supersymmetry in the next few years." 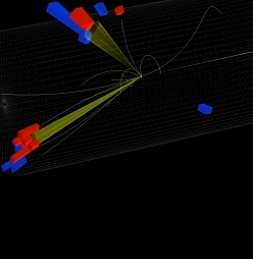 One of the earliest CMS events found showing evidence of two jets. The blue and red columns represent energy deposited in the detector, while the yellow curved lines are measured tracks of particles.

The energy released in proton-proton collisions in CMS manifests itself as particles that fly away in all directions. Most collisions produce known particles but, on rare occasions, new ones may be produced, including those predicted by SUSY – known as supersymmetric particles, or 'sparticles'. The lightest sparticle is a natural candidate for dark matter as it is stable and CMS would only 'see' these objects through an absence of their signal in the detector, leading to an imbalance of energy and momentum.

In order to search for sparticles, CMS looks for collisions that produce two or more high-energy 'jets' (bunches of particles travelling in approximately the same direction) and significant missing energy.

Dr Oliver Buchmueller, also from the Department of Physics at Imperial College London, but who is based at CERN, explained: "We need a good understanding of the ordinary collisions so that we can recognise the unusual ones when they happen. Such collisions are rare but can be produced by known physics. We examined some 3  trillion proton-proton collisions and found 13 'SUSY-like' ones, around the number that we expected. Although no evidence for sparticles was found, this measurement narrows down the area for the search for dark matter significantly."

The physicists are now looking forward to the 2011 run of the LHC and CMS, which is expected to bring in data that could confirm Supersymmetry as an explanation for dark matter.

The CMS experiment is one of two general purpose experiments designed to collect data from the LHC, along with ATLAS (A Toroidal LHC ApparatuS). Imperial’s High Energy Physics Group has played a major role in the design and construction of CMS and now many of the members are working on the mission to find new particles, including the elusive Higgs boson particle (if it exists), and solve some of the mysteries of nature, such as where mass comes from, why there is no anti-matter in our Universe and whether there are more than three spatial dimensions.