Park Geun-hye, President of the Republic of Korea, has addressed leading figures from science, industry and government at Imperial.

The UK-Korea Creative Economy and Future Science Forum at Imperial was the landmark science and innovation event of the President’s State Visit to the UK, taking place at the invitation of The Queen from 5 to 7 November.

It gives me great pleasure to be at the world renowned Imperial – famous for its cutting edge research in science and technology.

President of the Republic of Korea

President Park outlined her vision for a “creative economy”, driven by science, R&D and innovation, in partnership with leading scientific nations like the UK.

Speaking at the event she said: “I sincerely congratulate the opening of the UK-Korea Creative Economy and Future Science Forum and I would also like to express my gratitude to the UK Government and Imperial College London for organising this meaningful event.”

“It gives me great pleasure that we have gathered at the world renowned Imperial College London – famous for its cutting edge research in science and technology –  together with scientists, businessmen and experts from the UK and Korea to discuss the future of the creative economy.” 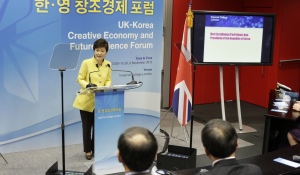 UK Science and Universities Minister David Willetts joined President Park at Imperial and spoke about the government’s support for “eight great technologies”, and Imperial’s important role in their development.

Speaking at the event Mr Willetts said: “In the UK as in Korea, scientific research and innovation are key to economic success and this cannot be achieved without the work that is being done in our universities; however we’re very much aware that scientific research by its nature is a collaborative activity and that no one country has monopoly on good ideas.

“Like many of our leading universities Imperial is an outward looking institution, that realises the need to collaborate far and wide to tackle the big global issues and to make the most of international creativity and innovation. This of course includes collaboration with Korea where they have developed extensive links with leading researchers including those at KAIST, POSTECH and the Seoul National University as well as with industrial partners such as Samsung and LG."

On her tour of the College, President Park viewed an ‘invisibility cloak’ demonstrating the potential of metamaterial technology and witnessed a live surgical simulation. Other groundbreaking research on display at Imperial included medical robotic body sensing technology, plastic electronics, quantum technologies, and the latest applications of data science – fields where UK researchers are world-leaders.

Professor James Stirling CBE FRS, Provost of Imperial College London, said: “We are honoured that President Park has chosen Imperial for such a significant part of her State Visit.

Imperial College London is crucial to many of the eight great technologies including big data, robotics, space and synthetic biology.

“Britain and Korea are united by our shared passion for science and innovation, and Imperial is playing a major role in forging these bonds. Imperial academics published over 1,000 research papers with Korean colleagues in the last decade alone, while hundreds of our students, academics and alumni are strengthening UK-Korean relations every day.

“At Imperial we foster the very best basic research and apply it for the benefit of our economy and society. It is highly welcome that President Park – a trained engineer – is pursuing a complementary agenda for Korea.

“Korea’s rapid development in science, technology, engineering and business is good for the whole world. There is a sense of excitement among the UK scientific community at the prospect of building further ties with their Korean peers.”

Science and Universities Minister David Willetts MP said: “International collaboration across Higher Education is essential if the UK is to remain ahead in the global race for science and innovation. Imperial College London is crucial to many of the eight great technologies including big data, robotics, space and synthetic biology. Working alongside the Republic of Korea will strengthen our relationship and allow greater collaboration in years to come.”

In addition to speeches from President Park, David Willetts and Professor Stirling, the programme at Imperial featured workshops for  academics, investors and entrepreneurs from both nations to explore additional UK-Korean collaboration and development in the following fields:

Ahead of the President’s visit, Imperial signed an agreement to enhance UK-Korean cooperation in hydrogen and fuel cell technologies, leveraging funding from both governments, industry and academia to stimulate work between the UK’s Imperial-led H2FC Supergen Hub and Korea’s POSTECH-hosted Hydrogen & Fuel Cell Test Bed Centre.

Imperial also signed a strategic partnership between the College and the Korean Advanced Institute of Science and Technology (KAIST).