Patients receive the therapy by inhaling fat globules containing DNA from a nebuliser.

A therapy that replaces the faulty gene responsible for cystic fibrosis in patients' lungs has produced encouraging results in a major UK trial.

One hundred and thirty six patients aged 12 and over received monthly doses of either the therapy or the placebo for one year.

The clinical trial reached its primary endpoint with patients who received therapy having a significant, if modest benefit in lung function compared with those receiving a placebo.

Patients from across England and Scotland participated, and were treated in two centres, Royal Brompton Hospital in London and the Western General Hospital in Edinburgh.

The trial is the first to show that repeated doses of gene therapy can have a meaningful effect on the disease, and change the lung function of patients. However, the team say more research is needed to improve the effectiveness before the therapy will be suitable for clinical use.

The study was carried out by the UK Cystic Fibrosis Gene Therapy Consortium, a group of scientists and clinical teams from Imperial College London, the Universities of Oxford and Edinburgh, Royal Brompton & Harefield NHS Foundation Trust and NHS Lothian who came together in 2001 to develop a gene therapy, supported by the Cystic Fibrosis Trust.

The current trial was launched in 2012 and funded by a partnership between the Medical Research Council (MRC) and the National Institute for Health Research (NIHR). The findings are published today in The Lancet Respiratory Medicine.

Cystic fibrosis (CF) is the commonest lethal inherited disease in the UK, affecting around 10,000 people nationally and over 90,000 worldwide. Patients’ lungs become filled with thick sticky mucus and they are vulnerable to recurrent chest infections, which eventually destroy the lungs.

The cause of CF, mutations in a gene located on chromosome 7, was identified in 1989, opening the door to introducing a normal copy of this gene using gene therapy. In the trial, patients were treated by inhaling molecules of DNA wrapped in fat globules (liposomes) that deliver the gene into the cells in the lung lining. 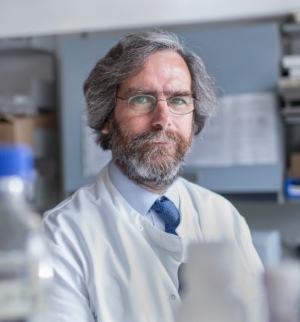 Professor Eric Alton, the coordinator of the Consortium from Imperial College London, who is also a consultant physician at Royal Brompton Hospital, said: “Patients who received the gene therapy showed a significant, if modest, benefit in tests of lung function compared with the placebo group; there were no safety concerns. Whilst the effect was inconsistent, with some patients responding better than others, the results are encouraging, laying the groundwork for further trials which we hope could improve the effect.

“We are looking to undertake follow-up studies assessing higher, more frequent doses as well as combinations with other treatments. The programme of work came about through the generosity of the CF community via the CF Trust, whilst the trial exemplifies how effectively the MRC and NIHR, working in partnership, are able to move laboratory science into patient benefit. Publication of this trial is a landmark for CF patients and we are particularly grateful to the many patients across the UK who gave their time and effort to participate and make this collaborative venture a success.”

Minister for Life Sciences, George Freeman said: “Cystic Fibrosis can have a devastating effect on patients and families and this is an excellent development for people living with the condition. The government is absolutely committed to supporting new medical treatments and invests £1bn a year in health research. It is vital we are at the forefront of turning scientific discoveries into tangible benefits and affordable treatments for NHS patients.”

Imperial Innovations, Imperial's technology commercialisation company, is acting as the lead technology transfer office for the consortium. Innovations holds a family of patents and orphan drug designation for the treatment, and is seeking commercial partners who can support its further clinical development.

The consortium is developing a second therapy that uses a virus to deliver the DNA into cells. They are aiming to begin the first clinical trial of this treatment in 2016.

“Our aim is to achieve a step change in the treatment of CF that focuses on the basic defect rather than just addressing the symptoms. It has taken more than 20 years to get where we are now, and there is still some way to go. Eventually we hope gene therapy will push CF patients towards a normal life expectancy and improve their quality of life significantly,” said Professor Alton.

Ed Owen, Chief Executive of the Cystic Fibrosis Trust, said: “We are committed to improving and transforming the lives of people with cystic fibrosis, and the results of this pioneering clinical trial are a promising development. Further clinical research is now needed before we can say that it is a viable clinical therapy but it is encouraging that a proof of concept has been established.

“The Gene Therapy Consortium (GTC) has been supported by the cystic fibrosis community for many years and the Cystic Fibrosis Trust is proud to have funded the initial programmes that led to this trial. We have also committed a further £500,000 over the next two years to support the infrastructure of the consortium and to allow further development of its longer-term work to develop a viral vector gene therapy.

“This is an extraordinary time for therapeutic development in cystic fibrosis and the need is urgent to stop so many young lives being cut short because of this cruel condition.  We will therefore continue to invest in innovative genetic research and to work with academic and industry partners to develop advancements which will make further progress towards our goal of a life unlimited by cystic fibrosis.” Mary Bondonno, 16, from Morden, Surrey, took part in the trial and was given the gene therapy.  Mary’s lung function went from 66.72 per cent to 80.29 per cent at the end.

“Before the trial I found it very difficult to clear my lungs of mucus," she said. "I spent a lot of time in hospital because of repeated infections. Activities like PE at school would leave me out of breath very quickly.

"This all changed for me once I went on the trial and within a month of getting the first dose of the gene therapy I noticed improvements in my condition.  I was able to clear my lungs better, concentrate more at school because I wasn’t as tired and I was able to do more with my family like go for walks with them for long periods of time.

"It felt good to see my condition improving and I felt better overall.  I had a great experience on the trial and I’m glad that I took part in it because the gene therapy had such a positive impact on my life.”