Imperial and the China Scholarship Council (CSC) have signed a new agreement to support talented Chinese students at the College.

The agreement, which was signed on Wednesday as President Xi Jinping visited Imperial, launches a new Joint Programme for Innovative Talent Training between Imperial and the CSC. Over the next three years, the Programme sees the CSC commit funding for 10 Chinese Visiting Scholars per year to spend up to one year at Imperial, as well as partial scholarships (tuition only) for 10 Chinese students per year to undertake one-year Master’s degrees at Imperial. The Programme also allows for 10 Imperial PhD students per year to visit top Chinese universities during the course of their studies.

When I meet Chinese students at Imperial, I am filled with optimism about the future

The programme builds on the success of the joint CSC Imperial Scholarships, which already enable some of China’s best and brightest students to undertake PhDs at Imperial. More than 40 Imperial students have benefited from this scheme since it was launched in 2012. The scheme was renewed in September 2015 for a further three years, opening up fifteen full scholarships each year to Chinese students of outstanding academic merit and potential. 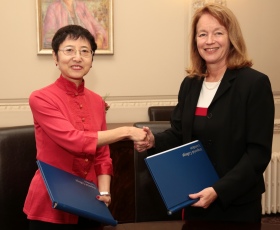 The agreement for the Joint Programme for Innovative Talent Training was signed by Imperial’s President, Professor Alice Gast, and the Secretary General of the China Scholarships Council, Dr Liu Jinghui.

Addressing President Xi as he visited Imperial earlier this week, Professor Alice Gast said: “The challenges facing our world require a new generation of leaders. At Imperial, we educate many intelligent and innovative Chinese students in a vibrant, research-led, entrepreneurial environment. We provide our students with the knowledge and experiences that equip them for their future roles as leaders. When I meet Chinese students at Imperial, I am filled with optimism about the future.”