People who exercise regularly may develop hearts that are larger

Scientists have shown that people who exercise for even a few hours each week can enlarge their hearts.

This is a normal and beneficial response to exercise that until now has only been recognised in athletes. Scientists have not previously known the extent to which the hearts of healthy people adapt to the demands of moderate exercise.

“It’s well known that the hearts of endurance athletes adapt in response to exercise, a phenomenon called ‘athlete’s heart’. This study is the first to show that healthy adults who do regular exercise may also develop enlarged hearts. As a result, there’s a risk that some active adults could be misdiagnosed with heart disease,” says Dr Declan O’Regan, of the MRC Clinical Sciences Centre, at Imperial College London, and one of the lead scientists on the research.

Over 1,000 people took part in this study, making it one of the largest of its kind. The findings were published today in  Circulation: Cardiovascular Imaging.

Participants selected one of four possible categories that best represented their activity level over the past year, according to how many hours of exercise they did each week.

Around one third of participants reported doing three to five hours of exercise, and the scientists found that one in five of these people had developed an enlarged heart as a result.

Similar adaptations were seen in almost half of those who reported doing more than five hours of exercise. 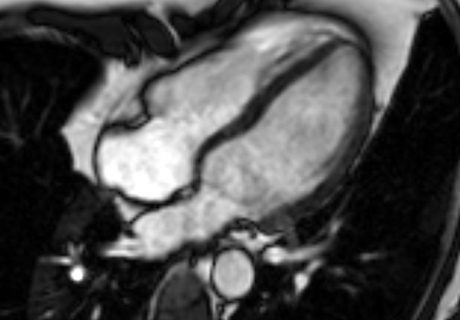 The findings suggest that above a threshold of three hours, the more exercise you do, the more your heart is likely to adapt, and the more the exercise, the more pronounced the changes.

“Going to the gym frequently increases the thickness of your heart muscle and the volume of your heart chambers, particularly the right ventricle. It’s a completely normal, healthy response. It shouldn’t be misdiagnosed as being heart disease,” says O’Regan.

These adaptations allow the heart to pump more blood, which helps to supply exercising muscles with the oxygen and nutrients they need. Changes to the heart’s thickness and volume happen in tandem, and this distinguishes them from the changes seen in disease, which occur in isolation.

Today, doctors across the world use a standard of set values to see if the thickness and volume of a person’s heart fall into the healthy or abnormal range. This helps to ensure consistency between different hospitals.

According to O’Regan, the data that underpins these ranges comes from a relatively small study with people who were mainly sedentary. He says, “In this latest study, we looked at a much larger and broader group of people. We found that more people reported being active than had done in previous studies. Our recommendations reflect this growing participation in exercise.”

Doctors already account for an individual’s height, age and gender - factors which are known to change the shape and structure of a person’s heart. Just like these factors, a person’s activity level could be established easily and quickly in the clinic.

“This study was based on an everyday clinical problem. We frequently look at cardiac scans where people have enlarged hearts, and whilst they may have a family history of heart disease, they also do regular exercise. So the question is, have they actually got inherited heart disease, or is it just that they’re active?” says O’Regan.

Knowledge of a person’s exercise level can now be used together with a heart scan and measures such as an electrocardiogram, or ECG, to identify those who may need treatment.

At the beginning of the study, Dr O’Regan and his co-lead, Professor Stuart Cook of Imperial’s National Heart and Lung Institute, analysed the genes of participants to rule out those with a family history and predisposition to heart disease. This allowed them to be confident that all of the eventual participants did indeed have healthy hearts, and any changes in their heart structure were the result of exercise.

Dr Noel Faherty, Research Advisor at the British Heart Foundation, which helped fund the research, said: “Detectable changes to the heart on an MRI scan are common in elite endurance athletes but some heart conditions, like cardiomyopathy, can be diagnosed by detecting similar changes.

“This study demonstrates the importance of documenting the MRI appearance of healthy, active people’s hearts so normal adaptive changes are recognised by doctors and not mistaken for disease.” Daily Mail: An enlarged heart might mean you're MORE healthy