Luca Alessandrini beat hundreds of other entries from 49 countries to take home the £10,000 prize at the International Student Innovation Awards.

Luca’s project, a violin which is made from a mixture of spider silk and resin, was developed during his MSc in Innovation Design Engineering, run jointly between the Royal College of Art (RCA) and Imperial's Dyson School of Design Engineering.

When the violin is played, the spider silk vibrates the instrument’s casing, emitting a sound which can be customised by tweaking the exact blend of the material.  The combination of silk and resin produces a unique tone which can be altered by blending different quantities of the raw materials.

The International Student Innovation Awards was set up to highlight the work of the city’s international students and also to provide some financial help to assist students in taking their innovation to the next stage of development. It was devised by London & Partners, the Mayor’s official promotional company and is also supported by the UK Government’s Education is GREAT campaign and the British Council,Cambridge English, IDP Education and The PIE.

Luca, originally from Urbino, Italy, said: “Studying in London has been one of the best experiences in my life and this incredible initiative will allow me to bring my project closer to reality.

“I have spent two years working full time with 38 people from 14 different countries and I couldn’t imagine a more supportive and stimulating environment than this city.”

Luca says the new material could allow the acoustics of instruments and sound equipment to be customised with a degree of control that is difficult to obtain with other modern materials such as carbon fibre. 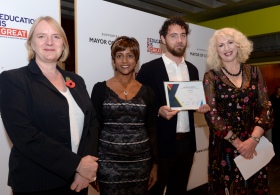 Luca added: “I wanted to create a violin from the very beginning. I wanted to be provocative and the violin is the most iconic musical instruments with a huge culture and history behind it.

“I was focussing on acoustics as a field in my masters. Material acoustics has not been home to many innovations, they’re still making speakers out of plywood for example which is expensive, heavy and unsustainable. So there was a lot of room for innovation.”

Lord Karan Bilimoria of Chelsea, President of the UK Council for International Student Affairs and one of the judges of the prize, said: “All of the entries were very interesting and innovative, but the world loves high-tech, configurable manufacturing. It is a world-changing area of industry, providing us with innovative ways of building everything from homes to aircraft and even food and drink.

"Luca has applied a highly advanced knowledge of acoustics and composite materials to music-making, and his idea will inspire other people to break down the barriers of what innovation can achieve.”

Entries from Imperial students made up eight of the fifteen projects in the final – and two of these projects won second and third place at last night’s competition.

Second place went to Kitty Liao from the Dyson School of Design Engineering, and Abellona U from theDepartment of Surgery and Cancer. The pair have developed a vaccine delivery system which could potentially help to save lives around the world.

Each year millions of dollars are wasted on vaccines which perish during the last mile of their journey. Their design has a unique recyclable and temperature controlled system, which means vaccines can be kept cool over an indefinite period of time so that they are no longer compromised when they reach their destination.

Third place went to Elena Dieckmann from the Dyson School of Design Engineering, who has used recycled waste chicken feathers to create building materials, such as water repellent paint, thermal insulation and a range of consumer goods including tooth brushes.

The Dyson School of Design Engineering is the 10th and newest engineering department at Imperial College London. It was formed in July 2014. The Head of School is Professor Peter Childs. Italian wins ??10,000 prize for London???s most innovative foreign student with silk violin London, the invention of the year by an Italian student