An artist's impression of the new White City campus

From 2019 it will be hosted on the College’s newest campus at White City, which is currently under development in West London.

The UK DRI at Imperial, which will be led by Professor Paul Matthews of the Division of Brain Sciences in the Department of Medicine, will initially be based at the Hammersmith campus before moving to the College’s new White City Campus.

Imperial’s team presented not only an excellent and ambitious programme of work, but one that was different and creative, and drew on the university’s unique strengths

The UK DRI is being established by a joint £250 million investment into dementia research from the Medical Research Council (MRC) and its charity partners, the Alzheimer’s Society and Alzheimer’s Research UK.

Established in response to the Government’s 2020 Challenge on Dementia, the DRI’s mission is to find new ways to diagnose, treat and prevent and care for people with dementias, a group of neurodegenerative disorders which includes Alzheimer’s, Parkinson’s and Huntington’s disease.

Scientists at the UK DRI at Imperial will work closely with those at University College London (UCL), which was named as a centre and the headquarters for the national institute in December 2016, simultaneously with announcement of appointment of the UK DRI Director, Professor Bart De Strooper, who has moved to UCL to assume this role from a previous post in the Catholic University of Leuven, Belgium.

The UK DRI intends to combine world-leading expertise across the spectrum of dementia research in its constituent centres in order to maximise the benefits arising from the cutting-edge facilities and expertise at each institution.

Professor Matthews, who will lead the UK DRI at Imperial, said: “Our multidisciplinary approach will harness Imperial’s technology and data expertise to address the challenges posed by dementia. In doing so, we are attracting experts from different fields who have exciting new ideas and have not previously been involved in dementia research.” 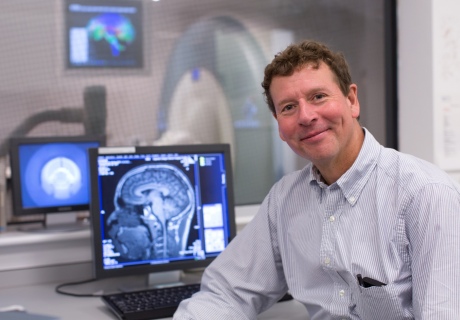 Professor Paul Matthews will lead the UK DRI at Imperial

“As part of its commitment to the institute, the College will invest in five new positions to further strengthen the team of experts, as well as create five clinical and non-clinical studentships within the institute.

“Being part of the UK DRI highlights Imperial’s commitment - since its foundation - to deliver solutions for major problems in our society by harnessing the best, most modern science,” added Professor Matthews.

“This exciting new venture will help us understand disease-related brain changes in the context of the body’s health and exposures. Within the nationally and internationally networked environment of the institute, Imperial can further champion our interest in addressing big problems through open, collaborative research.”

Professor Bart De Strooper said: “The shared vision between the centres will be at the heart of the UK DRI’s success, and this creativity at the borders will lead us to truly understand dementias and how they progress.

“We selected the centres based on innovative, excellent science, evidence of strong leadership, the alignment of goals with the institute as a whole, and the ability to grow and collaborate as the institute gathers pace.

“Imperial’s team presented not only an excellent and ambitious programme of work, but one that was different and creative, and drew on the university’s unique strengths.

"I can’t wait to see how Professor Matthews’ vision and unparalleled knowledge in the role microglia play in other conditions brings new insights to dementia research.”

Science Minister Jo Johnson said: “Dementia affects millions of people around the world, but through greater understanding we can make significant steps forward to improve lives.

“Today’s announcement of the institute’s centre locations demonstrates the UK’s existing wealth of knowledge and research expertise, and the leadership role we can take in developing new treatments to tackle this disease. This is exactly the type of project our Industrial Strategy will build on to ensure the UK remains at the forefront of global science.”

Following the announcement of the centres and their foundation programmes, recruitment will begin to establish a number of a core programmes. The institute is seeking talented researchers from around the world, from a wide variety of fields, to fill knowledge gaps in dementias research and enrich expertise. Read more about the UK Dementia Research Institute. Comment on COVID-19: Imperial researchers model likely impact of public health measures : i do not have a medical background. I am just a dumbarse if forgive the expression. but i was wonder…

Comment on COVID-19: Imperial researchers model likely impact of public health measures : Whilst your emphasis is understandably centrally-focused upon an epidemological model, based upon co…

Comment on COVID-19: Imperial researchers model likely impact of public health measures : I don't see that you're asking for volunteers to test the vaccine yet. Please contact me if you need…