London universities collectively contribute £17 billion to the city’s economy and supporting the 88,000 jobs it creates. 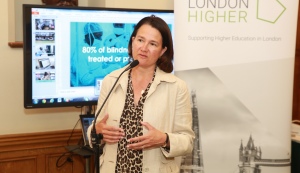 Welcoming guests to the event Catherine West, MP for Hornsey and Wood Green, spoke of the benefits of an international higher education sector brings to the UK.

She said: “We know how important it is to get the best minds here to London and elsewhere in the UK. We know that education is one of our most important exports and we know the importance of education to our economy.” 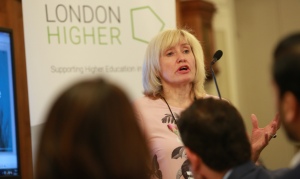 Professor Higham, previously Vice Dean for Institutional Affairs and Director of Education in the Faculty of Medicine at Imperial, spoke of her experiences of research in life sciences and the great ideas that international collaboration brings.

She said: “We as universities generate new knowledge and we cannot underestimate the economic benefit that that brings. Research is also key in the UK’s reputation on the international stage and the relationships and we have with our collaborators around the world.

“In London there are 30,000 life science graduates, we have an amazing infrastructure of medical schools, academic health science centres and the Sir Francis Crick Institute. We have the resources and the capacity to lead on health related research here in London.” 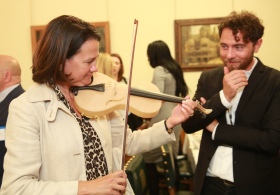 Luca demonstrated his innovation -  a violin which is made from a mixture of spider silk and resin, which was developed during his MSc in Innovation Design Engineering, run jointly between the Royal College of Art (RCA) and Imperial's Dyson School of Design Engineering.

His innovation saw him named London’s most entrepreneurial student at last year’s International Student Innovation Awards, an award programme set up to highlight the work of the city’s international students and provide financial help to assist them in taking their innovation to the next stage of development.

Luca, originally from Urbino, Italy, said: “Studying in London has been one of the best experiences in my life.”

“I have spent two years working full time with 38 people from 14 different countries and I couldn’t imagine a more supportive and stimulating environment than this city.”

“We’re going to be small scale, artisanal and specialist. We’re taken some pre-orders and we’re hoping to ship the first instruments in September”, Luca added.