Four students who invented a mosquito repellent device spent the day with Imperial malaria researchers finding out about the latest science.

Zack Glindon, Alex Handley, Tom Hollingsworth and Cameron Woodhouse from Gillingham School in Dorset won the Rotary Prize for Medical / Scientific Advancement at this year’s Big Bang Competition, for their invention the ‘morbosphere’.

Following their win, Rotary in Great Britain and Ireland and Imperial College London teamed up to give the students a chance to see some malaria research in action, and to test their prototype. 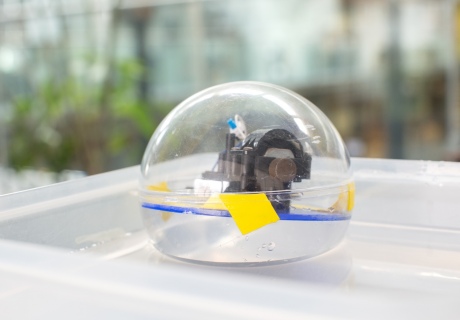 The morbosphere is a floating, clear plastic sphere containing a motor and a solar panel to power it. The idea is that the sphere will sit in stagnant water pools, like water butts, and vibrate constantly, disturbing the surface of the water.

Since mosquitoes need still water in which to lay their eggs, and for the eggs and pupae to develop, their hope is that the morbosphere could disrupt the lifecycle of mosquitos, preventing them from spreading malaria.

Tom said: “When we looked into malaria prevention, we found that most research focuses on stopping the mosquito biting or stopping the parasite from infecting people. Controlling the mosquito eggs used to be done with pesticides, but these are now banned, so we wanted to find a new cheap solution that affected the eggs but not the water.” 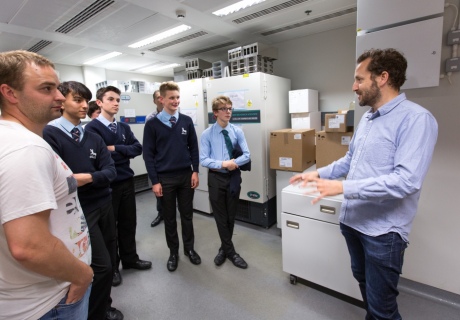 Dr Jake Baum explains the work of the parasite lab

The team heard from members of the Imperial College Network of Excellence in Malaria who talked about their own research, from genetically engineering mosquitoes to tackling the parasite and finding out why some people get more ill from malaria infection than others.

They also had a chance to visit the malaria research labs and the insectary, where they gave the morbosphere its first test run where it floated and vibrated in the presence of mosquito eggs. They then discussed how it might be further developed with the researchers. 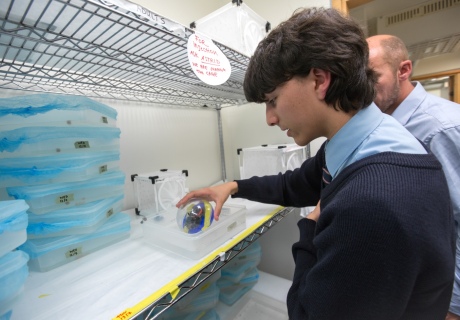 Dr Jake Baum, from the Department of Life Sciences at Imperial, and one of the host researchers said: “In establishing the Imperial College Network of Excellence in Malaria, our key aims revolve around bringing interdisciplinary science together and specifically bringing together new technologies with biological observations for the malaria eradication agenda. The students work clearly impacts in these areas so we were keen to see their idea in action.

“It is a unique opportunity for high school students to get insights into how academic science works and to encourage them that their innovative solutions could realistically be tested and transformed into real life devices - i.e. that their innovation, irrespective of their age, might actually make a difference, or set the groundwork for something in the future that could.” 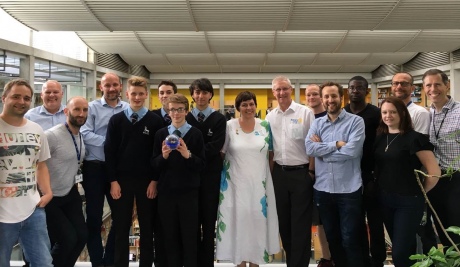 Denis Spiller, President of Rotary in Great Britain & Ireland, and Gillian Pearce from the Rotarians Eliminating Malaria Rotary Action Group, also joined the students on their tour. Gillian said: “We provide malaria support on the ground in terms of research funding, education and ideas sharing.

“With youth competitions like these we get the chance to develop people and help them innovate, so that we have solutions to these issues in the future.”

Dr Tony Nolan, also from the Department of Life Sciences at Imperial said: “Visits and interactions like this allow students to explore all of their options for higher education and careers. It’s important to give them something to aspire to, it builds their confidence and makes them more likely to succeed in whatever they do, even if it isn’t science."