Scientists have modelled what happens to the brain of an American footballer when he collides forcefully with another player. The study, conducted by researchers at Imperial College London, was carried out to understand in more detail the link between traumatic brain injury (TBI) and chronic traumatic encephalopathy (CTE). The latter is a form of dementia and causes a long-term build-up of proteins called tau, associated with the degeneration of brain tissue and declining health.

TBI occurs when an external force impacts on the brain. People who have been involved in one-off TBI incidents such as motorcycle accidents, and sportspeople like footballers who have repetitive TBIs from collisions on the field, are both vulnerable to CTE. Scientists believe there is a link between the initial impact in a TBI and where tau deposits build up in the brain.

Now, Imperial researchers have modelled how brain tissue deforms during an impact between two American football players on the field. They have also modelled what happens to a person’s brain when they have a ground 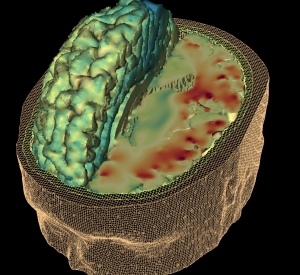 level fall and the initial impact to the brain in a motorcycle accident. They compared their 3D high-fidelity models to MRI data on a cohort of 97 patients with TBI, and studies on post-mortem data of the brains of footballers from America's National Football Association (NFL) with CTE, previously donated to science institutes in America for analysis. They observed tau deposition in the brains, which was then diagnosed as CTE.

Dr Mazdak Ghajari, an engineer who co-led the study from the Dyson School of Design Engineering at Imperial College London, said: “In TBI, the force of the blow shakes the brain, which is similar in texture to jelly. This shaking process deforms the brain tissue and can cause ruptured blood vessels and damaged nerve cells, and more severe complications later on. We’ve been able to replicate those initial moments when the ‘jelly’ brain is first deformed on impact, by combining engineering principles and medical knowledge. This is providing us with new insights.” 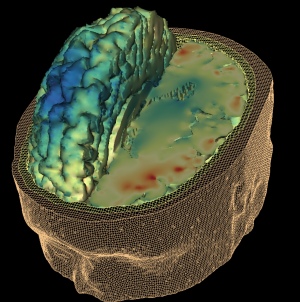 A model of a motorcyclist's brain with TBI (red)

The Imperial team showed in all their 3D models that the damage created from a TBI is greatest in the depths of the folds on the surface of the brain called sulci. Previous studies on CTE have shown that tau also accumulates in sulci. In addition, the team discovered that the location and severity of the blow to the head on impact can have a significant influence on the magnitude and pattern of the injury later on when CTE develops.

The researchers say further clarification of these links in future studies will be the key to analysing the long-term effects of head impacts. This could lead to new improvements in protective strategies, including new types of helmet designs.

Dr Ghajari added: “Current technologies for assessing helmet safety are pretty crude. Our work is still in the early stages, but we believe that it shows promise for more accurately modelling how the brain deforms in different types of impacts. Using this knowledge we could refine the design of particular areas of helmets so that they could withstand collisions associated with particular types of sports. We could also design headgear that is more able to shield motorcyclists, who are so vulnerable on the road. Ultimately, we think better protective wear may prevent long-term diseases such as CTE.”

The team carried out their modelling by gathering data from real incidents. In the case of the American football players, the Imperial team used data that was originally collected by Biokinetics and Associates Ltd (Canada). The data was collected from NFL games that occurred from 1996 to 2001. A total of 182 collisions were recorded in the study. The Imperial team chose a collision that they thought was reconstructed well in the lab and input this data into their model.

The team reconstructed the second injury using medical records that detailed a patient’s fall to a marble floor, from ground level. They reconstructed the fall using a dummy and recorded the head accelerations during impact.

The accident involving a collision between a motorcyclist and a passenger car was reconstructed at the Transport Research Laboratory. Instruments were fitted inside a dummy head wearing a helmet, identical to the one worn in the accident, and the impacts were recorded. The location and velocity of the impact were adjusted to closely replicate the damage seen on the shell and lining of the helmet.

The information recorded from the sensors during each reconstruction was fed into a 3D model on a computer, created from MRI scans of a healthy 34-year-old male. The team’s software enabled them to pixelate the head into one million hexahedral elements and a quarter of a million quadrilateral elements, which represented 11 types of tissues including the scalp, skull, brain and anatomical features such as the sulci. This gave them the high fidelity capacity to focus in detail on parts most damaged from the initial impact of a TBI. They then compared their models with the MRI data and post-mortem studies of American footballers with CTE, which showed mechanical forces at the time of collision are concentrated in locations of tau deposition seen in the footballers’ brains with dementia.

Professor David Sharp, co-author from the Department of Medicine at Imperial College London, said: “We are very excited by the ability to link the early and late effects of head injuries. A large challenge is identifying patients at risk of dementia after head injury and our study provides a way to connect the critical events in this process. We will be working to understand how the way the brain deforms leads to brain degeneration, as this will be key to protecting against dementia.”

The study was funded by Imperial College Research Fellowship Scheme, the National Institute of Health Resarch (NIHR) and the Medical Research Council, and has been published in the journal Brain. Future work will explore the implications of this study for helmet design.

The researchers plan to use the computer model to optimise the design of sporting headgears, with focus on two mainstream sports, American Football and Horse Riding.

The team will also be working with researchers from the Royal British Legion Centre for Blast Studies at Imperial, exploring the effects of blasts on brain tissue.