The Second UK Robot Manipulation Workshop brought 40 expert teams together from across the nation to swap ideas and share inventions.

The workshop, hosted by Dr Ed Johns at the Dyson Robotics Lab, Imperial College London, brought some of the brightest brains in robotics together to share ideas and network on a range of topics in robot manipulation including mechanical design, sensor design, control, vision, response to touch, and learning.

It is highly encouraging for the UK’s competitiveness to discover just how many people across the country are working in robot manipulation, across all the important areas of this multi-disciplinary field.

Through invited talks, tutorials, poster sessions, and live demonstrations, guests learned how we can use vision and learning to control robotic behaviour, how biologically-inspired design of robotic hands can improve responsiveness to touch, and how in turn, robots can assist humans in disaster situations, and even in rehabilitation from paralysis.

Dr Johns, Dyson Research Fellow at Imperial’s Department of Computing, who organised the workshop, said: “Following the huge success of last year’s inaugural robot manipulation workshop, we are delighted to have hosted the second one so far and hope this becomes an annual event.” 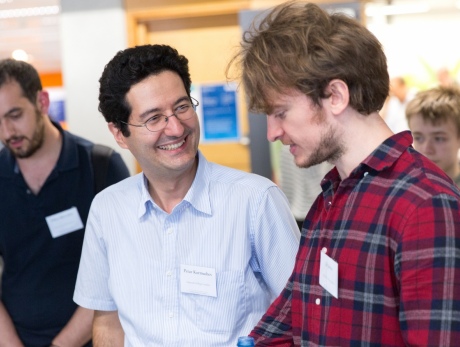 The two-day workshop attracted around 145 representatives from 40 UK universities, industry, and small startup companies, and was sponsored by Imperial's Dyson Robotics Lab, Ocado Technology, the Shadow Robot Company, and The Institution of Engineering and Technology.

Here are just a few of the activities over the two days: 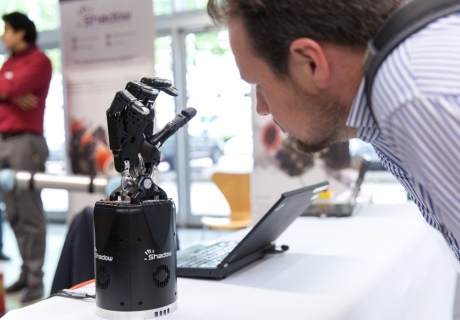 The Shadow Dexterous Hand waves to an admirer

The Shadow Robot Company specialises in designing robot hands, and is one of the longest running robotics company in the UK.

Using a total of 129 sensors, the Shadow Dexterous Hand, shown at the workshop, can detect its own positioning and amount of force used, and even has ultra-sensitive touch sensors on the fingertips, allowing it to respond to stimuli and mimic the human hand during movement. 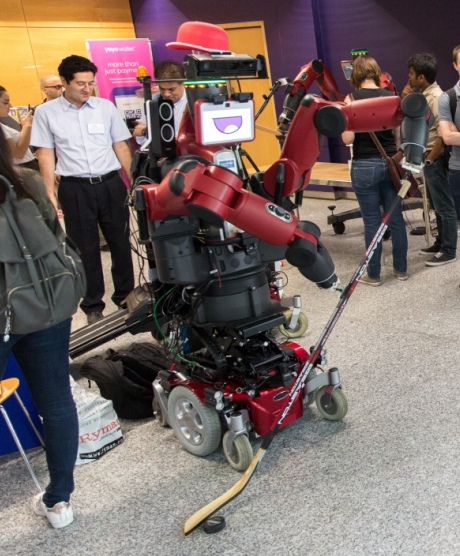 Robot DE NIRO from Imperial’s Robot Intelligence Lab, demonstrated its machine learning skills in teaching itself to hit a hockey puck towards a target.

Using a hockey stick with its two arms, the robot repeatedly attempted passing the puck along the floor towards the target, and it gradually learned, from trial and error, the correct force and direction required.

The Robot Intelligence Lab is led by Dr Petar Kormushev at the Dyson School of Design Engineering. 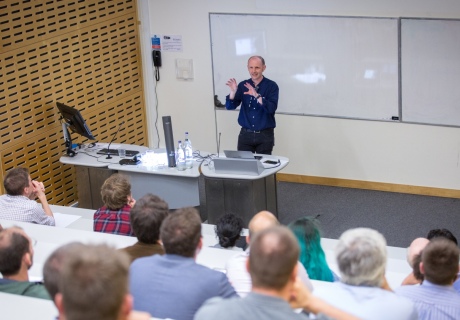 Andrew Davison, Professor of Robot Vision and Director of the Dyson Robotics Lab at Imperial, spoke about using a computer vision technique known as Simultaneous Localisation and Mapping (SLAM) in robotics. This deals with how a moving robot builds a map of its environment while using that same map to work out its own location, and the relative positions of objects it needs to interact with. 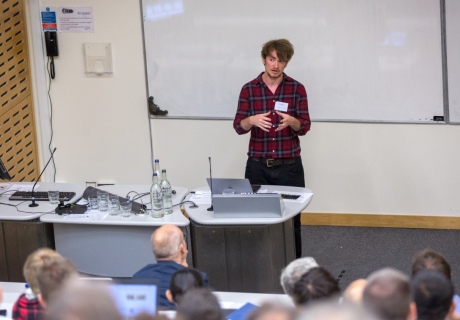 Dr Johns spoke to an expert audience about using deep learning to train simulated robot arms, and how to transfer the learned behaviour to a real world robot.

Dr Johns said: “It is highly encouraging for the UK’s competitiveness to discover just how many people across the country are working in robot manipulation, across all the important areas of this multi-disciplinary field. Sometimes it is necessary just to provide an accessible platform for a research community, and you can be pleasantly surprised at the enthusiastic response.”

Universities and companies in attendance: Return of the Robots: Imperial revs up for nationwide UK Robotics Week 2017 Robot DE NIRO at Imperial Festival Visitors can glimpse the future as the Robot Zone returns to the Festival Chancellor and James Dyson launch Imperial's design engineering school Dyson and Imperial to develop next generation robots at new centre