The future of additive manufacturing A new briefing paper, on the subject of 3D printing, was launched recently at Imperial's Invention Rooms.

The latest Institute for Molecular Science and Engineering (IMSE) briefing paper, produced in conjunction with Imperial’s Additive Manufacturing Network (AMN), outlines current challenges in the rapidly growing additive manufacturing – or ‘3D printing’ – industry, and how innovative research at Imperial is addressing these problems.

The hype around 3D printing replacing traditional manufacturing techniques is a bit of a misconception. 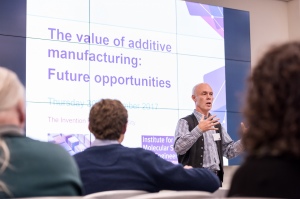 To kick off the launch event – held at the freshly opened Invention Rooms on Imperial’s new White City Campus – IMSE Associate Director, Professor Jason Riley introduced IMSE and its aims to the audience, including many guests from industry. The Institute’s briefing paper series is just one of its community-building activities that are built around three guiding pillars: advancing integrated transdisciplinary research, transforming education and enabling effective translation of research into practice.

By bringing together researchers from a range of backgrounds, and those not already working in the additive manufacturing space, we hope to stimulate radical ideas for future research.

The new paper arose after a co-creation workshop, held with the AMN and Professor Phill Dickens (University of Nottingham) at Imperial in May 2017. The idea of this multidisciplinary meeting was to “get some unusual suspects in a room and talking with each other”, explained Dr Billy Wu (co-leader of the AMN and Lecturer in the Dyson School of Design Engineering), during his overview of additive manufacturing activities at Imperial. 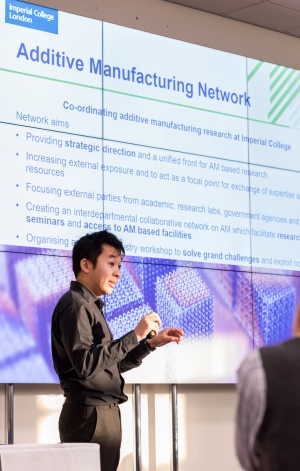 Encouraging multidisciplinary research is one of Imperial’s key strategic foundations, as the university strives to solve some of society’s greatest challenges. Indeed, both IMSE and the AMN were founded to support and bring together the College’s researchers – from a range of departments and faculties – to work on pressing problems in today’s world. 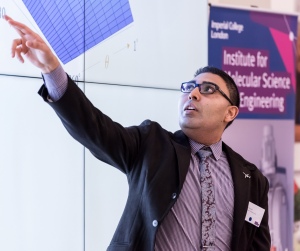 This multidisciplinary ethos is also exemplified by the breadth of research conducted by the event’s keynote speak, Dr Ajit Panesar (Department of Aeronautics).

Dr Panesar has been working in the 3D printing field for about six years, and previously conducted research on composite materials. With his focus on computer methods, he is now attempting to blend these two state-of-the-art fields and to exploit opportunities offered by innovative manufacturing techniques.

Computer methods in technology will continue to be increasingly important as society moves forward.

In his engaging and interactive talk – The role of computer methods in additive manufacturing: where we are and where we ought to be – Dr Panesar described the current state of the 3D printing industry as well as upcoming developments, and ended by speculating on the scope of so-far untapped potential in the sector.

It was fantastic to see the enthusiasm for 3D printing research, from such a diverse audience.

To end the event, guests enjoyed a food and drink reception while having the opportunity to learn more about additive-manufacturing-based research projects currently being conducted at Imperial. PhD students and research associates, from several departments had the opportunity to present research posters. For example, Dr Marin Sawa (Department of Chemical Engineering) showcased her work on a digitally printed paper-based biophotovoltaic device. 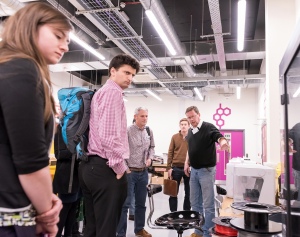 Guided tours of the Advanced Hackspace workshop and laboratory facilities in The Invention Rooms were also available to guests at the event. The Advanced Hackspace provides students and staff with access to a unique suite of prototyping technologies – including many 3D printers – on several of Imperial’s campuses, as well as other mentoring, financial and collaborative support for nascent research ideas.

IMSE’s programme of events will continue in the new year, with a Highlight Seminar on 11 January 2018. Professor Lee Cronin (University of Glasgow) will talk on Artificial-intelligence-driven synthesis and the digitisation of chemistry.

Upcoming IMSE briefing papers will focus on subjects such as carbon capture and utilization, as well as antimicrobial resistance. Please get in touch if you would like to suggest an important, relevant or timely topic that would benefit from the insight of Imperial academics.