Vlad-Daniel Stanciu is awarded a Cross bursary and will join the group as a UROP student in the summer.

Methyltrimethoxysilane (MTM) as a Reagent for Direct Amidation of Carboxylic Acids.

Sean's review on From Waste to Green Applications: The Use of Recovered Gold and Palladium in Catalysis is published in MDPI Molecules as part of the Special Issue on Recovery and Optical Application of Noble Metal Compounds. 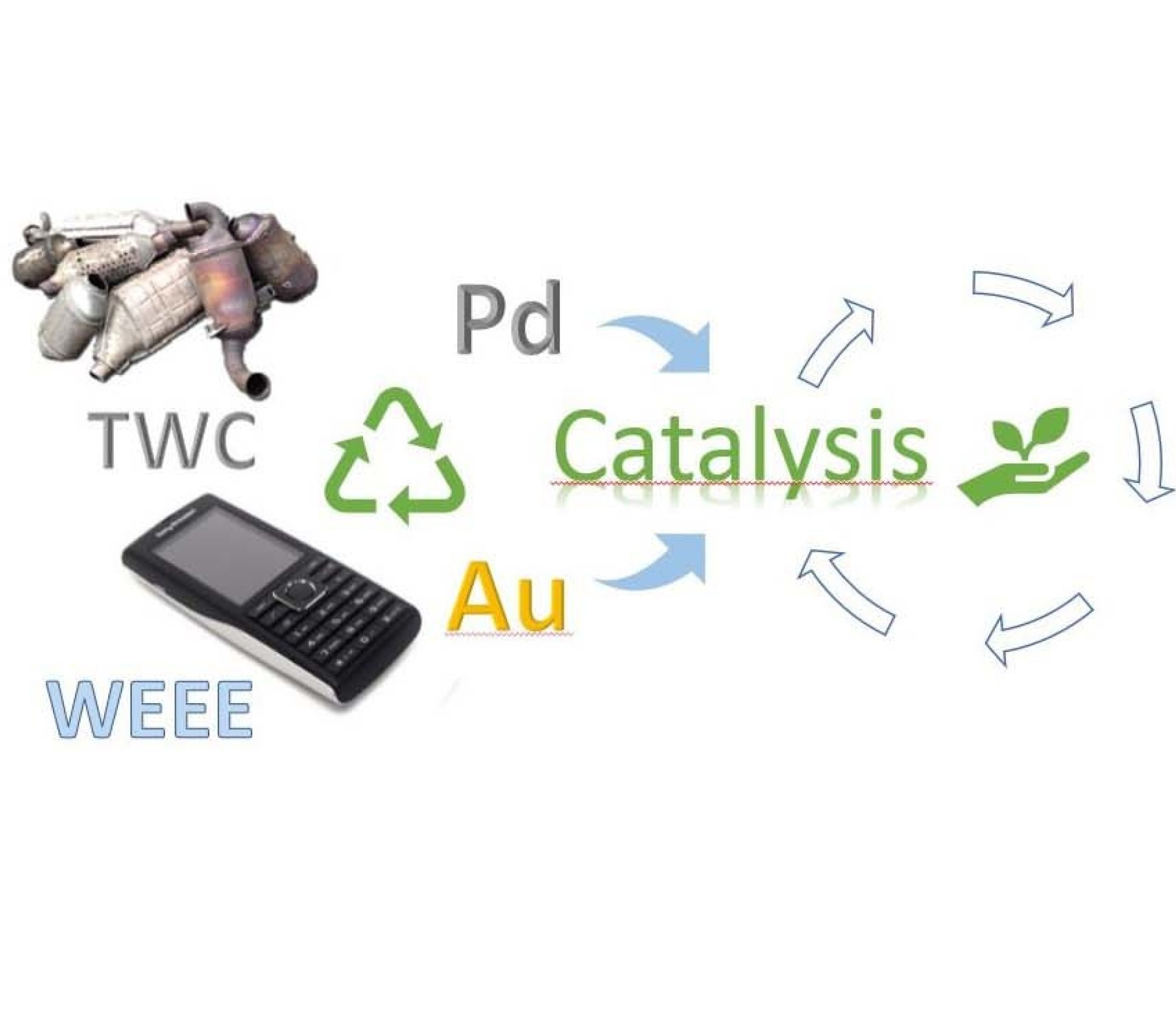 Chris Oliwa is awarded a RSC Undergraduate Research Bursary and will join the Lab over the summer.

Ben Lancaster joins the group on the React CDT to start his PhD as jointly supervised by Dr Chris Tighe (Chemical Engineering).

Josh Davies and Sean McCarthy start year 1 of their PhDs on the CDT React programme. Annie Rouse and Lindsey Li join the group for their MSci projects and Tamim Rahman joins the group for his BSc project. Welcome to all!

Karim finishes his PDRA stint and leaves to take up the role of Research Coordinator in Professor John Bower's group at Liverpool University. Good luck to Karim in his new position!

Relay Cross Metathesis for the Iterative Construction of Terpenoids and Synthesis of a Diterpene Benzoate Macrolide of Biogenetic Relevance to the Bromophycolides. 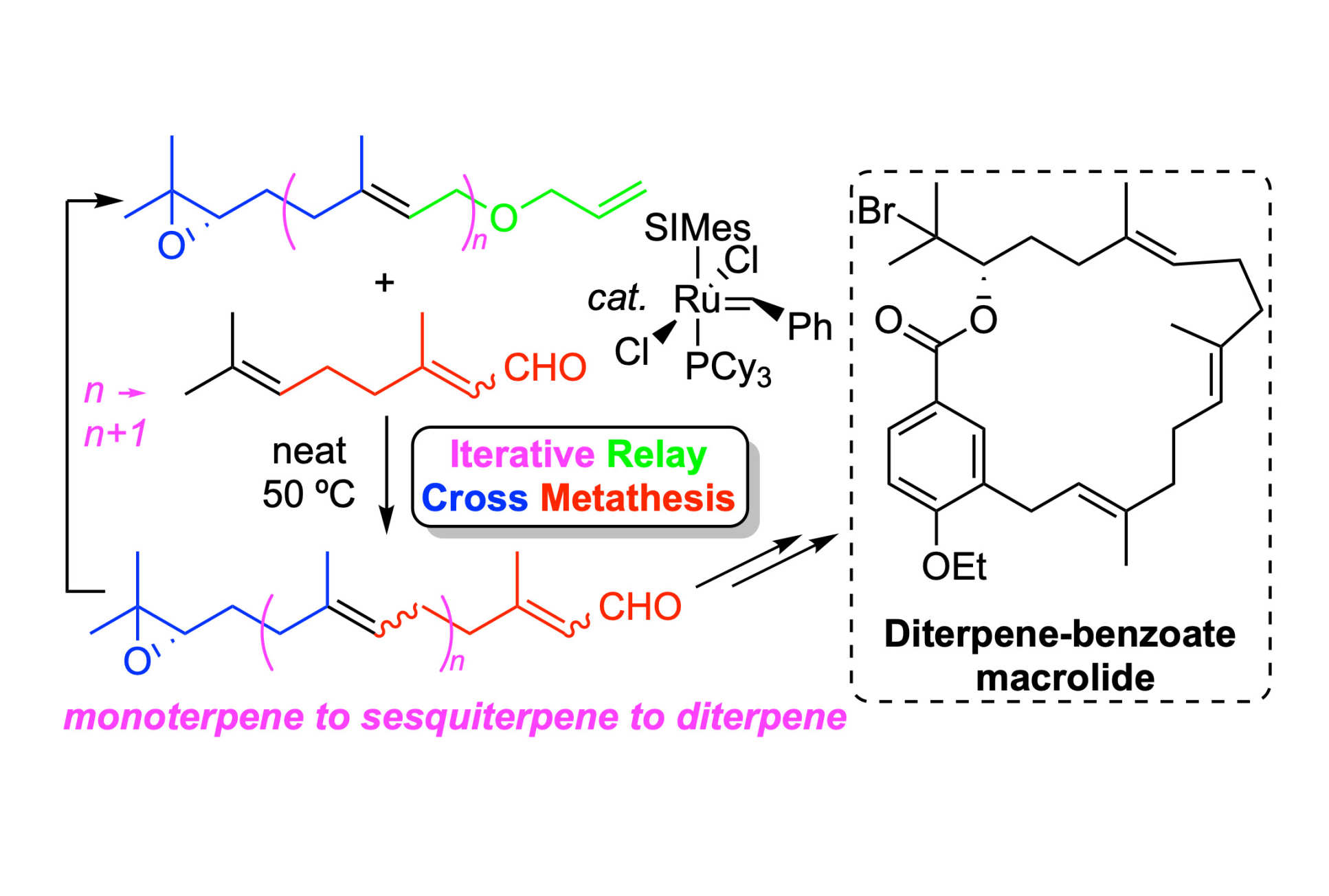 New paper accepted for publication in The Journal of Organic Chemistry: 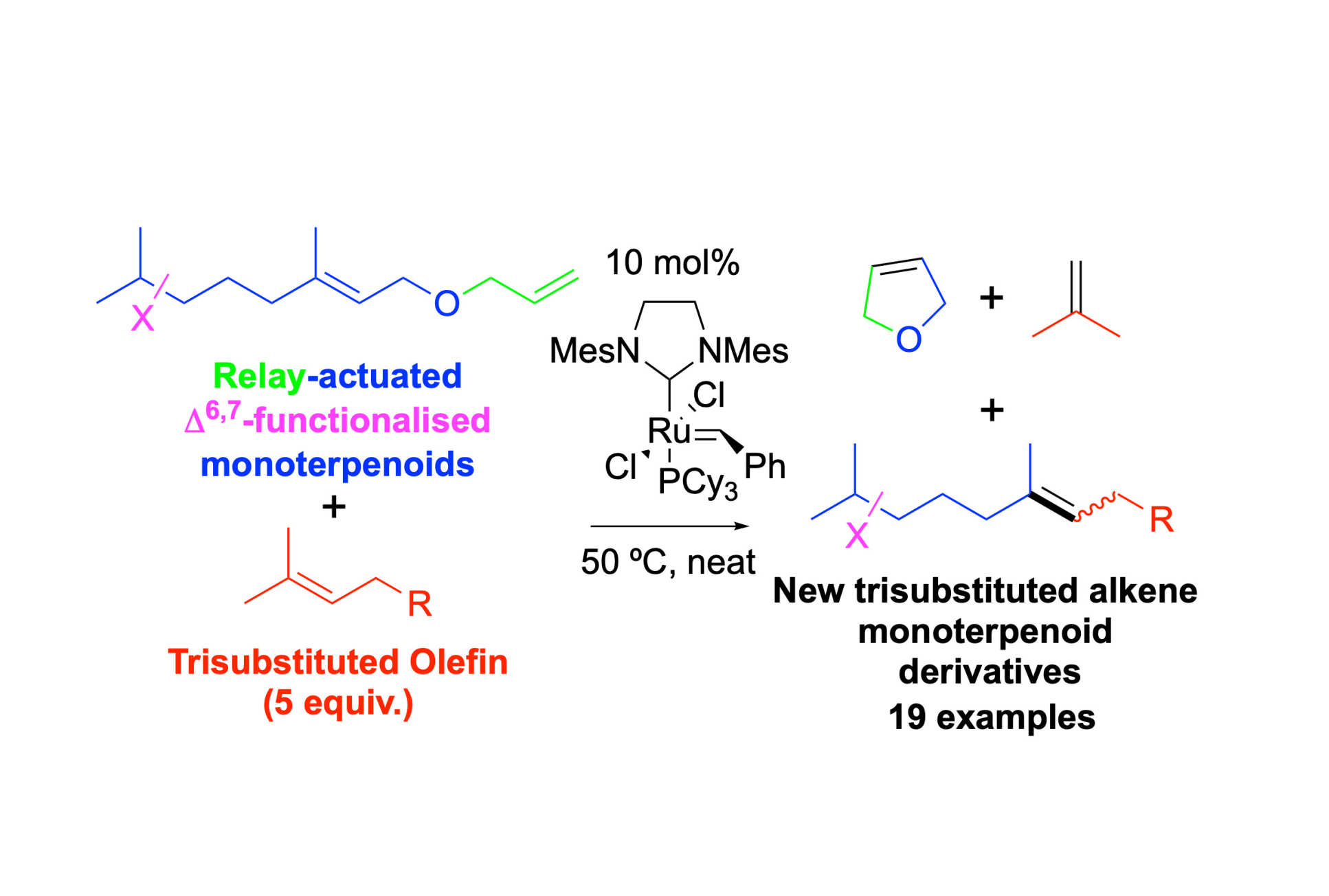 Ziye Yang rejoins the group to start his PhD. Welcome to Ziye!

Lei Zhang joins the group for her BSc project.

Karim presents his work in an oral presentation at The International Symposium on Olefin Metathesis and Related Chemistry (ISOM23), Barcelona, Spain.

A new manuscript detailing 'Relay Cross Metathesis for the Ascent of the Terpenoids' has been posted to the preprint server ChemRxiv. Twitter.

Rabia Qamar joins the group for her PhD studies. Welcome to Rabia!

Pupils from nearby Cardinal Vaughan Memorial School visit our labs @ MSRH (below) and then the Invention Rooms (6th March 2019):

Our 'Tetramethyl Orthosilicate (TMOS) as a Reagent for Direct Amidation of Carboxylic Acids' paper is listed as one of top five 'most read' in Organic Letters for 2018 in ACS axial.

Tianyou He returns to start his PhD. Welcome to Tianyou!

Shijia Zhu returns to start her PhD.  Welcome to Shijia!

Our new website to coincide with our move to the MSRH @ WC goes live!

Braddock Group Labs at the MSRH open for business.

The Braddock Group relocates to the MSRH @ White City.

Karim rejoins the group as an EPSRC supported PDRA to mastermind our move to White City. Welcome back Karim!

Mechanistic and Performance Studies on the Ligand-Promoted Ullmann Amination Reaction

Welcome to Jin! Jin Hui joins the group for a summer UROP project.

New member: Jin Hui Teh is awarded a College UROP Bursary and will join the group over the summer.

New member: Daniel O'Reilly is awarded a Chemistry Doctoral Scholarship (EPSRC DTP award) and will commence his PhD in October.

Albert Shi joins the group to start his PhD as supported by the CSC.

New Paper Accepted as a Featured Article in The Journal of Organic Chemistry:

Albert Shi is awarded CSC Scholarship and will join the group in October.

Yusrah Al-Gharebawi is awarded DTP funding and will join the group in October.

New Paper Accepted for Publication in Journal of Membrane Science:

Anna and Philipp join the group on the Chemical Biology MRes, Abi and Albert join on the Catalysis MRes, and Fuyi joins on the Drug Discovery MRes. Welcome to all!

Areeb and Iuliana join the group for their final year projects.

Mary Rose and Monica graduate from the DDD MRes programme.

Karim heads off to Melbourne, Australia for one year for his placement at CSIRO.

Chris is promoted to Professor of Organic Chemistry.

Michael Howlett is awarded an Imperial College EPSRC Vacation Bursary and will join the group in July for a UROP placement.

New Paper Accepted for Publication in Chemistry - A European Journal:

Jonathan Kwan joins the group on Green MRes programme. Mònica Planchat and Mary-Rose Ropner join the group on the DDD MRes. Welcome to all!

Chris is admitted to Fellow FRSC (Fellow of the Royal Society of Chemistry).

Daniel Kirkwood is awarded a Royal College of Science Union UROP Award and will join the group for the summer.

Chris is awarded an Imperial College President's Award for Excellence in Pastoral Care 2014.

Alison Keating graduates with distinction on the DDD MRes programme, finishing top of the class and receiving the 'Best DDD MRes Student Prize 2013'. 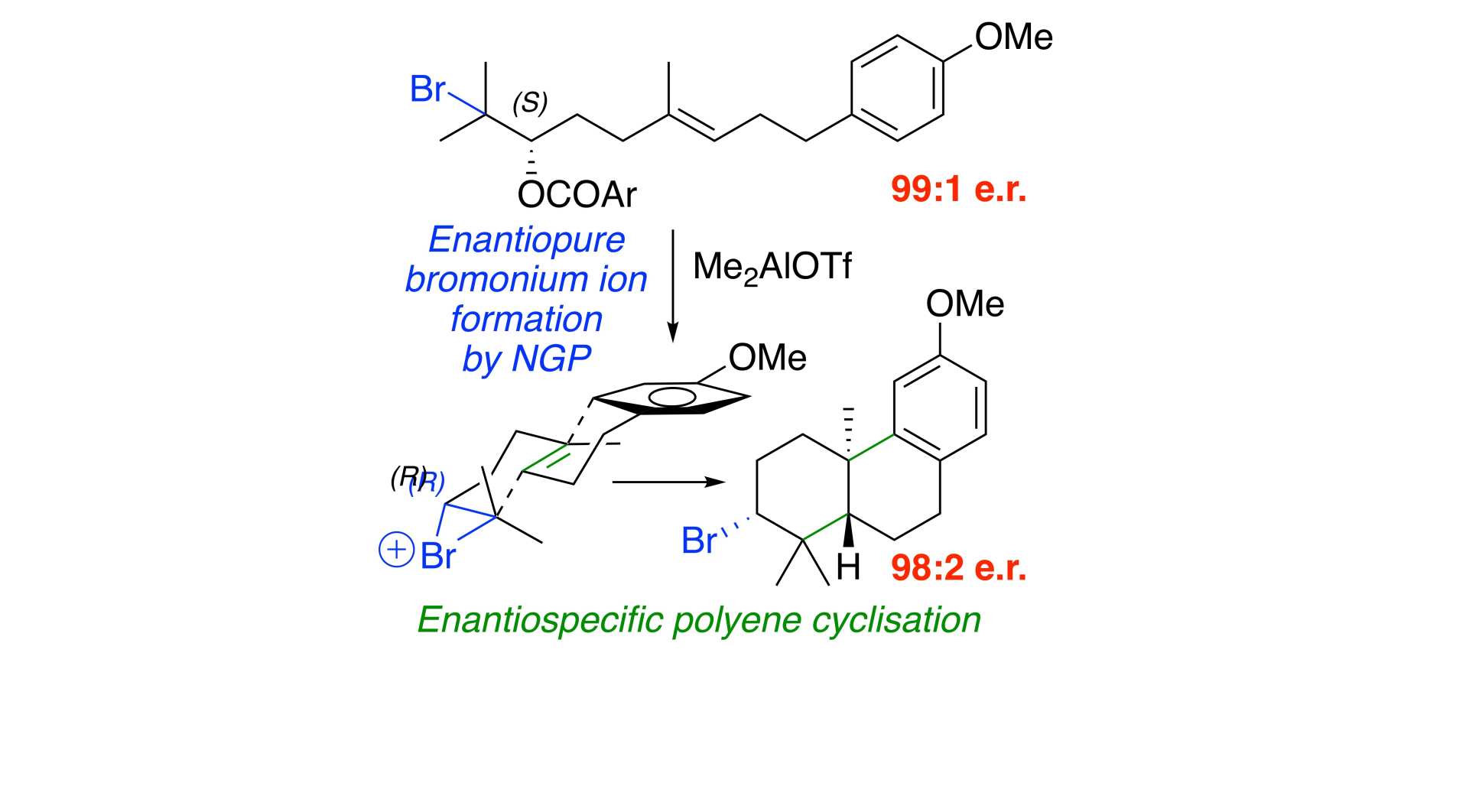 Anna is awarded her PhD. Congratulations to Dr Monta!

Joel Lee joins the group for his BSc project.

Alison Keating joins the group on the DDD MRes.

James Clarke is awarded the Alfred Bader Prize for Excellence in Organic Chemistry Research (for his final year project).

New Paper Accepted for Publication in The Journal of Organic Chemistry:

Daniel Perks wins best talk prize for his presentation at the 2012 Imperial College London Institute of Chemical Biology MRes Conference, and graduates from the DDD MRes with distinction.

Jared Marklew is selected to give presentation at SCI Postgraduate Symposium.

James Clarke is awarded EPSRC DTG studentship and will start his PhD October 2012.

New Paper Accepted for Publication in Journal Of Natural Products:

Betty Tai joins to do her final year BSc project in the Braddock group.

Ed Moore joins to do his final year MSci project in the Braddock Group.

Alex Jones starts his PhD as sponsored by EPSRC and GSK, Tim Barrett continues in the group to do his final year MSci project, and Sandy Leung joins to do her final year BSc project in the Braddock Group.

Daniel Byrom joins the group as a Masters student.

Jared Marklew starts his PhD as sponsored by EPSRC and Arrow Theraupeutics.

Dr Rebecca Pouwer finishes her PDRA stint at Imperial, and leaves to take up a PDRA position with Dr David Chen in Singapore (Jan 2010).

Rebecca and Thaïs present posters at the tenth Tetrahedron Symposium in Paris.

Savade Solanki awarded PhD for his thesis entitled "Towards the Biosynthetically-Inspired Total Synthesis of the Obtusallenes" and leaves to take up a post at the Institute of Cancer Research (ICR).

New Publication in the Journal of Organic Chemistry (Featured Article):

Savade Solanki won a prize for his talk entitled "Towards a Biosynthetically-Inspired Synthesis of the Obtusallene Family of Marine Natural Products". Rebecca Pouwer also won a prize for her poster entitled "The Generation and Trapping of Enantiopure Bromonium Ions".

Savade Solanki selected to give the PhD talk presentation at the RSC South-East Regional Meeting to be held at UCL on 17th December 2008.

Karl Bonney joins the group to start his PhD and Serkan Osman joins to do his final year MSci project in the Braddock Group.

Chris is promoted to Reader in Organic Chemistry.

New Publication in the Journal of Natural Products:

Joanna Redmond awarded PhD for her thesis entitled "Development of a Catalytic Asymmetric Bromination Reaction of Alkenes" and leaves to take up a post at GSK Stevenage, UK.