A tribute to Professor Danny Segal

On 16th March 2016 we celebrated the life of our colleague Danny Segal. Videos of the talks and musical performances can be found here.

It is with enormous sadness that we announce the death of our colleague Danny Segal, who was a truly exceptional person with a boundless enthusiasm for life, a passion for physics and a genuine empathy for others.

After completing a BSc in physics at the University of Manchester in 1983, Danny moved to the Physics Department at Imperial College, where he worked for his doctorate under Keith Burnett in the Spectroscopy Group (later to be absorbed into the Quantum Optics and Laser Science Group (QOLS)). His research involved the use of laser spectroscopic techniques to study the physics of atomic collisions: Danny had to establish a new laboratory virtually from scratch to complete his work and in doing so proved a most talented experimental physicist. It was soon clear to those who worked with him at the time what an admirable, sociable and good humoured colleague he was.

After Danny was awarded his PhD in 1988, Keith Burnett moved to Oxford, taking Danny with him as a post-doctoral research associate. In 1991, he returned to Imperial to join the ion-trapping activity under Richard Thompson. In 1993, Danny was awarded an EPSRC Advanced Fellowship for work using trapped ions in studies of cavity quantum electrodynamics. When the Fellowship ended, he was appointed to a Lectureship, and was subsequently promoted to Senior Lecturer in 2001, Reader in 2004, and Professor in 2011.

Danny’s research was mainly concerned with quantum optics experiments using laser-cooled ions in traps (particularly Penning traps), but his research interests also included electromagnetically-induced transparency and buffer-gas cooling of molecules. Danny was instrumental in the development of various novel Penning trap architectures, and in studies of the dynamics of trapped ions, culminating in the achievement of sideband cooling of a calcium ion in a Penning trap to the ground state of its motion. 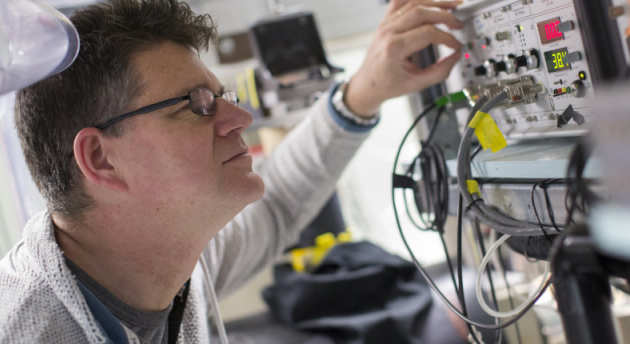 Danny was passionate about his research and particularly enjoyed the challenge of undertaking technically difficult experiments. Over the years, his many research students have benefitted from his boundless enthusiasm and physical insight. As a supervisor, he was always able to find time to give his students all the support they needed, both for technical matters and also personal issues.

Danny gave generously of his time to supporting the smooth running of both the QOLS group and the physics department in general. As a teacher, he was the envy of many colleagues, because he had an ability to inspire students in an apparently effortless manner and to convey complex ideas with skill and humour. He was instrumental in the formation of the Centre for Doctoral Training in Controlled Quantum Dynamics, and the success of this venture is to a large extent due to the excellent MRes programme for which he was mainly responsible.

He was the first Warden of the Clayponds Hall of Residence for postgraduate students at Imperial College, and he succeeded in establishing an effective and supportive community for the students based there. For many years he was the postgraduate mentor for the QOLS group, offering confidential advice to students with a wide range of problems. Recently he served as the department’s Senior Tutor, a demanding role to which he was totally committed. He was hugely appreciated in this position by the entire student body, and had a reputation for understanding and compassion, while at the same time remaining completely professional in his dealings with students.

Outside the College he had a reputation for giving his time freely to encourage scientific collaboration and cooperation. Danny did more than his fair share of EU network administration from which many EU research groups working in laser cooling and quantum optics benefitted. At the ion trap Winter School at Les Houches in 2012, when one of the other lecturers was ill, it was Danny who took over at the last minute as a replacement and, as with his other activities, this was carried out with his characteristic professionalism.

Danny was diagnosed with a serious brain tumour in September 2014. There followed a long period of intensive treatment, which was ultimately unsuccessful. The positive and determined attitude he took to his illness has been a true inspiration to those who were able to see him over the last year: he retained his unique character throughout, and it was always a pleasure to chat to him. He continued to be actively involved in the ion trap group’s research programme until very recently. He also maintained his lifelong interest in playing the guitar and painting.

Danny will be greatly missed by all those who came into contact with him. He is survived by his wife, Helen, and two grown-up children, Rose and Jack.

Read more about him: