What's it like to be a woman in science at Imperial's Faculty of Medicine? Imperial scientists reflect on gender equality in the scientific community, challenging stereotypes and female scientists who have inspired them.

On 11 February, the world will mark the International Day of Women and Girls in Science. Organised by the United Nations, this day recognises the issue that women and girls still encounter inequality in STEM (science, technology, engineering, maths and medicine) fields.

Whilst work has already been done to increase the numbers of women working in the field, as well as retaining and promoting women to senior positions, further improvements need to be made.

Gender inequality in STEM is a global challenge that Imperial is committed to playing a part in tackling. Here at the Faculty of Medicine, all of our Department hold an Athena SWAN award, which recognises and celebrates equality in STEM.

To mark International Day of Women and Girls in Science, we spoke to 11 of our scientists across the Faculty to explore their broad range of experience of what it is like to be a woman in science and which female scientists have inspired them.

What is the biggest challenge you’ve faced as a woman in science?

Returning to work after maternity leave – particularly the second time round.

Lack of time and testosterone! I have no desire to be at the top if this involves fighting my way there. Since I’ve had my three children I have to cram everything into the 9-to-5 working day, so going to talks, seminars, conferences, and indulging myself with work is very difficult. However, my frustration of not progressing as fast as men is not stronger than the sense of achievement and satisfaction my family provide.

Trying to ensure any promotion or praise I get are for the quality of my work and not because I’m the ‘token woman’. I want to be judged on the same academic merit as everyone else and feel I earn recognition because I deserve it. Saying that, I know I have lost out on opportunities because ‘my face doesn’t fit’, i.e. I’m not white, male and over 45.

I do not feel that my gender as a woman or my ethnic identity as a British Pakistani Muslim has in any way prevented me from achieving my career ambitions as a neuroscientist or negatively biased my involvement in science. Most of the scientists I have worked with, including principal investigators, postdocs and PhD students, are a professionally diverse group of people from all around the world. I believe we should celebrate this important aspect of collaborative science culture. If anything, the challenges that I have faced in scientific research have primarily pertained to the nature and pressures of scientific study itself.

What's the greatest challenge to achieving equality in science?

I think in order to achieve equality and maintain it, people need to have deeper discussions about why some employers in some sectors do not employ as many women. For example, I’ve noticed some similar points being made, namely that they do not understand how equality and meritocracy/competition fit in, especially in such a fierce and competitive work environment. I think one rebuttal for this is that people’s need to understand equality does not stand for favouring one group over another, and that people with roles are there because they deserve it.

I think the greatest challenge is the lack of a predictable and transparent career structure, which I think tends to disadvantage women more than men.

If you could change one thing about the field in which you work, what would it be?

I think it’s incredibly important to raise aspirations of young women and girls, and instil in them the belief that there are no limits to their potential for achievement. Outside of the lab, I volunteer as a Brownie leader, and I see that gender and scientific stereotypes are alive and well in our society. This needs to be tackled in early years education if women are to achieve complete equality with their male counterparts.

We need to work on making the general public more aware of the important ground-breaking contributions that women make in science to get more schools, families and environments that help support and nurture aspiring girls and young women in science. It’s necessary to challenge society’s stereotypes of what a scientist is, what we do and what we look like within public engagement and the media. This will not only allow a more realistic representation of the diversity of those in STEM careers but will also likely inspire more girls to take up STEM subjects and enter scientific research careers.

The depiction of scientists in the media – they are often portrayed as old and male – maybe mad – my lab doesn't look like that! No wonder girls start thinking that science is a subject for boys.

A better recognition of collaborative working rather than obsessing about one’s authorship position.

What is your proudest achievement?

To have managed to continue securing research grants, make a comeback in the clinic while being present for my three children, in a foreign country and a foreign language, and still be married!

Helping develop careers of young scientists and seeing my daughter growing up to be independent, determined and considerate of others.

Discovering a novel previously unknown population of dopamine neurons in the midbrain and identifying their connectivity to another region of the brain has certainly been a milestone for me in my research career so far. I went on to demonstrate that a pair of proteins are critical for the survival of this subset of dopamine neurons within the brain, and could underlie important behaviours such as stress response, anxiety or drug addiction. Going on to publish these findings during my PhD and presenting this work at international conferences, while establishing lasting networks and collaborations as a result were rewarding experiences.

One of my proudest moments came when I was asked to present my work at the annual meeting of the Prostate Cancer Foundation of the United States, by whom I was subsequently granted a Young Investigator Award. I also take pride in the opportunities to teach and mentor the incredible young scientists in our research team. Watching them progress and make discoveries of their own is incredibly rewarding! I'm also very proud of the chance to change people's perceptions about women in science, which I try to do wherever I can!

My relationships with my peers and what we have achieved together for children’s health.

Who do you think are the most inspirational women in science?

Without people like Professor Dame Sally Davies, Chief Medical Officer, I wouldn’t be in the position I am today.

Rosalind Franklin – without her clever, careful (and for a long time unacknowledged) work the discovery of DNA may have been very different.

The ones who quietly go about their work in the same manner as inspirational men. For example, community teams in the NHS and other parts of the world who care for others.

Angelina Fanny Hesse is the un-credited, under-appreciated inventor of a crucial tool that allowed the isolation and discovery of Mycobacterium tuberculosis, and is still used every day in research and diagnostics labs: the agar plate. Whilst working as an unpaid lab technician under Robert Koch, she made the essential discovery of using agar-agar in lieu of gelatine, which was proving to be relatively useless as a means of isolating major pathogens. Koch received the Nobel prize in Physiology or Medicine in 1905 for the discovery of Mycobacterium tuberculosis, but barely mentioned agar in his paper of 1882 and never credited Angelina. 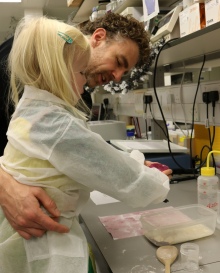 I work with many inspirational established and trainee scientists who are women, but one true scientist who particularly inspires me is my 5-year-old daughter. She is insatiably curious, eager to understand the world around her, always forming hypotheses and testing them, and - crucially - with no concern that her age, sex or ethnicity should limit her aspirations. Her only reason for not taking on a challenge is that that there is something else more interesting or important to do first (current career priorities shift between scientist, pilot, pirate and tooth-fairy!). My ambition is that this should never change. For years women have been amongst those told, explicitly or implicitly, that they have less to contribute to Science than a privileged minority.  This is bad for men, women, and Science.