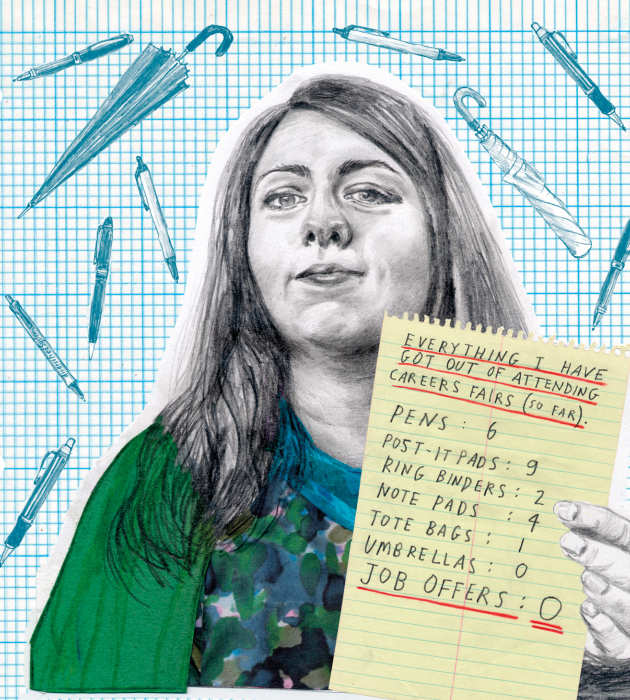 Journeying from College to career is no easy ride, says Kelly Oakes

As rain hammers on the roof of the crowded careers fair marquee on the Queen’s Lawn, a pen from a prospective employer promises to do little to shelter me from the down­pour. But should it give me hope for when I leave Imperial? If they’re handing out free pens, might that mean they have jobs to give out too?

"I’m afraid we don’t have any umbrellas left, would you like a free pen instead?"

At the end of my undergraduate studies, the Rector told us in the Royal Albert Hall that our newly conferred Imperial degrees would open many doors for us. Despite impressive statistics – 89 per cent of Imperial graduates find graduate-level jobs six months after completing their studies – my classmates and I are finding those doors rather stiff.

Faced with a stormy jobs market, and no umbrella to protect me from the worst of it, I opted to shelter inside academia for one more year while studying for a Master’s degree. I’m gaining skills that I hope will help me into a job when I leave Imperial.

At a recent Royal College of Science Union dinner, I spoke to an alumnus who graduated a generation before me. In her final year she received not one, or even two, but three job offers. In similar tales, alumni described the ‘milk round’, when companies would visit campus and encourage students to sign up to interviews for any positions that interested them.

Current students talk about the old-style ‘milk round’ as if it were a myth or legend. Though it still exists, these days it is the employers who have their pick of the students, not the other way around.

Today, most students frequenting Imperial’s careers fairs will say they’re ‘networking’ with the people manning the stalls. The marquee is awash with students who would claim that it’s just a coincidence that they happen to be wearing a suit and carrying a stack of freshly printed CVs on the day of a fair. You will often see these same people trying to strike up a casual conversation with a potential employer which, in reality, looks anything but casual. Alongside seasoned careers fair patrons are the more sceptical punters, unconvinced that the event supports their cause, who are using it to gather enough free stationery to see them through revision instead.

Regardless of the approach taken at a careers fair, getting an interview is a mara­thon affair. Meeting the challenge requires hours of online assessments, application form filling and CV tweaking, not forget­ting all those extra curricular activities you should be doing too. A degree is no longer enough.

Interview days can provide some light relief, especially if they involve The Apprentice-style tasks, as many now do. They are nonetheless hard work. Employ­ers want perfection – in a whole day spent analysing case studies, working in small groups and enduring one-to-one interviews, just one slip-up and you’ve blown it.

In our final year, instead of rumours of job offers spreading through lecture theatres, those who had received good news made announcements on Facebook. Congratula­tions were offered in the same way, giving others yet to taste success a computer screen behind which they could hide their jealousy.

Those who went on from Imperial straight into jobs or PhD study were the ones who had numerous internships under their belt, or had spent sweltering summers working in the lab.

As for the rest of us, some rays of sunshine are beginning to peek through the clouds. Some of my classmates are back with their parents for now, but as the interviews trickle in they are inching closer to their first, proper job.

Those of us who chose to stay in academia just a little longer will have to leave its warm embrace eventually. Though it didn’t protect me from the rain, that free pen will come in handy when I start filling in job applications of my own.

Kelly Oakes (MSci Physics 2011) is studying for a Master’s in Science Communication. She edits the science pages of Felix, the Imperial student newspaper, and blogs for Scientific American.