In the battle against ‘superbugs’, public awareness is as critical as cutting-edge research. The 2015 Imperial Festival provided an opportunity for Imperial researchers working on antimicrobial resistance to spark a conversation far beyond the borders of the South Kensington Campus. Dr Marianne Guenot explains more.

It’s minutes before we open the doors of the Superbug Zone at the Imperial Festival. The room is buzzing with anticipa­tion. I am one of 200 Imperial scientists who have helped design a series of interactive exhib­its to encourage debate about our research. 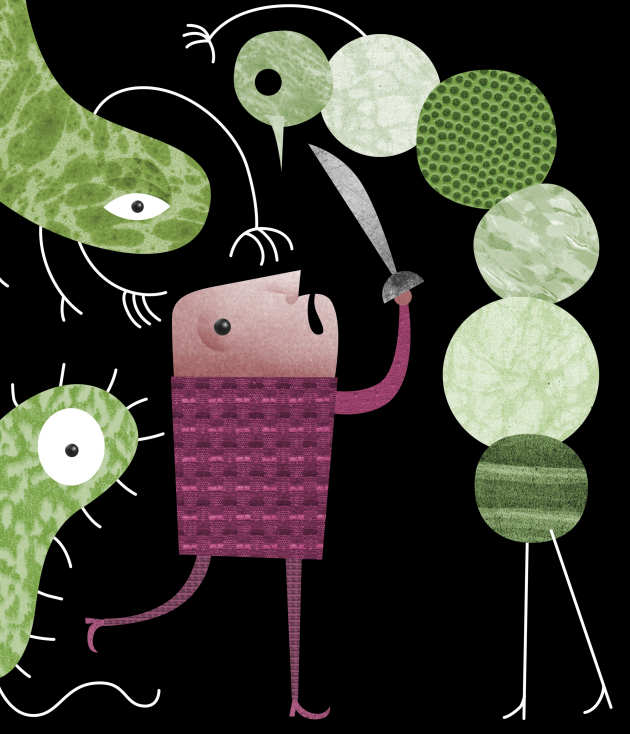 On a normal day, I’d be working away in the lab. But I spend today frantically tweeting, favouriting and hashtagging conversations taking place in the Zone, in order to encourage further debate on social media. A soft ping attracts my attention to the first tweet of the day, from Haringey Sixth Form Centre. It’s a simple question, but it reflects hours of work from my colleagues. I am thrilled by these 120 characters

"Do superbugs and bacteria smell? If yes, why do they smell? Haringey Sixth Form @Haringey6thform"

Let’s go back a couple of months. My colleague Dr Joana Moscoso, an Imperial microbiologist, called together PhD and postdoctoral scientists from the MRC Centre for Molecular Bacteriology and Infection (CMBI). Joana is deeply committed to engaging lay audiences with science, and she had the idea of organising an event that pulled together research into antimicrobial resistance (AMR) from across the College for the upcoming Imperial Festival. Over the next few months, we worked with Imperial Festival staff and researchers from medicine, life sciences, public health, engineering and environmental sciences, to design ways to spark conversations about this major threat to public health. Because communication is the best weapon we’ve got.

Antimicrobial-resistant microorganisms, commonly known as superbugs, are microbes that have become less susceptible to the drugs we use to block them. Bacteria that can resist antibiotics are becoming increasingly common, and threaten to jeopardise our entire health system – a phenomenon described as a “ticking time bomb” by the UK’s Chief Medical Officer, Professor Dame Sally Davies.

In the past few years, AMR has featured heavily in the media, and governments have started to recognise how dangerous it can be. They are now implementing new tactical strategies and actively redirecting resources to win the war on superbugs. Of course, a considerable effort is being put towards encouraging research.

For example, in June 2015, Imperial launched the Antimicrobial Research Collaborative – an innovative, multidisciplinary approach to consolidating Imperial’s research in this area. The initiative adopts a ‘one-health’ approach, focusing on healthcare collaboration and communication across the College, and with Imperial College Healthcare NHS Trust and other academic, industrial and healthcare partners. It aims not only to develop new antibiotics and identify novel targets, but also to consider how society can better use antibiotics, prevent infection and minimise transmission and emergence of resistance.

This approach reflects a big part of government and health agency plans – simply to talk about AMR. Raising awareness of the issue through public engagement is a key point in the published action strategies from the UK and the World Health Organization. This is because making people aware and generating conversation around the issue will help us combat it.

Antibiotics were discovered in 1928 by Sir Alexan­der Fleming at Imperial’s St Mary’s Campus. Since then, they have become seen as a miracle drug – a cure for every infectious disease – even though they do not work on viral, parasitic or fungal infections. Even today, patients request antibiotics for many ailments, and will go as far as faking symptoms or refusing to leave the doctor’s office until they are prescribed. This has led to an estimated 10 million inappropriate prescriptions a year in the UK alone, impos­ing unnecessary evolutionary pressure on bacteria, which respond by becoming resistant.

Much of this stems from a basic misunderstanding of AMR. A recent Wellcome Trust study showed that while people are aware of AMR, they do not understand it or do not see it as a personal threat. Instead, they put it down to media scaremongering. “These misinterpretations about antibiotics are because people don’t understand the basics,” says Joana. “It’s not their fault. Even scientists didn’t understand them 20 years ago.”

“We designed the Superbug Zone as a journey into microbiology, to give people the tools they need to understand different aspects of this complicated issue,” says Joana. “We provided a strong focus on antibiotic resistance, but we also went beyond that. We compared bacteria and fungi. And we explained what bacteria are, where they live, how they live, how they become resistant, if they are good or bad and so on.”

Fifteen interactive research stands led visitors through a narrative, starting with the basic biology of antimicrobial resistant microorganisms, followed by an opportunity to see Fleming’s microscope and meet the curator of the Sir Alexander Fleming Museum, and then talk with researchers and clinicians about their research. For example, Dr Luke Moore talked about how he has developed a phone app to help doctors prescribe antimicrobials more efficiently.

The Superbug Zone also provided an opportunity for people to challenge their sometimes stereotyped image of scientists. Several visitors confessed that the researchers they met looked very different from the clichéd image of the lab-coat wearing, bespectacled, timorous nerd. Instead, they talked about meeting communicative, friendly scientists, keen to present their work, and open about discussing controversial issues, such as DNA manipulation and animal research.

"Got a question? Tweet a scientist! superbug zone @cmbi_cpa #superbugzone"

Events like these create direct lines of communica­tionbetween public audiences and researchers. The transition of the internet from one-way information provider to a platform for user-generated content also provides researchers with a way to propagate their science and to go where the audiences are. Not everyone lives in a university city, but they still deserve access to this kind of engagement, so social media is a great way to interact with them. 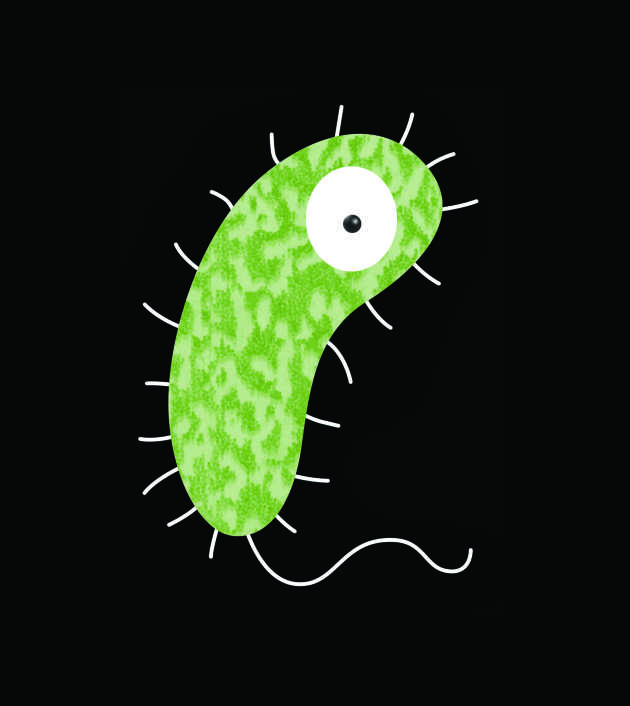 Microbiologist Dr Ronan McCarthy has been using Twitter for some time to reach broader audiences: “Twitter is a fantastic resource, which enables communication between fellow scientists and the general public on a truly international level,” he says. Ronan and I decided to use social media to publicise the Superbug Zone, and to use this project to learn about social media campaigning.

During the month before the Festival, we constructed a Twitter presence for the CMBI Postdoctoral Association, which we used to promote the Superbug Zone. With our new-found experience, we then organised departmental workshops to train other scientists. “The workshops generated a lot of interest in social media,” Ronan explains.

By posting science facts, teaser pictures and scientist profiles, we engaged with those who were curious about science, and got a brilliant response to our efforts. “The lasting outcomes include establishing a Twitter page for the CMBI Postdoctoral Association which now has almost 200 followers and is a fantastic tool to promote research done in the CMBI,” attests Ronan.

The Superbug Zone social media campaign has subsequently inspired us to kick off conversations on other topics. For example, we recently launched a #tweetapaper campaign, encouraging scientists to tweet the latest academic paper in everyday language. We are hoping to strengthen our Twitter platform so that it remains a source of information for the public in the future.

Putting on events like this takes a lot of time,so why do busy professional researchers volunteer to do it? “Universities have understood that they need to reach out and invest in outreach, and that engaging with wider audiences is part of a scientist’s job,” says Joana. “More and more funding bodies require scientists to engage with broad audiences through routes such as organising events, publishing podcasts and blogging. Doing outreach is another way of generating value and impact for the work we do.”

What the Superbug Zone made clearis that the public often ask questions that can prompt a new approach to research. It is often surprising how relevant these questions can be, reminiscent of the metaphor of not being able to see the wood for the trees. You spend so much time specialising in a, quite literally, microscopic subject, that it’s sometimes easy to lose sight of the bigger picture.

Public engagement also provides a way for researchers to challenge theories with real-world perspectives. For example, I had a fascinating discussion with an experienced lawyer about the science and politics of drug development in the UK – a conversation I would probably have never had otherwise. Each encounter has the potential to bring some perspective to my research project.

"A big thank you from the #superbugzone for a great weekend! See you next year! #microbiology #outreach superbug zone @cmbi_cpa"

Lastly, many of us do this work because, well frankly, it’s quite fun.By the end of the Festival, we were all hoarse and exhausted, but we all had big smiles on our faces. We knew that the time and effort we had put into organising this event had given us and our visitors plenty to think about, and that we all had better ideas of what we need to do to fight AMR.

DR MARIANNE GUENOT is a microbiologist who finished a postdoc at Imperial in August 2015. She enjoys communicating about research so much that after more than eight years as a scientist, she has left the pipettes behind to go back to school and take an MSc in Science Communication at Imperial.

"Congratulations to Dr Moscoso As we went to press we heard that Dr Joana Moscoso has been awarded a Royal Society of Biology’s Science Communication Award 2015. Judge Dr Steve Cross, Wellcome Trust Engage­ment Fellow, said: “We were so impressed by her work that she beat a pool of much more senior scientists. She’s clearly a great leader and is solving problems that she spotted, and taking science to an under-served audience.”"

Perhaps not surprisingly, the researchers who feature in this article are active on Twitter in a personal capacity, in addition to the CMBI Twitter handle @cmbi_cpa. Sign up to follow them via @Marianne_Guenot, @JoanaMoscoso and @McCarthy_Ronan.

The 2016 Imperial Festival takes place on 7 and 8 May. See highlights from the 2015 Festival, including from the Superbug Zone.