The dichotomy of modern physics

Our current understanding of the laws of the universe is known to be incomplete.  One one hand, modern physics has been remarkably successful at describing and explaining the phenomena we observe around us, from the behaviour of tiny atoms and molecules (and even their constituent parts) to the vast scales of galaxies and beyond.  On the other hand, it is clear that what we appear to understand so well is only a small fraction of what goes on in the natural world.  The most famous examples of this are dark energy, some unknown field driving the accelerating expansion of the universe, and dark matter, some unknown form of matter that interacts gravitationally but not electromagnetically.  The dichotomy of such a deep understanding in one sector, and such ignorance in others, makes for an exciting and intriguing frontier of physics research.  Here, the right experiment may shed light on unknown physics and help us begin to unravel what lies beyond our current level of understanding.

One of the most intriguing mysteries of our current understanding of particles and how they interact, summarized by the Standard Model of particle physics, is how the constituent parts of the observed universe can exist at all.  The prediction of known physics is that the origin of the universe, the big bang, should have created matter and anti-matter in very nearly equal amounts.  When these come together, they annihilate to generate pure energy, so the universe should have evolved into one made almost entirely of light.  Thankfully (!), this is not at all what we observe today, where the observable universe is made predominantly of matter and anti-matter is exceedingly rare.  What caused this imbalance, where more matter was created than anti-matter, is a modern mystery.  While we don't yet understand what caused the imbalance, we do known about the necessary ingredients.  One of these ingredients is CP violation, where particle interactions appear different under the combined symmetries of charge conjugation (exchanging particles for their anti-particles) and parity (inverting the spatial coordinates).  In most modern theories, CP violation is equivalent to time-reversal (T) violation, so in many ways one of the fundamental ingredients to produce a universe dominated by matter is that the laws of physics must appear different if the arrow of time is reversed.

Measuring the roundness of the electron 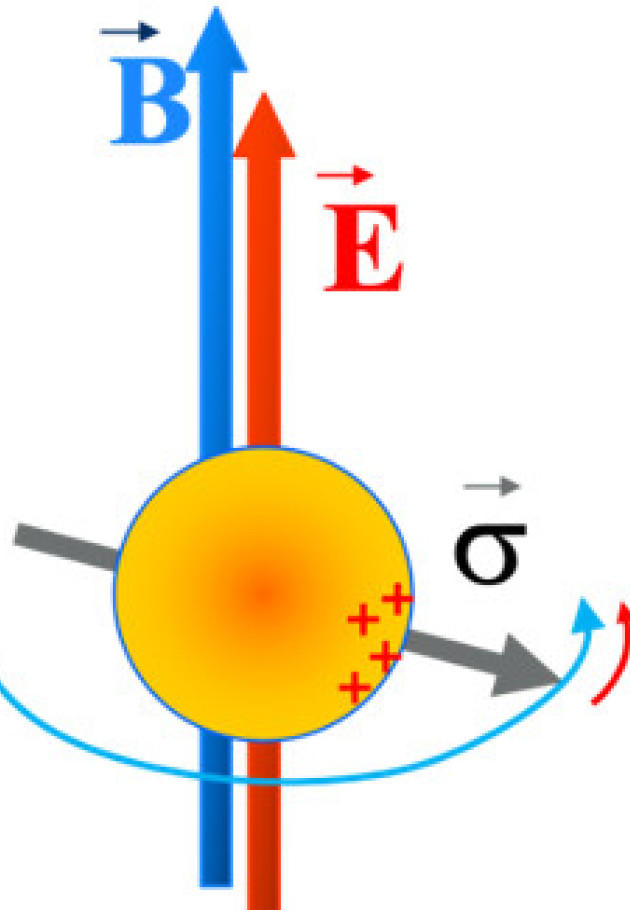 There are examples of CP (or T) violating physics in the Standard Model.  However, the amount of CP-violating physics in this model fails, by many orders of magnitude, to explain the observed matter/anti-matter imbalance.  Together with other unexplained phenomena, this has lead to the general consensus that the Standard Model is incomplete; new particles and physics are waiting to be discovered.  Theories that extend the Standard Model naturally include more CP violation.  One of the predictions of such theories is that the electron should have a measurable electric dipole moment (edm), i.e. the charge distribution of the electron is not perfectly spherical.  This is what we hope to measure.  This work is part of a growing class of experiments seeking to answer questions in fundamental physics by making precise measurements at very low energies.  Such an approach is in many ways complementary to more standard, and direct, methods of revealing new physics by colliding particles together at the highest achievable energies.  It is amazing that two approaches, which in practise could not be much different, can together investigate the same physics frontier.

To measure the electron's edm, we need to place an electron in combined parallel (or anti-parallel) magnetic and electric fields.  Just as a top precesses when in a gravitational field, so too does an electron's inherent magnetic dipole moment, i.e. its spin, precess about an applied magnetic field.  If the electron has an edm, the rate of this precession will change depending on whether the applied electric field is parallel or anti-parallel to the applied magnetic field.  In one orientation, the spin precession will speed up, in the other it will slow down.  The change in the precession rate is expected to be tiny, so we need to measure it as precisely as possible.

The experimental sensitivity to the edm is enhanced by placing the electron in a heavy polar molecule, in our case ytterbium monofluouride (YbF).  The heavy atom makes relativistic effects more prominent, which is needed for the new high-energy physics to reveal itself.  Using a polar molecule means that the molecule's internal electric field, which the electron experiences, can be about a million times larger than any electric field we could normally apply in the lab.  The precision of our measurement improves if we can measure the spin precession time for as long as possible, and use as many molecules in each measurement as possible.  We currently have a number of experiments, all using YbF molecules, that achieve these desired criteria to differing amounts.  Some of our experiments rely on the exciting realization that YbF molecules can be laser cooled to ultracold temperatures (less than one thousandths of a degree above absolute zero).  Each of our experiments is discussed in detail below. 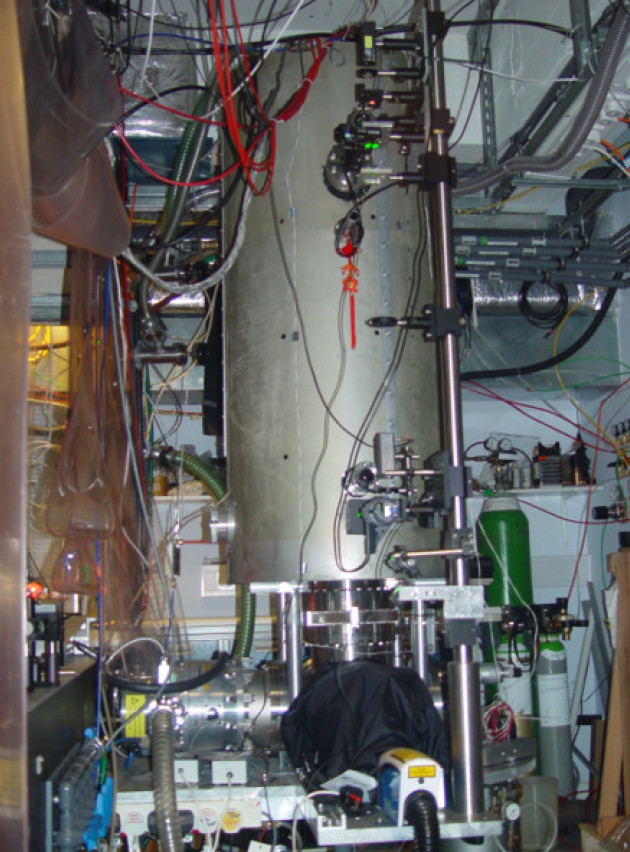 This experiment has been running for nearly two decades and was the first experiment to leverage the power of using heavy polar molecules to search for the electron electric dipole moment (eEDM).  It has previously taken data runs to search for the eEDM in 2002 and 2011.  After a number of upgrades over the past decade, it is poised to make one last attempt before being replaced by more sensitive experiments based on molecules that have been cooled to ultracold temperatures using laser-cooling techniques.

This experiment is based on a supersonic (i.e. fast) beam of YbF molecules, which have an internal temperature of around 4K.  Though cold by everyday standards, this relatively hot temperature, combined with the fast beam speed, limit the measurement time to about 1 millisecond.  With a beam speed of 600 m/s in the lab frame, the so-called "interaction region", where we require highly controlled electric and magnetic fields, is about a meter long.  In the figure, you can see a large vertically-oriented cylinder (in this experiment, the molecular beam propagates from the floor to the ceiling).  This is the outermost layer of a 3-layer mumetal magnetic shield that reduces ambient magnetic fields to the required level.  Nested inside are two more layers of shielding and the ultra-high vacuum chamber through which the molecules propagate.

One benefit of using a supersonic expansion is that the molecules are generated in short pulses or bursts and all of them have nearly the same speed.  This allows us to initially prepare the electron spin (and read it out) using radio-frequency pulses that address the entire pulse of molecules at once.  Unfortunately, the beam is too fast to facilitate straightforward laser cooling or slowing techniques.  However, we are able to make use of photon-cycling, the basis of laser-cooling techniques, to increase the efficiency of our molecule detectors and improve the associated edm measurement precision.  Fully realizing the benefits of laser cooling requires starting with a slower molecular beam, as is employed in our other (and newer!) "ultracold" edm experiments.

The basic idea behind the ultracold eEDM experiment is to carry out the measurement using a molecular beam of YbF molecules, much like is done for the 'supersonic eEDM' experiment, but to use molecules that are five orders of magnitude colder to carry out the measurement.  This will allow us to realize a much longer spin-precession time, and therefore a much more precise measurement of the electron edm.  It will also require control of the electric and magnetic fields at a much higher level, as well as developing new all-optical spin polarizing and analysis methods.  This project aims to measure the edm on the level of 10-30 e.cm in the next few years.

In order to start with a molecular beam that is slow enough to be laser cooled (and possibly even laser slowed, where counter-propagating laser light is used to slow the molecular beam down to lower forward velocities), we begin by making a so-called buffer-gas beam of YbF molecules.  Here, we use a pulsed laser to ablate a solid Yb metal target in the presence of SF6 gas inside a copper cell cooled to 4 Kelvin.  The Yb atoms and SF6 gas react to form YbF molecules at elevated temperatures.  These molecules then collide with helium atoms that are at the same temperature as the cell.  A hole in one of the cell walls, together with a net flow of helium, sweeps YbF molecules out of the cell, producing a directed molecular beam.  At this point, the temperature of the beam is a few Kelvin, similar to that in the supersonic experiment but with a much reduced forward velocity.  Typical speeds are on the order of 150 m/s, about 4X slower than the supersonic beam used in previous experiments.

Once we have a slow beam, the EDM measurement scheme will proceed similarly to the supersonic beam experiment.  The molecules will fly through a pair of electric field plates in a region of combined electric and magnetic fields, where we monitor the spin precession to measure the EDM.  However, the molecular beam in this case is spatially and temporally long, meaning we need to adapt our techniques of spin polarizing and readout to deal with molecules that arrive at different times at the two locations.  We plan to do this all optically (as opposed to using pulses of RF radiation as we have done previously) and will be testing this soon.  We also need to create a long interaction region where the electric and magnetic fields are under extreme levels of control.  We will be employing a 4-layer magnetic shield to reduce the Earth's magnetic field to the required level and have to pay close attention to the vacuum/beamline construction to get it all right.  Obviously, any magnetic materials can't be used.  Less obviously, we even need to avoid any materials that are good electrical conductors, including the parallel plates that act as electrodes to generate the electric field!

Our third generation electron EDM experiment seeks to realize even longer spin-precession times, and correspondingly more precise measurements of the EDM, by making the measurement using YbF molecules in a 3D optical lattice.  This requires not only using laser cooling to cool the molecules to ultracold temperatures, but also to slow the molecules down so that they can be trapped and then cooled in all three dimensions. 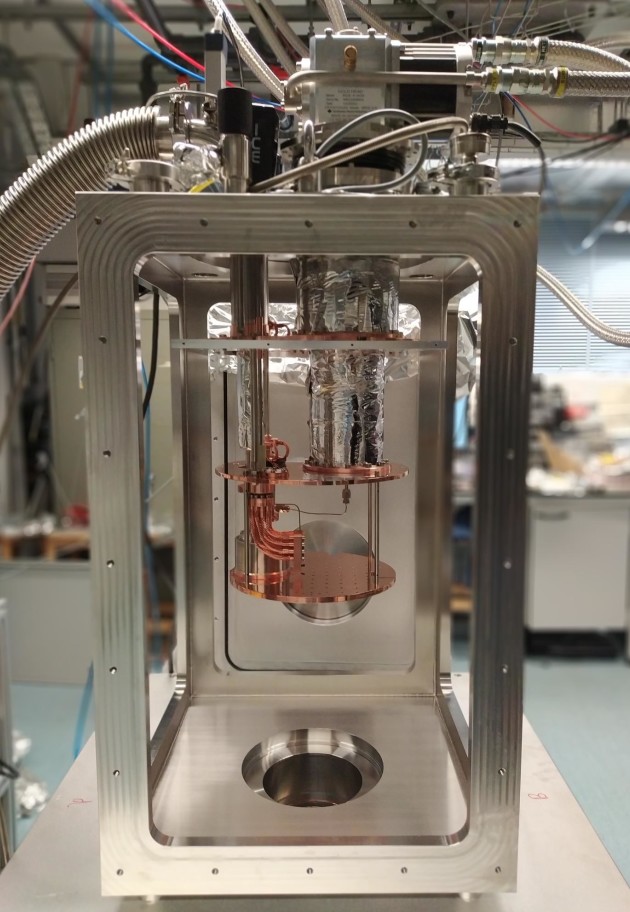 To make the beam slowing as straightforward as possible, the new experiment begins with a buffer-gas molecular beam based on a copper cell cooled to near 1 Kelvin.  This produces an exeedingly slow beam of YbF molecules, with a mean forward velocity around 80 m/s.  This is nearly an order of magnitude slower than our supersonic beam, and around twice as slow as our similar buffer-gas beam based on a 4 Kelvin cell (as would be expected from a simple energy/temperature argument).  We've now built the source and are optimizing it as the basis of our new measurement technique.  Next up is the daunting task of slowing down the YbF molecules by scattering photons off of them -- laser slowing.  Once slow enough, the molecules will be able to be captured in a magneto-optical trap, cooled, and loaded into an optical lattice where we can make our measurement.  This project aims to measure the EDM at the 10^-32 e.cm level.