Harnessing quantum mechanical effects at the single particle level will lead to huge advances in computation, communication, simulation and sensing. The first quantum revolution arrived at the invention of the transistor, with quantum mechanical tunnelling effects being used to propel technological, economic and social globalisation via high speed computing and the internet.  The second quantum revolution is upon us now, as we begin to isolate and manipulate individual atoms, molecules and photons – particles of light.

The Quantum Nanophotonics Team in the Centre for Cold Matter make use of cutting edge techniques for enhancing the interaction of photons and matter through the use of nanotechnology.  We pattern materials at the nanometre level to create photonic crystals, optical cavities and waveguides to guide and confine light, which can then be coupled to novel quantum emitters – two-level systems which can emit and process photons, including organic molecules and single atoms.  This molecular quantum technology can be used to create photon sources, photon nonlinearities and quantum memories – all of the building blocks required to develop quantum networks and simulators.

There are many technologies currently being pursued to develop quantum simulators and quantum computers, but one point remains clear – photons will be required to allow such systems to talk to one another; they are the only logical choice for quantum communication due to their low decoherence, ease of encoding and the fact that they do not readily interact with one another.  For this reason it is vital we develop the required technology to generate single photons, manipulate their frequency and interactions for processing capabilities and investigate the routing and deterministic detection of photons to bring enhanced quantum technology to real world applications.

Single molecules embedded in an organic matrix such as a crystal, Schpolskii matrix, or polymer are promising solid state emitters for quantum information technology. Host-guest combinations such as terrylene in p-terphenyl or dibenzoterrylene (DBT) in anthracene exhibit unity quantum yield, serving as on-demand single photon sources. At temperatures under 4 K, the so called zero-phonon-line (ZPL) can be excited such that it does not involve any vibrations or phonons, provides a near ideal two-level system with a strong dipole moment. The photons from the ZPL are transform-limited, hence quantum mechanically indistinguishable. Directly deposited on pre-fabricated photonic chips, single molecules will serve as nanoscale sources of optical nonlinearity and indistinguishable single photons. 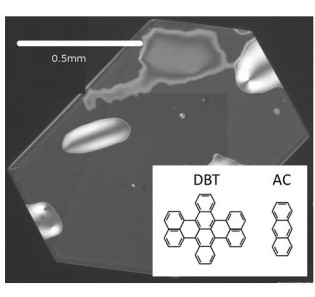 The chemical structure of DBT and anthracene are shown above, on top of a microscope image of an optical quality DBT doped anthracene crystal grown in our co-sublimation chamber. The thickness of the crystal is a few microns, while the large crystal face has dimensions on the order of millimetres. The crystal can be directly attached to optical fibres and nanophotonic waveguide chips which gives good optical contact and remains fixed in place through Van der Waals forces.

Thin film DBT doped anthracene crystals can be grown using a supersaturated vapour growth technique developed by our group. The concentration of DBT in the crystal can be easily adjusted and the films can be as thin as 50 nm.  This thickness is still ample to provide protection to the DBT from the surrounding atmosphere. This growth technique allows us to place emitters in nano-slots and on nanophotonic waveguides, and we are currently investigating growth on various photonic substrates and structures.

Another technique to intorduce molecules to nanophotonic devices is to introduce a molten mixture of DBT and anthracene into a reservoir or capillary. Upon cooling this mixture crystalises and is fixed in place. This method allows fine control of the doping density and localisation of emitters at well-defined positions.

A final technique we employ is the growth of organic nanocrystals via repreciptitation. An organic solution of DBT in toluene is mixed with anthracene in acetone and introduced to water that is being sonicated at high frequency. As the organic molecules cannot be dissolved in water, they gather together into small nanocrystals over time. These anthracene nanocrystals contain DBT molecules which act as single photon emitters. The nanocrystals are sub-micron in size meaning that photons can easily escape the organic matrix and be collected. We have recently shown that these nanocrystals can be encapsulated in a polymer shell to protext them from sublimation and make them last indefinitely even at room temperature. 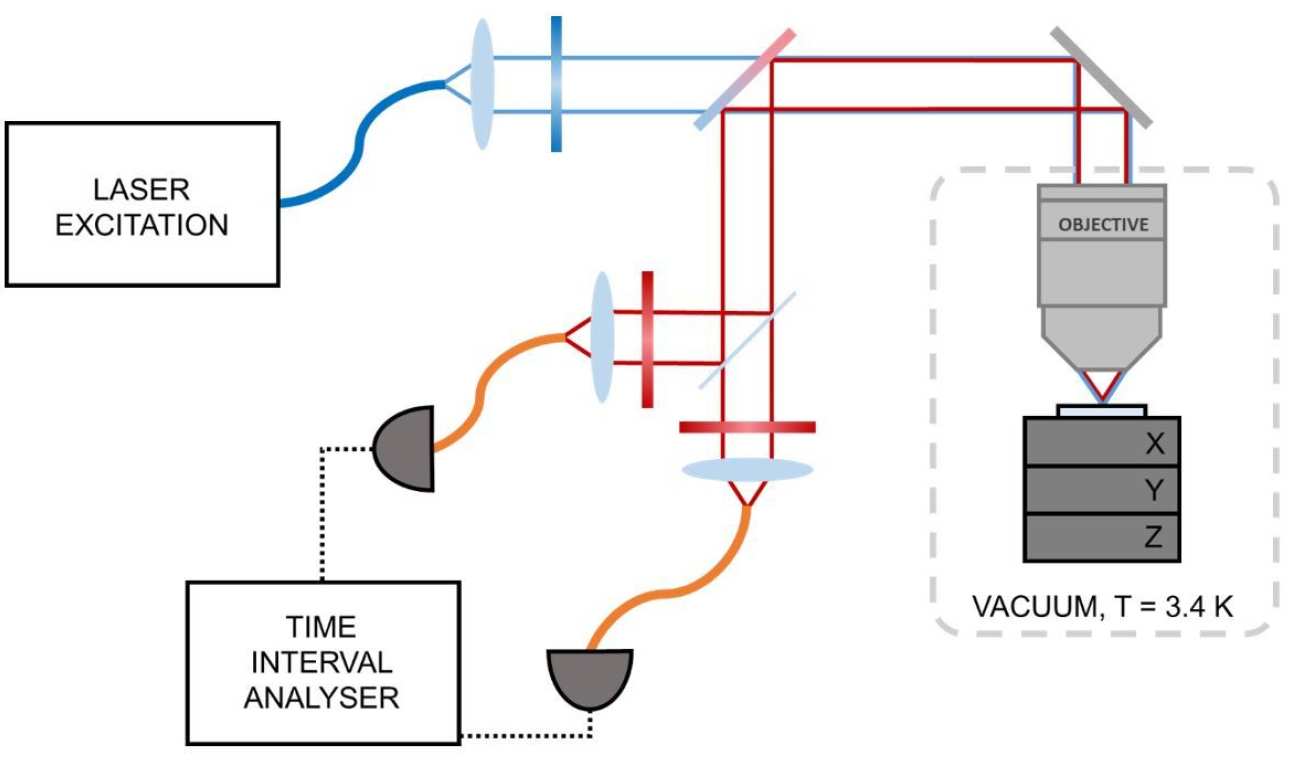 Organic molecules are very small, on the order of 2 nm across.  To characterise our samples we use fluorescence techniques in confocal microscopy. We have two microscopes, one with an interchangeable objective lens for room temperature experiments, and one housed in a closed-cycle cryostat for cryogenic experiments, shown schematically above. Both microscopes have high numerical aperture objectives and can reach a diffraction limited spot size of around 400 nm in diameter. By either scanning the sample around, or scanning the angle with which the beam enters the objective, we can adjust the position of an excitation laser spot on our crystals and measure fluorescence from different molecules.  In doing so we build up a picture like the one below, which is 20 x 20 microns in size. When molecules are cooled to cryogenic temperature their emission can be very narrow band in frequency, to the point where the bandwidth is only limited by the excited state lifetime of the molecule, the so-called Fourier-limit. A typical spectrum is shown below. By measuring the time of arrival of photons after a 50:50 fibre beamsplitter we can calculate the second-order correlation function of the light emitted by a molecule, shown below. In the case of a single molecule we see a clear anti-bunching, showing that we were detecting single photons from an isolated molecule, in this case from a DBT molecule in an anthracene nanocrystal.

We have a number of currently funded projects which aim to couple molecules to optical waveguides. When a molecule is placed near to or inside a nanophotonic waveguide the density of local photonic states is strongly enhanced, meaning that the molecule can be made to preferentially emit photons into the waveguide. To make this happen with high efficiency the waveguide effective area must be small, meaning that a nanophotonic device is preferable, and the molecule must be correctly positioned and oriented. We currently design and fabricated such devices using finite difference time-domain modelling and electron beam lithography followed by reactive ion etching. A typical device is shown below (left). It is a nanophotonic waveguide made out of silicon nitride, on a silica substrate. The gratings at either end of the waveguide allow light to be coupled in and out of the propagating mode (middle), while the small trench at the centre (right) allows molecules to be introduced into the centre of that mode, where we expect maximum coupling to occur. Molecules can be introduced by melting a mixture of DBT and the host matrix molecules, or by creating nanocrystals and positioning them on the device. We have recently experimentally demonstrated coupling of single molecules to these devices, characterised using cohereent interference between a pump laser and light scattered by the molecule into the waveguide in a technique called extinction spectroscopy. We are also investigating coupling to hybrid plasmonic devices in a collaboration with the Experimental Solid State group.

The waveguide coupling described above enhances collection of photons from a molecule, but not all of those photons come from the ‘zero-phonon line’ of the molecule, meaning that not all of them are narrowband and coherent. To enhance emission on this highly desired line, one can employ the use of an optical cavity. We are working with open-access fibre microcavities, shown in the schematic here. The cavity is formed by having a flat mirror on the facet of a v-groove array of fibres from which light enters, and having another hemispherical mirror opposite that refocuses the light back onto the fibre. A crystal of anthracene containing DBT molecules adheres to the flat mirror, introducing molecules into the cavity mode. The cavity length can be scanned using shear piezo-electric crystals such that it is n times the wavelength of emission of the DBT molecule. The molecule is thereby encouraged to emit photons at this wavelength, and those photons are efficiently coupled from the cavity to the fibre by having the fibre mirror reflectivity slightly below that of the round mirror. Using this geometry we expect coupling of a molecule to the single mode fibre of over 50%. 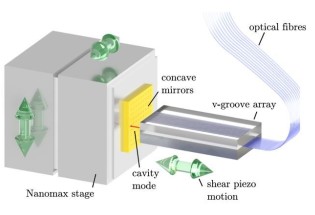 Enquiries can be directed to Dr Alex S. Clark - alex.clark@imperial.ac.uk

Centre for Cold Matter Homepage
Back to CCM Research page