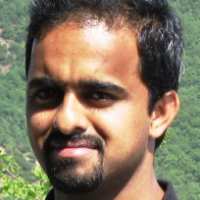 I was a Research Associate in the Complex Multiscale Systems group, where I also did my PhD under the supervision of Professor Serafim Kalliadasis. Prior to joining Imperial College London, I did my masters in Chemical Engineering in Indian Institute of Technology Madras, India.

My research focusses on thin-film flows with/without contact lines, with additional complexities such as substrate heterogeneities and gas flow. One problem that we looked at recently is the spreading of a droplet on substrates that are chemically heterogeneous. Can we make a droplet to move in a specified direction? Is it possible to confine it within a given region? We explored such scenarios by developing a mathematical model for the droplet, spreading on an arbitrary substrate [article]. For a sufficiently small droplet, we have shown via phase plane analysis that there exist multiple equilibrium droplet configurations. In solving this problem, we combine long-wave theory, matched asymptotics and numerics (spectral collocation method).

Another problem that we investigated recently is on shear-driven liquid films. Here, we try to develop a low-dimensional model that describes the dynamical behaviour of a thin liquid film, sheared by a co-flowing turbulent gas in an inclined channel [article]. We consider two types of solutions that the system can exhibit: solitary waves (characterized by a large hump followed by rapidly decaying ripples), and travelling waves (fixed volume under a wave). We analyze the influence of gas and liquid flows on the wave speed and the wave shape, by a pseudo-arclength continuation approach that are further supplemented by time-dependent computations. We are also interested in exploring the linear stability of the counter-current gas-liquid system and its connection to flooding.

Below you can see a video of spreading of a two-dimensional droplet on a substrate where the heterogeneities are localized. The droplet gets pinned at the heterogeneity spots, where the contact angle is large (more hydrophobic).