What is concept mapping?

Concept mapping is a graphic approach to supporting, monitoring, and measuring student learning around a particular concept (Hay, 2007). Concept maps visually represent “a set of concept meanings embedded in a framework of propositions," and are “created with the broader, more inclusive concepts at the top of the hierarchy, connecting through linking words with other concepts that can be subsumed” (Daley, 2002, p. 22). In Hay and Kinchin’s (2008) vast experience of using concept mapping as a teaching and research tool, 30-40 minutes is normally enough time for a concept map to be constructed, and it should therefore normally be possible to for students to produce their first concept map within a one-hour teaching session, including time taken to introduce concept mapping (20-25 minutes).

Novak (1998) initially developed concept mapping in the context of his broader constructivist theory of ‘meaningful learning’. The basic rules of the concept mapping method are explained in the below concept map (Figure 1). 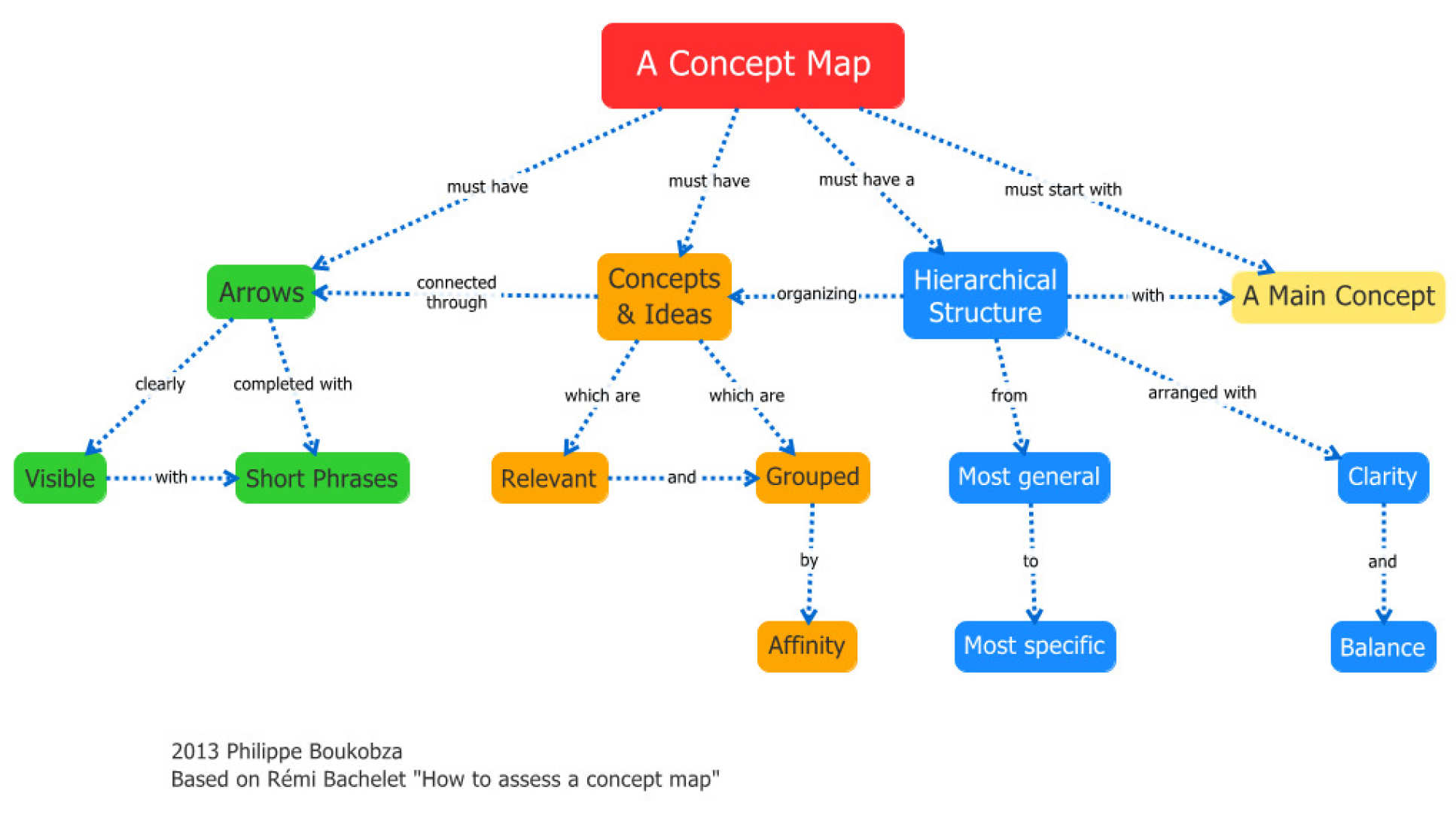 How do I use concept mapping, and why?

The main benefits of concept mapping are:

Concept maps therefore have a use both as a teaching and as a tool for evaluation or research.

As a teaching tool, concept maps enable the teacher to shift the focus from teaching content to “to helping the student create and understand the meaning of the concepts” (Daley & Torre, 2010, p. 442). Daley (2002, p. 23, adapted from Novak & Gowin, 1984) note the following five steps to make educational use of concept mapping:

"“Concept mapping is not a proxy for measurement of learning…; it is a means of exploring the real thing.” (Hay & Kinchin, 2008)

Concept maps can also be used to explore and/or measure student learning for research or evaluation purposes – that is, to understand how their learning develops, or to measure the extent of learning. Approaches to analysing concept maps for these purposes generally adopt either an ‘objective’ or ‘subjective’ approach. Brief discussions of both approaches are presented below. 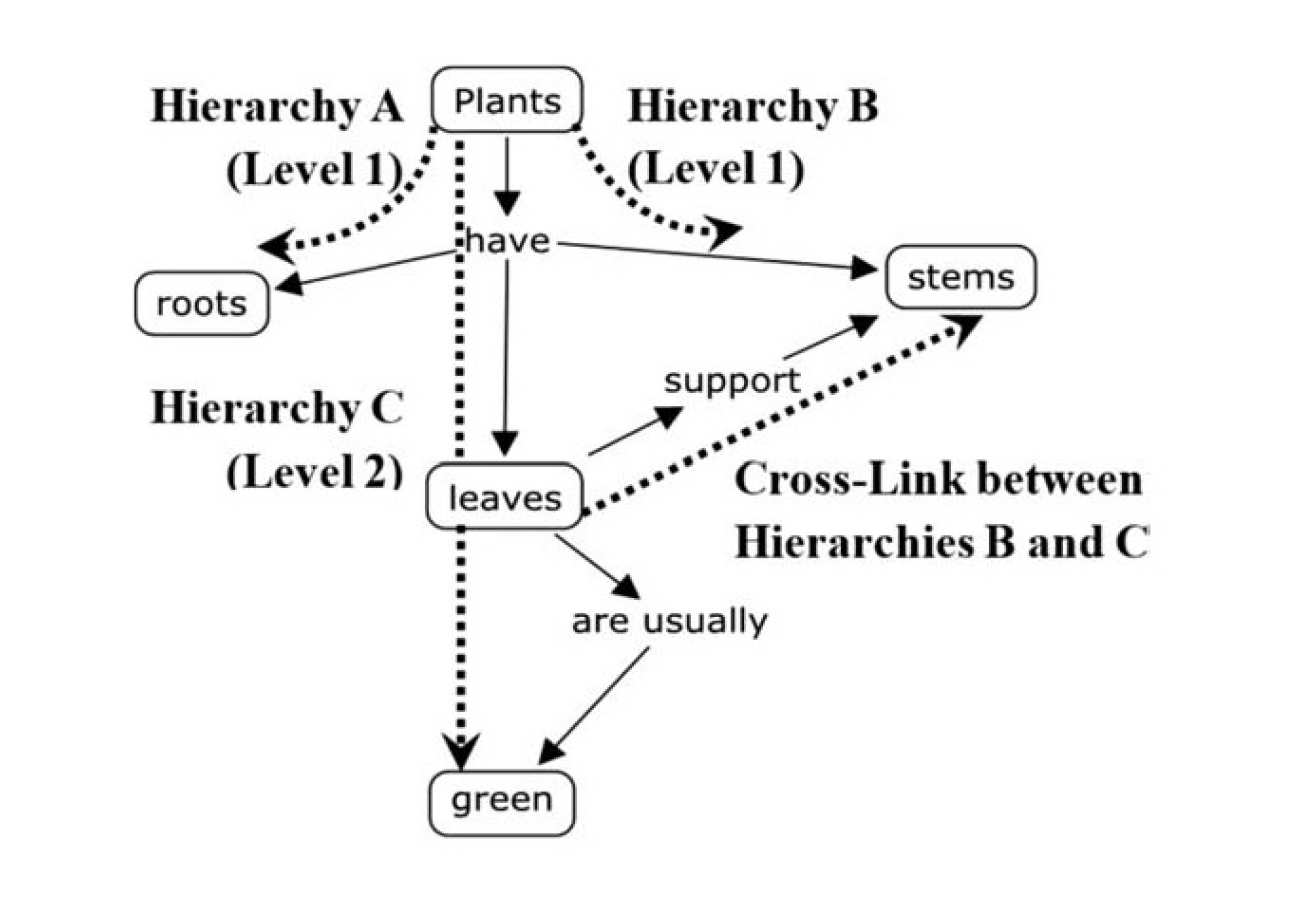 It can be characterised according to the following objective features:

Figure 2 therefore has a total of ten features (3 ‘hierarchies’ + 1 ‘second-level’ + 1 ‘cross-link’ + 5 total ‘relationships’). According to the objective approach, it is therefore a more sophisticated and ‘better’ concept map than one which had fewer than ten features, but worse than one which had greater than ten features. You would therefore be able to ‘objectively’ evaluate the development of students’ conceptual understanding by asking them to complete two concept maps at different points in time and seeing how many more features they had added. In this case, the additional features would represent the additional knowledge the student gained over time.

Most applications of the objective approach are somewhat more sophisticated than this, in that they add a weighting to certain features. For example, ‘cross-linkages’ and number of hierarchical ‘levels’ tend to be considered sophisticated features and therefore some rubrics attach additional ‘points’ to these features. For example, one common rubric (Daley, 2002, p. 23, adapted from Novak & Gowin, 1984)is presented in Table 1 below. We recommend consulting the wider literature and thinking about your own priorities to select a scoring rubric that works for you. (Besterfield-Sacre, Gerchak, Lyons, Shuman, & Wolfe, 2004; Daley, 2002; Novak, 1998; Novak & Cañas, 2006; Van Zele, Lenaerts, & Wieme, 2004; Watson, Pelkey, Noyes, & Rodgers, 2016).

Other developments in concept mapping and meaningful learning have moved towards a more subjective approach, incorporating qualitative analysis as well as quantitative (Kandiko, Hay, & Weller, 2012; Kinchin, Hay, & Adams, 2000). These approaches focus on the holistic quality of students’ concept maps (and changes over time) rather than simply on a quantitative counting and scoring of the specific features of a concept map. While this inevitably involves subjective judgements, to maintain rigor and validity, it is a good idea to: (i) have more than one expert/teacher assess the map, and (ii) adhere to a common set of criteria.

To help you think through how an holistic, subjective assessment might work in practice, we provide three examples of paired concept maps exhibiting (i) surface/rote learning, (ii) non-learning and (iii) deep learning, respectively. All figures and accompanying assessments/explanations are from Hay et al. (2008). The concept maps are around the topic of magnetic resonance imaging (MRI). 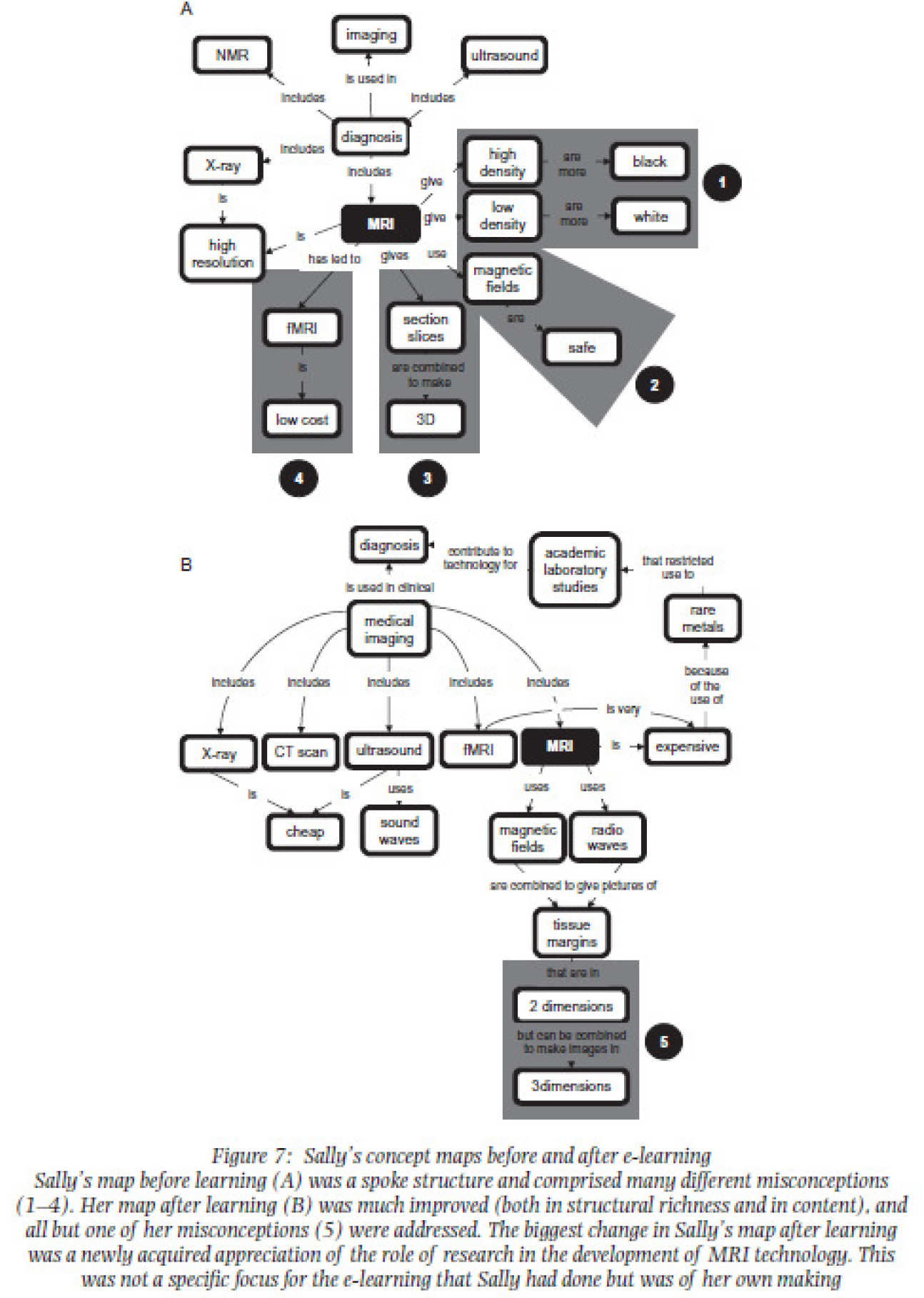