The two principal accomplishments of this PhD research (Anna Hankin) project were as follows:

Acidic Ni(II) sulfamate solutions are widely used for industrial nickel electroplating, when coatings with low stress are required. Applications for low stress nickel coatings are found, for example, in the aerospace and motor industries where engines and turbines require corrosion and friction resistant surfaces.

The finite lifetimes of sulfamate-based plating baths are caused by the tendency of the sulfamate ions to hydrolyse to ammonium and sulfate ions at the typical bath operating conditions of pH below 2.5 and temperatures above 65oC. Accumulation of ammonium ions causes increased stress in nickel deposits and at a critical ammonium ion concentration the solutions are rendered spent. Such solutions require treatment to recover the nickel, as they typically contain > 103 mol Ni(II) m-3, whereas consent concentrations for discharge to sewers are < ca. 2×10-2 mol m-3. Electrochemical treatment of spent solutions to recover the nickel is considered most practical and cost-effective in comparison with other treatment methods such as precipitation or by ion exchange resin. 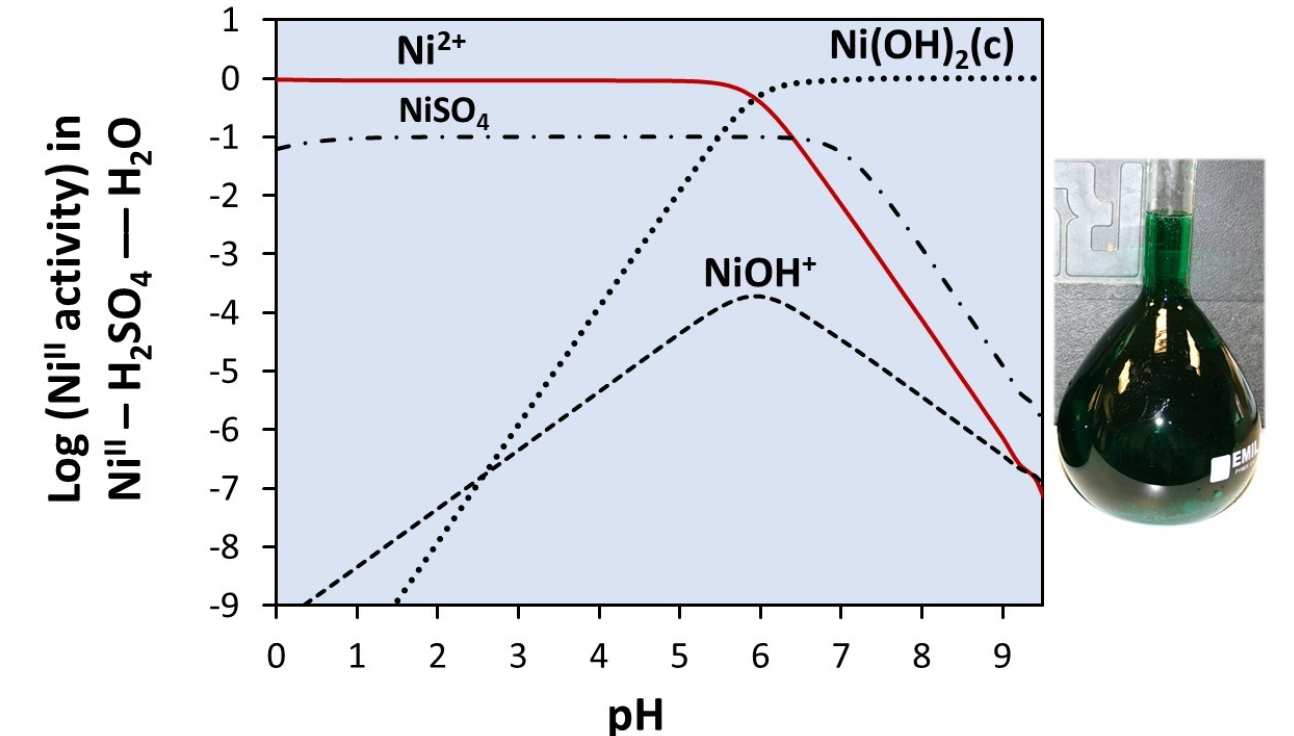 We believe it is unlikely that Ni(II) electrodeposition proceeds via the Ni(OH)ads intermediate, due to the negligible concentration of NiOH+ relative to uncolplexed Ni2+ (aqueous speciation shown on the right). We postulate that the reduction proceeds via the Ni+ads intermediate, which competes for electrode surface area with adsorbed hydrogen atoms.

Our micro-kinetic model is able to compute the Ni(II) reduction rates and reduction efficiencies as a function of Ni(II) concentration, applied electric potential and the bulk pH. The processes of Ni(II) and proton reduction in sulfamate solutions were treated as sequential one-electron charge transfer reactions involving adsorbed intermediates, NiIads and Hads, respectively, which obey the Langmuir adsorption isotherm and compete for surface sites.  The unknown micro-kinetic parameters (the kinetic rate coefficients and the charge transfer coefficients) were computed by fitting the model to experimental data in gPROMS (Process Systems Enterprise).

Ni(II) recovery from effluents by electrodeposition

This project was completed with the successful development, characterisation and operation of a membrane-separated electrochemical reactor, enabling the recovery of Ni(II) from nickel sulfamate effluents at a current efficiency above 94 % at specific electrical energy consumption of ca. 4,300 kW h (tonne Ni)-1, while depleting the Ni(II) concentration from ca. 2 kmol m-3  by two orders of magnitude.

A macro-kinetic model enabled accurate advance predictions of Ni(II) depletion rates, reduction current efficiencies, pH trends and current-potential relationships in a bench-scale reactor (right) as well as a pilot plant reactor, built for the investigation of nickel effluent treatment. This model comprised a set of charge and mass balances on Ni(II), protons and other relevant species in a membrane-separated bench-scale reactor, built specifically for the investigation of nickel effluent treatment.

For reactor images from the project please visit the Gallery.