Environmental and Water Resource Engineering at Imperial College began in 1949 following a visit to London by Professor Gordon Fair of Harvard University. It had been noticed that, although British engineers had been pioneers in the development of water supply and waste disposal techniques, unlike their counterparts in North America, its universities had largely confined their teaching to short undergraduate courses. Thus, with 3 years funding from the Rockefeller Foundation, F.E. Bruce was appointed Fellow in Public Health Engineering, a small laboratory was established and a postgraduate course set up jointly with the London School of Hygiene and Tropical Medicine. This postgraduate course began in Oct 1950 with 8 students.

In 1949, P.O. Wolf was appointed lecturer of Fluid Mechanics and Hydraulic  Engineering in the Hydraulics section. His previous professional experience had, however, concerned land drainage, flood-protection and hydro-electric schemes. Thus when, in 1953, a meeting of government hydrologists in East and Central Africa requested that a postgraduate course in Hydrology be established  at Imperial College, the responsibility was passed to Wolf. Aided by the Chief Hydrologist of Kenya, F. Grundy, and his assistant, H. Underhill (who later also became a lecturer), Wolf established the one-year full-time postgraduate course in Engineering Hydrology in Oct 1955. A year later, Wolf became a Reader and Head of the newly formed Hydrology Section. 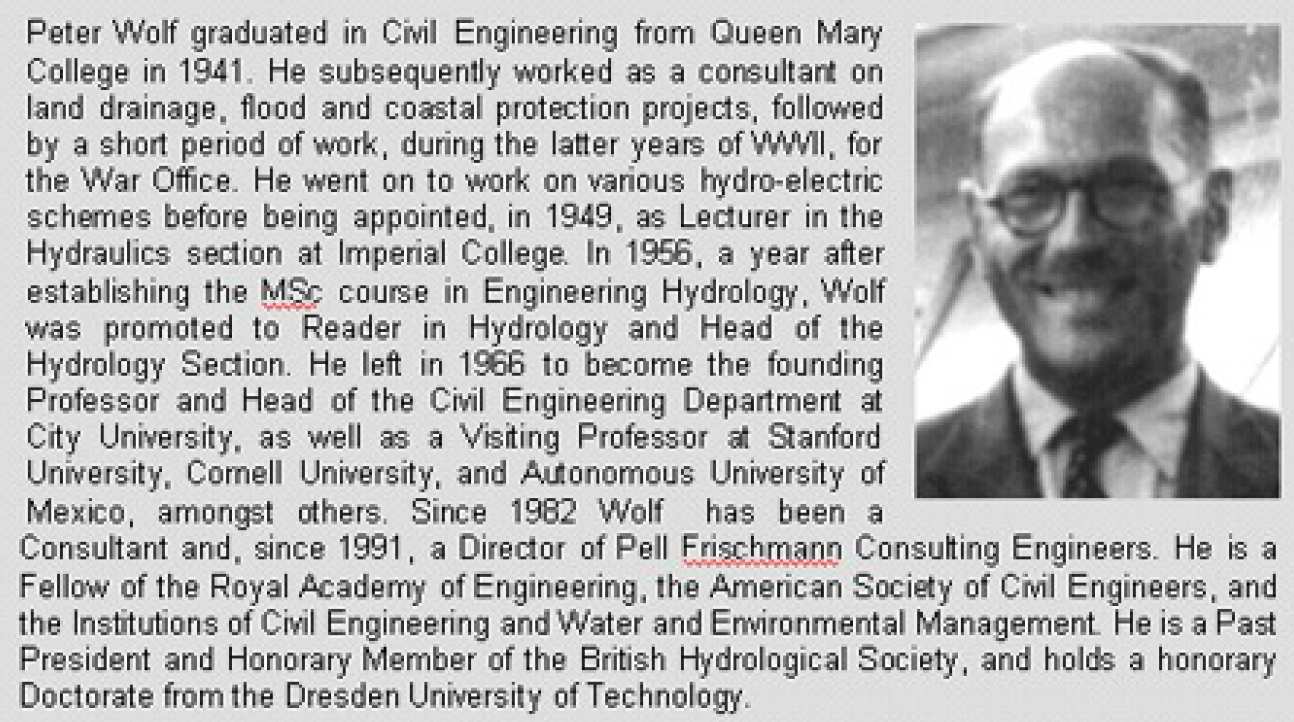 Up until 1964, both the Public Health Engineering and Engineering Hydrology postgraduate courses led to the award of Diploma of Imperial College (DIC). This changed in 1964-65, however, when new University Regulations and more stringent examination procedures led to MSc degrees being awarded, in addition, for the first time.

Underhill left the Hydrology section in 1958 and was replaced by T. O’Donnell in 1959. They were joined, between 1963 to 1966, by R. More as lecturer, who was then succeeded by E.M. Shaw. When Wolf left for City University in 1966, O’Donnell became Reader and Head of the Hydrology Section, and appointed both M.J. Hall and, in 1968, P.E. O’Connell as lecturers.

Bruce in the PHE section was joined by G.T.J. Fox as a lecturer in 1953, followed by A.L. Dowley in 1962. Dowley left for University College, Dublin, in 1969 and was replaced in May 1970 by R. Perry. Perrys’ arrival immediately signalled a greater emphasis being placed on the Research activities of the PHE section, which diversified to include air pollution control, water and wastewater treatment and the management and control of solid, toxic and hazardous wastes.

O’Donnell left the Hydrology section for Lancaster University in 1972, followed by O’Connell and Hall in 1976. A year later, Bruce retired from the PHE section. By this time, a close collaboration had developed between the Public Health Engineering and Engineering Hydrology MSc courses. A linking of the two subjects was also timely following the reorganisation of the Water Industry in England and Wales. Hence, in 1977 the new Head of Department, Prof B.G. Neal, oversaw the creation of the Public Health and Water Resource Engineering section, appointing Perry as its Head. 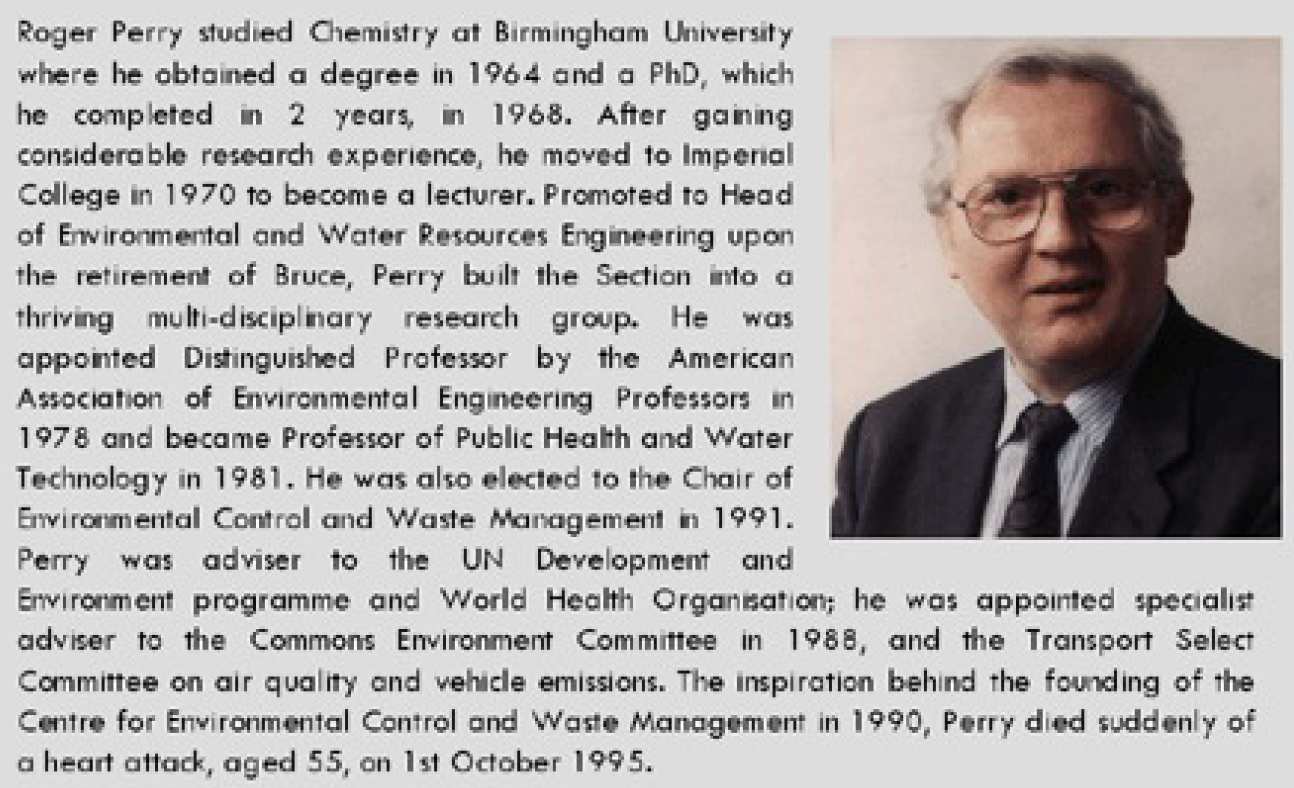 The Public Health and Water Resource Engineering Section, created in 1977, experienced rapid expansion and change under Perry, with N.J.D. Graham, J.N. Lester and P.W. Jowitt immediately appointed as lecturers, followed by H.S. Wheater and T.G. Davis in 1978, and J.P. Lumbers in 1979. After 27 years, Fox retired in 1980. In 1982, M.B. Beck was appointed as lecturer. Although a member of the Systems and Mechanics Section, Beck’s research interests resulted in a long and close working partnership with PHWRE. 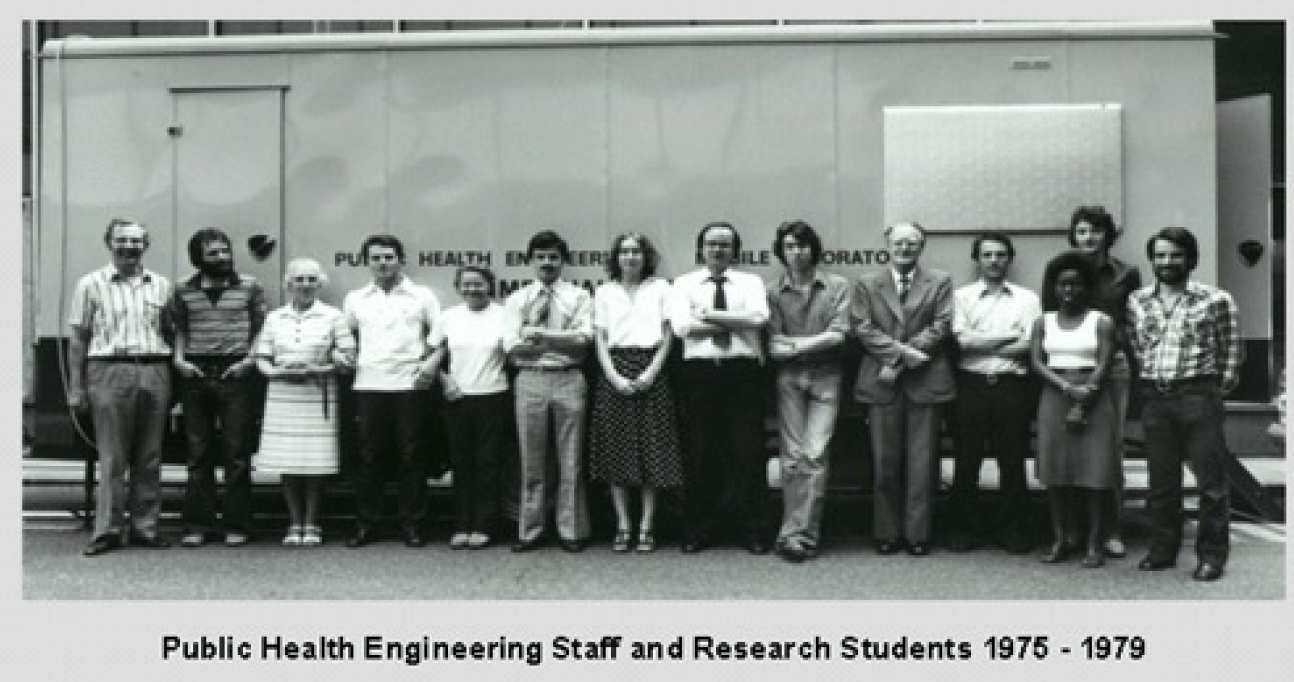 Perry founded the Centre for Environmental Control and Waste Management (CECWM) in 1990, the year in which the PHWRE Section was also renamed Environmental and Water Resource Engineering (EWRE). Lumbers left, to be replaced by D. Butler in 1992. Beck followed shortly afterwards for a Chair at the University of Georgia. A.P. Butler was appointed as lecturer in 1994. 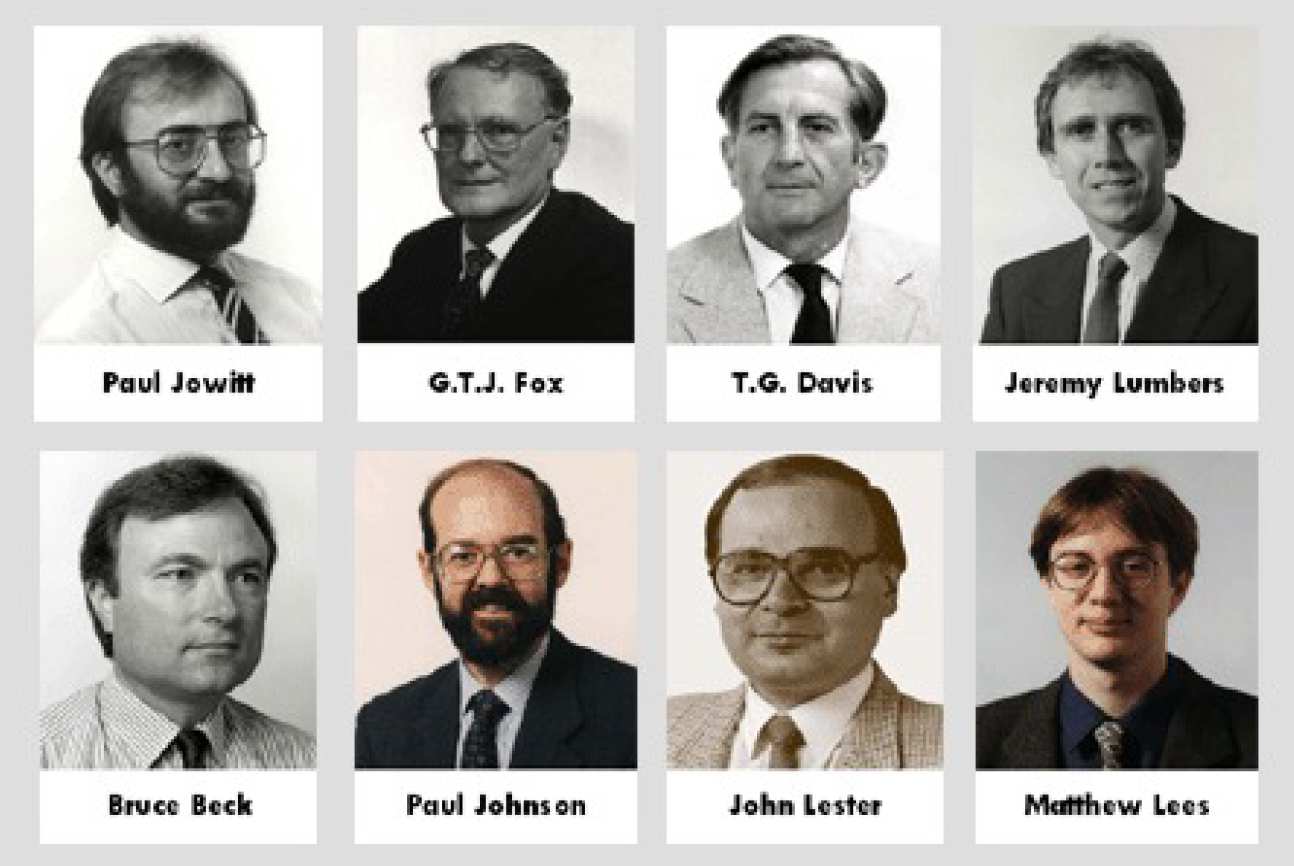 Perry very sadly died suddenly in 1995, which led to the appointment of H.S. Wheater as his successor. C.R. Cheeseman and M. Lees became lecturers in 1996, and the activities of the Section were complemented by a long-term association with Prof C.T. Maksimovic from the University of Belgrade. In 1997, S.R. Smith also became a lecturer following the departure of Lester. 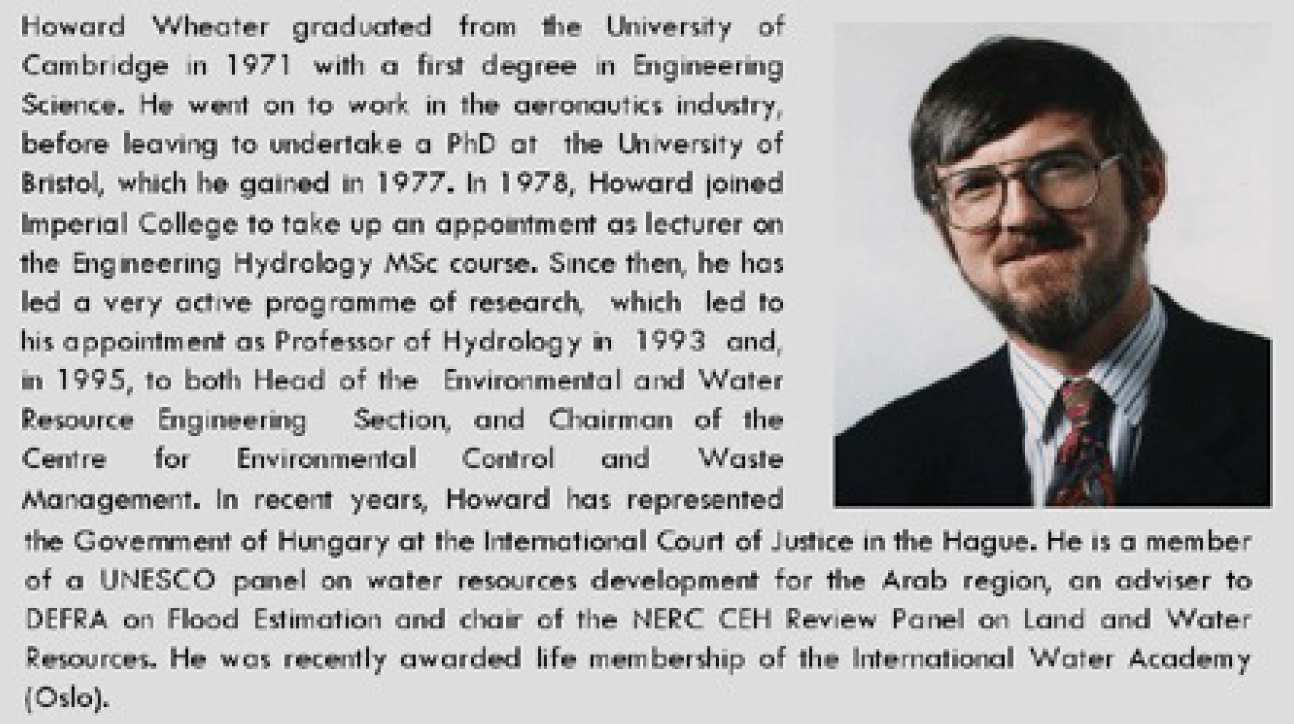 The importance of environmental issues and the status of the EWRE section became evident in 1998 with the renaming of the Department to that of Civil and Environmental Engineering. Also in 1998, a long-term post-doc, G.D. Fowler, became a member of staff and in 2000 another, S.D. Lambert, replaced Prof Graham as lecturer whilst on sabbatical in Hong Kong. In 2001 N.R. McIntyre was appointed as a replacement for Lees and the new ‘Roger Perry’ laboratory suite, costing in excess of £1.5 million, was opened. Dr Fowler is now the current Laboratory Manager. 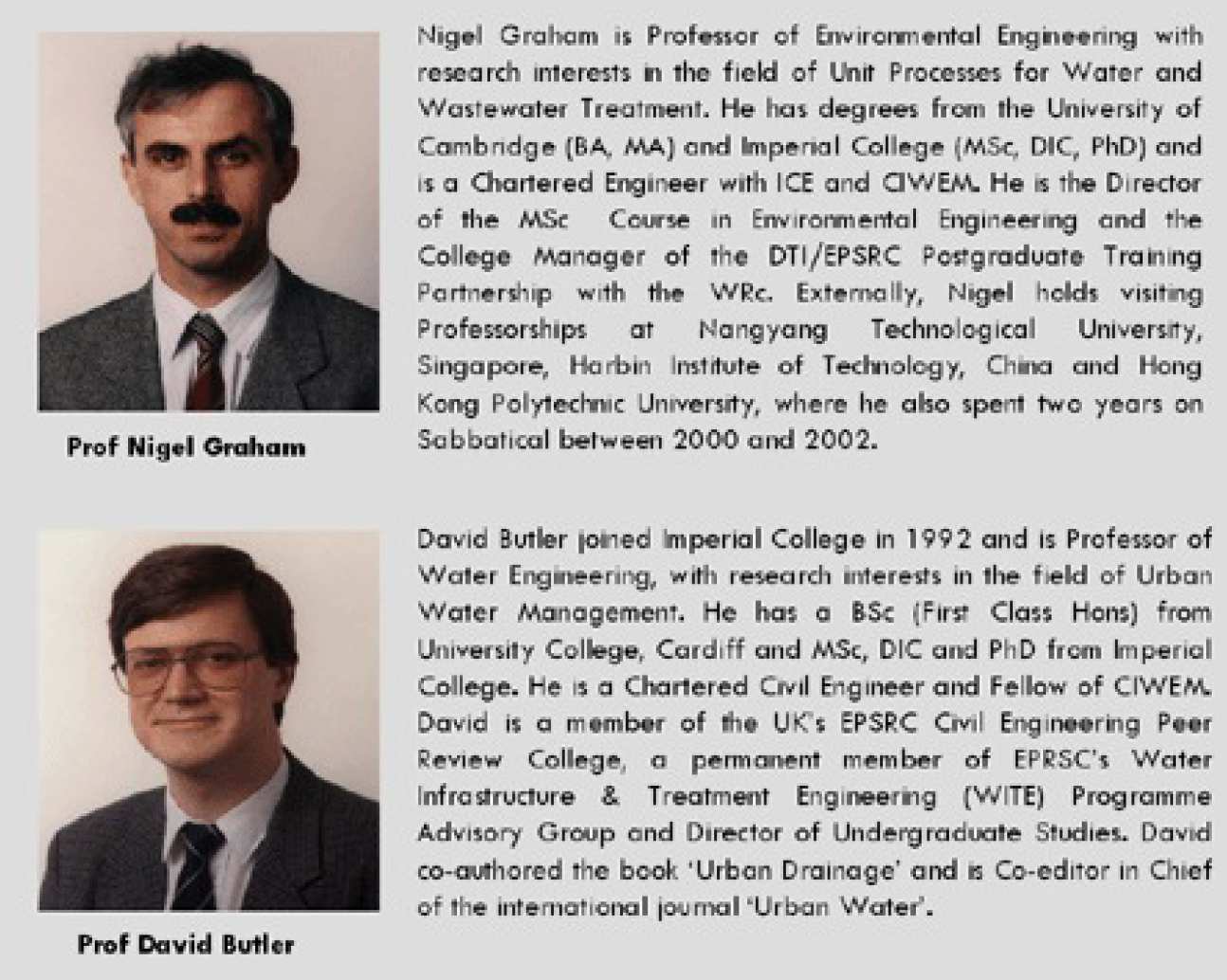 Lambert left on Graham's return in 2002. In June 2005 Sue Grimes joined the section as the College's first Chair of Waste Management and as the Director of CECWM. David Butler left for the University of Exeter and was replaced by Mike Templeton from the University of Toronto in 2006. Another long term post doc Ivan Stoianov after a brief stint at MIT returned to a lectureship post in 2007, the same year Simon Mathias a former MSc and PhD student in the section was appointed a Lecturer in Environmental Engineering.

In 2009 Howard Wheater took on the role of Director of Imperial College Environmental Forum and his teaching responsibilities were temporarily taken over by  Wouter Buytaert who joined the section from Bristol University. Nigel Graham became Head of EWRE section and Simon Mathias left and joined Durham University. Dr Buytaert became a permanent member of staff  in 2010 when Howard Wheater left the department after over 30 years of  service and joined The University of Saskatchewan to open their National Hydrology Research Centre. He was awarded the title Canada Excellent Research Chair.  He remains an Emeritus Professor at Imperial.

The section expanded further and 3 more academic members of staff were recruited to the division.  Nataliya LeVine who completed her PhD studies at the University of Arisona joined the section originally as a post-doctoral researcher in 2008.  Ana Mijic obtained her masters degree in Hydrology for Environmental Management  in 2009 and a PhD in Earth Science and Engineering in 2013 both at Imperial College. James Keirstead completed his PhD at the University of Oxford in 2006 and he first joined Imperial College as a post-doctoral researcher in Chemical Engineering, before moving to Civil Engineering in 2011.