The Greek crisis – is there a way out? 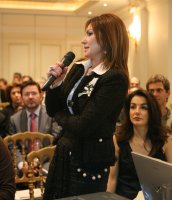 The Greek crisis – is there a way out?

The conference will focus on ‘The Greek crisis – is there a way out?’

The members of the panel for the conference are:

Read biographies of the panel members

The panel and discussion will be co-ordinated by Dr Konstantinos Aravossis (Business School MSc Management Science 1987), President of Imperial College Business School Alumni Association and Lecturer in Enterpreneurship and Investment Analysis at the National Technical University of Athens (NTUA-UOA).

This event has now reached full capacity and registration has closed.

If you previously added your name to the waiting list, you will be notified via email in advance of the event if a place can be made available to you.

We regret that entry to this event cannot be guaranteed if you have not registered in advance.

Christos Staikouras was elected MP in Fthiotida with Nea Democratia in the national election of 2007 and 2009. He currently holds the position of Deputy Head of Economic Policy Sector within Nea Democratia.
Since 2006 Christos has been Assistant Professor of Finance at the Athens University of Economics and Business. Between 2004 – 2007 he was part time academic staff at the Hellenic Open University. He was previously Lecturer at the Athens University of Economics and Business and Visiting Professor at the universities of Thessaly, Athens and City. He has also held positions of high responsibility in recognised prestige financial organisations such as Eurobank (2000 – 2004) and the Bank of England (2000).

Christos has published many scientific papers in Greece and abroad and has participated in scientific international conferences presenting his papers. He is a member of scientific and research societies and committees.

Alekos Papadopoulos is a lawyer by profession and studied Law at the University of Athens and Political Sciences at the Panteion University.

In October 1993 he became Deputy Minister of Economics; he was promoted to Minister four months later. Due to his dedication to forwarding the necessary structural adjustments and reforms for Greece to enter the European Economic and Monetary Union, his service as a Minister of Economics was related to the achievement of macroeconomic stability and the convergence of Greece with the rest of the developed European countries. He created several important economic institutions and units, among which the Financial and Economic Crime Unit, the National and the Regional Auditing Centers, and the Economic Inspectors of the State. Further, he developed the integrated Taxation Information System TAXIS, created the School of the Ministry of Economics for the training of civil servants on contemporary administration systems, and more.

From September 1996 to February 1999 he was Minister of Internal Affairs, Public Administration and Decentralization. He implemented many structural reforms, most importantly “Kapodistrias”, a program for the administrative restructuring of Greece; the new structure of the country consisted of 13 autonomous regions, while also reducing the number of municipalities and villages by almost 85%. Moreover, he created several institutions, among which the “Citizen’s Advocate” and the Unit of Inspectors of Public Administration.
In April 2000 he was appointed Minister of Health and Welfare. He remained in that post until June 2002. In order to reconstruct Public Health, he promoted several decentralizing reforms, among which the integrated program “Health for the Citizen”.

In March 2010 he joined the NBG Group as Chairman of the Board at Ethniki Insurance Co. From 2005 to 2006 he served as Advisor to the Administration at EFG Eurobank. From 2000 to 2004 he was Executive Vice-President at TT Hellenic Postbank and Chairman at TT Hellenic Postbank-Hellenic Post AEDAK (TT ELTA AEDAK). From 1998 to 1999 he served as Chief Executive Officer at the Bank of Central Greece and during the years 1994 – 1998 he was Deputy General Manager at Egnatia Bank. He started his career at National Investment Bank for Industrial Development (ETEBA S.A.) (1986-1994).

Elias Karakitsos is Chairman of Global E conomic Research and is an Assoc iate Member of the Cambridge Centre for Economic and Public P olicy, University of Cambridge. He was at Imperial College London for nearly 25 years where he held the position of Chair of Economics and was Head of Economics for ten years. He has acted as an advisor to the UK, US and EU governments and as an investment advisor to many financial institutions, including Citigroup, Oppenheimer, Allianz, Credit Agricole and Standard Chartered. He is the author of five books/monographs, nearly 100 papers in learned journals and more than 300 reports on financial markets. Public versions of the author’s CV can be found in “Who’s Who in the World” and “Who’s Who in America”.

The alumni conference and reception will take place during the weekend of a recruitment fair for prospective Business School students in Greece.

Prior to the alumni reception, we will be making a presentation to prospective students at the King George Palace Hotel. This event is an opportunity for attendees to get an overview of the Business School and to meet and talk with alumni from a variety of programmes.

If you know of any high-calibre individuals interested in pursuing a postgraduate degree at the Business School who might like to attend, please direct them to the following webpage for further details and to register.

In case of any queries