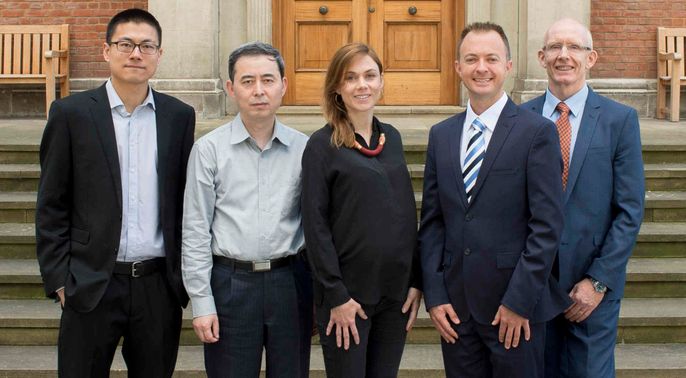 Latest Award by the Group 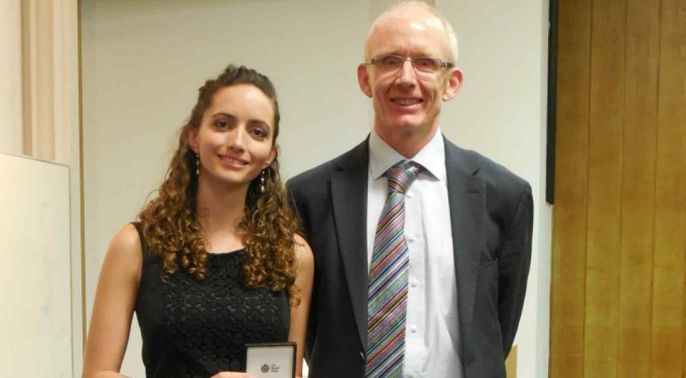 We are delighted to announce that Andrew Livingston has been selected to receive a highly prestigious EU ERC Advanced Research Grant worth €2,499,814 to undertake research into Advanced nanomembranes for exact polymer production (EXACTYMER).

In this work it is shown that PEEK membranes are “green” from the production point of view when compared with commercial polyimide (PI) based organic solvent nanofiltration (OSN) membranes. Green metrics and waste cost were used in order to assess the environmental burden of PEEK membranes. Scaling-up of PEEK membranes to spiral-wound modules was successfully achieved. The results showed a waste cost of 1.4 £ m−2 of membrane, significantly lower than PI based membranes.

See here for details of the paper.

Dr Patrizia Marchetti has been awarded the 2015 Sir William Wakeham Award for outstanding research in the field of organic solvent nanofiltration - especially the ability to estimate parameters for as yet uncharacterised systems and predict when the model parameters for a particular solvent-solute system are available – highlighted in significant publications in the Journal of Membrane Science. Sir William Wakeham is a visiting professor at the Department of Chemical Engineering, having first joined as a lecturer in 1971. He served as Head of the Department from 1988 to 1996 before becoming Deputy Rector of the College. In recognition of his contributions to Chemical Engineering, the Sir William Wakeham Award was instituted to recognise early career researchers who have made a significant contribution to their field and advanced their career development.

Membranes with unprecedented solvent permeance and high retention of dissolved solutes are needed to reduce the energy consumed by separations in organic liquids. The team used controlled interfacial polymerization to form free-standing polyamide nanofilms less than 10 nanometers in thickness, and incorporated them as separating layers in composite membranes. Manipulation of nanofilm morphology by control of interfacial reaction conditions enabled the creation of smooth or crumpled textures; the nanofilms were sufficiently rigid that the crumpled textures could withstand pressurized filtration, resulting in increased permeable area. Composite membranes comprising crumpled nanofilms on alumina supports provided high retention of solutes, with acetonitrile permeances up to 112 liters per square meter per hour per bar. This is more than two orders of magnitude higher than permeances of commercially available membranes with equivalent solute retention.

"Membranes are currently used for a range of important tasks such as making water drinkable and life-saving kidney filtering. The drawback has been that industry hasn't been able to use membranes in organic liquid systems more widely because they've had cost and design limitations. Our research (reported in Science Journal) suggests that we can overcome these challenges, which could make these membranes useful for industries ranging from pharmaceutical companies to oil refining. The energy and environmental benefits could be massive." (Andrew Livingston).

Researchers from the Livingston Group had a fun day at the Imperial Festival on Sunday 10 May 2015 where they, along with researchers from the Li and Bismarck Groups, demonstrated the energy (power) requirements for purifying water using membrane separation vs evaporation. The demonstration was a talking point at the festival. Throughout the day hundreds of adults and children came to have a go at water purification using pedal power to see which was the most energy efficient technique: membrane vs evaporation? 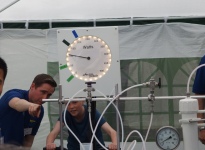 Two energy (electricity) generating bicycles were used: one connected to a membrane unit and the other to an evaporation unit. The amount of water produced from each unit after a few minutes cycling was compared. 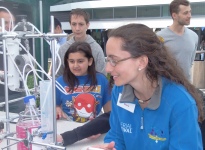 Left: Maria explains the membrane filtration process to members of the public. 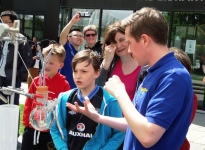