The Journey towards Rowing Gold at the Olympics

From Sports Innovation, Technology and Researchand research papers from the McGregor and Bull labs

We are proud that our involvement with the GB team has contributed to great success and improved their overall performance at various Olympic Games. Moreover, Team GB’s rowing success at the London 2012 games influenced participation in the sport, with over 32,000 people signing up for rowing courses in the UK, and 1000 new applicants to the GB Rowing’s START talent ID programme, which is seen as a gateway to elite performance.

Biomechanics, the study of the mechanical structure and function of biological systems, is fundamental to most of the research being carried out in the MSk MEC. Rowing is a motor skill that requires a high level of consistency, coherence, accuracy and continuity. Hence the repetitive nature of the rowing stroke makes it ideal for detailed biomechanical analysis.

With an initial focus on injury prevention rather than performance enhancements, our research has demonstrated a clear link between the two; because by understanding how and why injuries occur, we can impact performance by preventing injuries. Research from the McGregor and Bull labs at Imperial College has also been able to identify characteristics of the rowing stroke and some potential sources of poor techniques as shown in Figure 1, Steer et al. Also, concurrent studies using an interventional Magnetic Resonance Imaging (MRI) scanner, highlighted the importance of considering the entire lumbo-pelvic motion during rowing rather than spinal motion in isolation, McGregor et al.1. 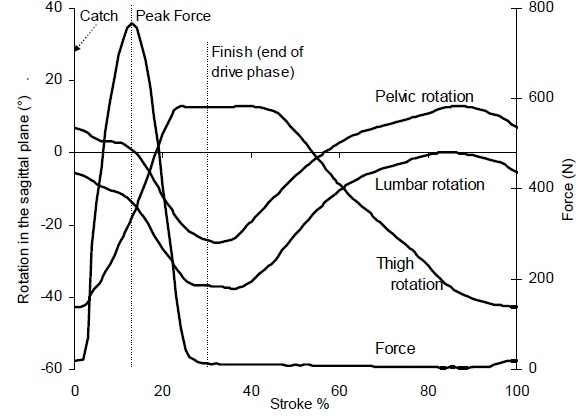 More importantly, findings from McGregor et al.2 suggested that, it is possible to make athletes more biomechanically efficient for the same physiological work load, and thus have a direct impact on performance. They showed this by improving trunk strength and control, whilst changing the biomechanics technique and optimising the use of the pelvic during a rowing stroke. These findings changed the focus of rowing research from injury prevention to performance impact. It also allowed our researchers to develop a new set up approach that was used over an Olympiad to test and provide feedback to the elite women’s and lightweight men’s and women’s GB rowing team.

A biofeedback tool that provides visual real-time biofeedback and biomechanical summaries to athletes and support staff has been developed by our researchers as part of a 14-year study. The tool acquires, analyses and interprets data in real time. Data collection includes force at the handle, kinematics of the lumbar spine, pelvis and lower limb, power and handle position, seat loading and seat centre of pressure, and foot symmetry. This biofeedback tool for ergometer rowing was adopted by the British elite rowing squad that represented the UK at both World Championships and Olympics. The athletes rated feedback from the tool highly, and it appeared that one of its greatest strengths was in becoming a common language between the coach, support staff, scientist and athletes, McGregor et al.3.

We are delighted that research from the McGregor and Bull labs has had an impact on rowing, and we propose that similar approaches can be used for other sports, particularly those with a repetitive nature such as cycling and running.

Sign up to our Technology Network to receive information about events, news and funding opportunities.

Join the discussion on LinkedIn