The competition theme for 2018 focused on the UN’s Global Goals for Sustainable Development. Teams were asked to select a specific goal and to come up with a new and innovative scientific solution in response to this.

To enter, teams had to create a 5 minute film that: briefly outlined the goal they had selected; described their innovative solution; explained the science behind the idea; and illustrated how their idea would address the goal.

Six finalist teams were invited to present their ideas at a showcase event at Imperial College on 21 March 2018 in front of a live audience and a panel of VIP judges.

The Schools Science Competition 2018 winners were 'Aqua Power', pictured below. The team are from Ashmole Academy and are formed of Dennis Mundzhalov, Ronald Gower, Matthew Holroyd and Guner Mertcan. They were mentored by Dr Stevan Simonovic. The team received a winners trophy, individual prizes, plus the opportunity to visit an exciting world-leading science facility in the UK. 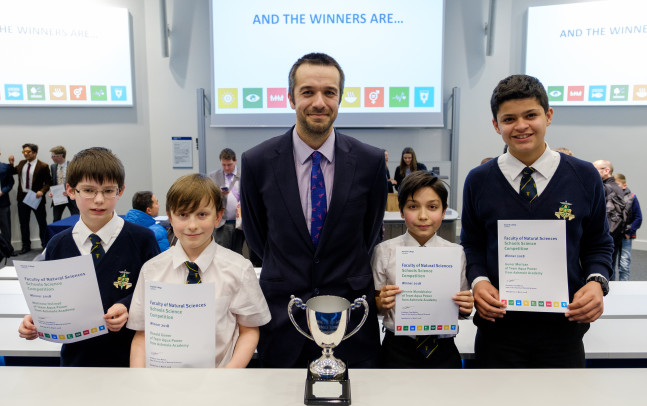 Our other finalists were:

This year, our judging panel included:

Dr Simon FosterSimon is the Outreach Officer for the department of Physics at Imperial College and a former school teacher. He has a degree in Physics with Space Science (he's a qualified Rocket scientist) and a PhD in Solar Physics. Simon is passionate about inspiring and enthusing students of all ages to fall in love with science- check out his fantastic children’s Christmas lecture ‘It IS rocket science’. Simon is also an expert panel member on Sky TV’s science show “Duck Quacks Don’t Echo”.

Renee WatsonRenee is the founder of The Curiosity Box, the first STEM subscription box in the UK, aimed at families of 7-11yr olds. Learn more about Renee:  Renee Watson profile. ‌‌

Vicky Pope
Vicky is Head of Science and Technology Futures at the Met Office. 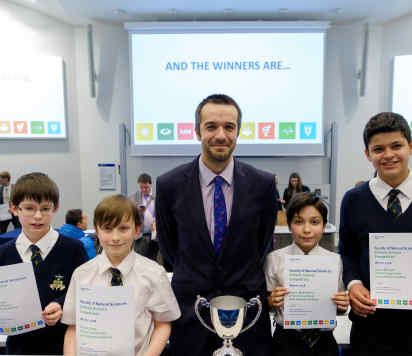