Scientists studying populations of gray wolves in the USA's Yellowstone National Park have developed a way to predict how changes in the environment will impact on the animals' number, body size and genetics, amongst other biological traits.

Writing in the journal Science, the researchers say they now have a way to predict the extent to which climate change could simultaneously impact animal numbers and the ways in which animals are likely to evolve. The results could now be used by other groups to predict how future wolf populations will respond to climate change and to inform the actions of conservationists.

This study provides a powerful mathematical model to explore the links between environmental change, changes in population size and simultaneous recent rapid physical changes, such as the shrinkage that has been seen in animals like polar bears and Soay sheep. The research was led by Imperial College London and involved colleagues at the United States Department of the Interior, Utah State University and the University of California.

Previous studies have shown that, if they persist over a long period, even small changes in traits like body size and weight - as well as other characteristics such as coat colour, age at reproduction and average life span - can have a profound effect on a species' future population size. But until now, scientists have not had the tools to predict what these effects would be. The authors of this study say that their formulae could be used to give improved predictions for populations of other species for which there exists enough data on the species and the environment in which it lives.

"We know that climate change is having an impact on the lives of animal species around the world. This is clear through the changes we've seen in their population sizes, as well as their body sizes, but what has not been so clear is what underlies these changes. This work provides a relatively easy way for biologists to investigate how, and why, environmental change impacts both the ecology and near term evolutionary future of species," said Professor Tim Coulson from the Department of Life Sciences at Imperial College London, who let the study. 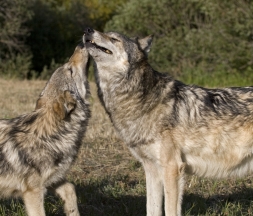 Gray wolves (Canis lupus) were reintroduced to Yellowstone National Park in the 1995, having been driven away by settlers earlier in the century, there are now around 150 individuals in the park. This research was carried out on the wolves because it is possible for scientists to collect the types of data that are essential for studying a population's relationship with its ecosystem.

The scientists examined 15 years of data about Yellowstone gray wolves' biological traits and demographics across a range of 'good' years, when wolves thrived, and 'poorer' years when they did not. They were then able to investigate how the changing frequency of good and bad years influenced population size, genetics, body size and the life history of Yellowstone wolves.

Their results showed that the wolf population was more greatly affected by consistent overall changes in the environment than it was by changes in the magnitude of year-to-year fluctuations. They also foresee that the future consequences of environmental change on wolf characteristics will depend upon which parts of the wolf's life cycle are most strongly impacted.

Professor Coulson continued: "We now have a way to predict with unprecedented detail how populations of many different animals will respond to environmental change, including those animals threatened with extinction. However we simply don't have sufficient information about most of these species and their environments to confidently make such predictions. We urgently need more data if we are to understand how the natural world will be affected by continuing climate change."

The next steps for the research are to apply the methods to species ranging from mosquitos to crocodiles, and to test model predictions in the laboratory and the field. The results of this work will show how such models can be used to set conservation policy.

This research was primarily funded by a European Research Council (ERC) grant to Tim Coulson and grants from the National Science Foundation (NSF) to the United States based researchers. The Natural Environment Research Council (NERC) in the UK has recently provided money to continue the development and application of these models.

For full d etails of the authors please refer to the paper, which can be obtained via the AAAS Office of Public Programs. Kindly refer to +1-202-326-6440 or scipak@aaas.org or http://www.eurekalert.org/jrnls/sci/

Consistently rated amongst the world's best universities, Imperial College London is a science-based institution with a reputation for excellence in teaching and research that attracts 14,000 students and 6,000 staff of the highest international quality. Innovative res earch at the College explores the interface between science, medicine, engineering and business, delivering practical solutions that improve quality of life and the environment - underpinned by a dynamic enterprise culture.