Knighthoods and a CBE for Imperial researchers in 2012 Honours

An obesity researcher and a mathematician from Imperial College London have been awarded knighthoods, and an Imperial chemist has received a CBE, in the 2012 New Year Honours.

Sir Keith O'Nions, Rector of Imperial College London, said: "The honours for Steve, Simon and David mark a great start to 2012 for Imperial and I’m delighted to see their contributions to science and our society recognised in such a prestigious way.

"Steve, as a clinical academic, has pioneered new approaches to tackling obesity and diabetes – one of the major societal challenges of the day; Simon is one of the great mathematicians of our age whose work is extending our understanding of the world around us; and David is a leading figure in chemistry in the UK, who is also dedicated to enabling children and the wider public to share his enthusiasm for science and understand why it is so important. These researchers, along with the Imperial alumni who have been honoured, represent some of the very best that the UK has to give. On behalf of the College, I offer them all my warmest congratulations. "

Professor Bloom is the Head of Division for Diabetes, Endocrinology and Metabolism and Chair of the Section of Investigative Medicine at the College. He is also Lead Clinician for Clinical Chemistry at Imperial College Healthcare NHS Trust. In 1974, he joined the Royal Postgraduate Medical School at Hammersmith Hospital, which became part of the Imperial College School of Medicine in 1997.

Professor Bloom said: "I found out two months ago. My reaction was total astonishment plus disbelief. I was enjoined to total secrecy until the 31st but I told my wife, Margaret, as she got a CBE 3 years ago and knew the ropes. My family were delighted. I've had many messages saying it was well deserved, which it wasn't."

Professor Bloom currently leads a research group investigating how the brain and hormones produced in the gut regulate appetite.

His group's discovery that the hormone oxyntomodulin reduces appetite offers a potential new treatment for obesity and in 2005 Professor Bloom co-founded the spinout company Thiakis Ltd to commercialise these findings.

Professor Bloom added: "The honour is a testament to the efforts of a great many colleagues with whom I have worked over the years. The research team responsible is currently working at full pelt because we think we have an important lead in the treatment of obesity, the world's most dangerous pandemic, and we don't want to lose the opportunity to make a real contribution."

Prof. Sir Simon Donaldson was knighted for services to mathematics.

Professor Donaldson has been Professor of Mathematics at Imperial since 1998 and he works on geometry, topology - the study of shapes, and algebraic geometry.

Speaking about first receiving the news of his honour, he said: "The letter came about the beginning of December and one is supposed to keep it quite secret until the end of the year. Of course I was pleased and excited.

"I have been deeply moved and touched by the messages I have received over the few days from family, friends and colleagues. I think the honour may have some small positive effect in helping to raising the profile of mathematics, and to encourage young people in that direction," he added.

Professor Donaldson's work is theoretical and focuses on understanding the geometry of three dimensional space, and four dimensional space-time. He uses differential equations, which are the basis of all physical science, to look at topology and geometry in new ways.

Together with many other mathematicians around the world, notably Cliff Taubes at Harvard, Professor Donaldson has developed new techniques and ideas in geometry, originating in theoretical physics and quantum theory.

He won the Fields Medal - often referred to as the 'Nobel Prize of mathematics' - in 1986 and in 2009 he received the prestigious Shaw Prize for Mathematics.

Professor Phillips is currently the Senior Science Ambassador for Schools, Professor Emeritus and Senior Research Investigator. He is also the President of the Royal Society of Chemistry. 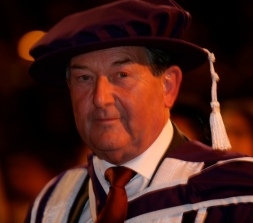 Speaking of when he first learned of his CBE, Professor Phillips said: "I knew from my previous experience with the OBE what might be in the envelope, but of course was delighted to receive it, since such honours are not automatic! I received the letter in mid- November, I think. The Cabinet Office asks you to keep the news strictly confidential, so apart from telling my wife, no-one else knew. You send back a pro-forma saying that should you be recommended for the honour, would you accept or decline. There is always a moment of apprehension that you ticked the right box, because you then hear nothing more until the announcements in the newspapers!"

"As you might imagine, the response from my family and friends has been one of great delight. I am having to reply to dozens of cong ratulatory e-mails to date ! The honour means a great deal. I was awarded the OBE in 1999 for my outreach work in promoting science in general, and chemistry in particular. I have continued with this since that time, but my role in the Royal Society of Chemistry has had a more political flavour, meeting politicians, and with other learned societies trying to secure a good future for science in the UK. The RSC role also has had a considerable international dimension, taking me to the USA, Brazil, China, India and many European countries as ambassador for UK chemistry," he added.

Professor Phillips regularly gives 20-30 popular lectures per annum to schools and lay audiences and e-masterclasses to groups of schools in the UK and abroad. He was exceptionally busy in this regard during 2011, The International Year of Chemistry. He gave the Christmas Lectures (jointly with John Meurig Thomas) on BBC TV in 1986-87 and many series abroad. He has broadcast for TV and radio on his research interests, popular science and the state of British science. Professor Phillips was awarded the RSC Nyholm Lectureship and Medal in 1994-95 for services to Chemical Education, the Michael Faraday Award of the Royal Society, London for public understanding of science.

Professor Phillips is the author of many books and research papers (some 589 in all) in the field of photochemistry and laser research.