Students from across Imperial’s Centres for Doctoral Training, Including the CPE, organised a one-day conference on “The Future of Science,” with high profile speakers, events, competitions and prizes.

Friday 30th March saw the first Centre for Doctoral Training Festival of Science, a day of seminars by external speakers organised by students from across Imperials CDTs. Two of the organisers ­— David James and Sarah-Emily Mutch — were from the CPE. The day was enjoyable and insightful, offering an opportunity for the students to hear about the challenges and opportunities facing the science community as a whole. 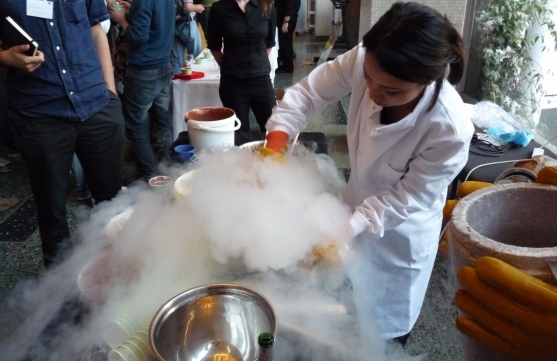 The day was divided into several activities. In the morning, after our welcome talk, we were split up into “Think tank” groups and given a task relevant to the future of science to think over.

Following this we were given a talk by Professor Sir John Beddington, chief science adviser to the prime minister and a former lecturer at Imperial College who gave an amusing, if sometimes slightly pessimistic, talk about the political side of science and how these effect ‘real world’ problems faced by humanity.

After lunch the focus groups presented their opinions on the topics set, after which we were given an excellent talk by Dr Simon Singh on science communication and libel reform. This was followed by Dr Simon Chaplin Head of the Wellcome library, who spoke about the work of the Wellcome Trust and public access to literature. This was complimented by the final talk of the day by Dr Cameron Neylon, who spoke about the future of science collaboration based around web-based networks. 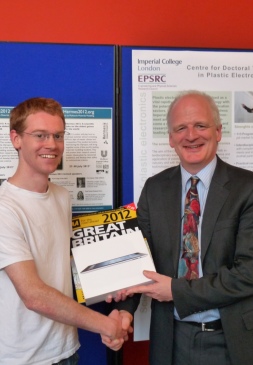 Sebastian Wood and his AA roadmap presented with the prize iPad by Prof. Andrew George

To conclude the day, there was a debate chaired by Prof Richard Templer, founder of the Institute of Chemical Biology, on the motion “This house believes that private funding is detrimental to Scientific Research,” which was successfully overturned by the opposition that consisted of two Plastic Electronics DTC members, Rajeev Dattani and Matt Allinson.

During the event, students were encouraged to give a one minute video explaining their research interests. Congratulations to two Plastic Electronics DTC students for taking two of the three podium places. Sheridan Few got third place, while the competition was won by Seb Wood, seen here modelling his new prize iPad, presented to him by Prof. Andrew George, director of the Graduate School and the School of Professional Development, The video in which he describes Nanoscale Morphology for Organic Solar Cells using an AA road map is available below.