Five members of Imperial staff have been recognised in this year’s Queen’s Birthday Honours List.

Five members of Imperial staff have been recognised in this year’s Queen’s Birthday Honours List. The awards include both academic and support staff, honouring their service to higher education, research and medicine.

Adjunct Professor Tom Hughes-Hallett, the new Executive Chair of the Institute of Global Health Innovation, receives a knighthood for his services to palliative care.

Two members of the National Heart and Lung Institute are also honoured: Professor Margaret Hodson has been made OBE for her services to respiratory medicine, while Professor Duncan Geddes receives a CBE for his services to medical research, charity and education. Professor Geddes said:

“One of the most fortunate parts of an academic medical career is the space to be an all rounder and to combine clinical care with research, teaching and charitable work. I have not excelled in any single one of these but have been ably helped by colleagues in all three. CBE therefore stands for ‘Colleagues at Brompton Earned it’.”

Mr David Nott, an Honorary Clinical Senior Lecturer in the Department of Surgery and Cancer who is also a Wing Commander in the Royal Auxiliary Air Force, receives an OBE in the military honours for his medical work in war regions. Mr Nott said:

“It is such an honour to receive an OBE for something that I am passionate about. Going to Buckingham Palace and being handed the Order is going to be an amazing experience and I am still in a daze. I am especially proud that I have helped teach local surgeons and staff in war regions, so that they can offer an improved standard of care in times of conflict and catastrophe.”

Former College Secretary Dr Rodney Eastwood has been made MBE for his services to education. Dr Eastwood worked at Imperial for 25 years, until his retirement in April this year.  He said: 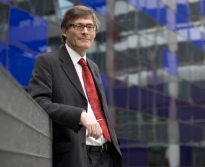 “I found the letter informing me of the award when I returned home after a holiday- it was buried amidst the usual junk mail you return to but was an excellent welcome home present.  The MBE came at a time when my wife Jennifer and I had been celebrating other milestones in our lives and so is a fitting conclusion to these.  I am very grateful to those at the College who put forward a case and look forward to hearing of other administrative, as well as academic, members of staff receiving awards in the future.”