Lord Porter in Beit Quad, where his first Imperial lab was located

A decade after his death, the man who revolutionised the study of chemical kinetics in under 30 minutes has been honoured by the Royal Society of Chemistry with the unveiling of a commemorative plaque.

A well-known figure in 20th Century science, Professor Lord Porter of Luddenham received the 1967 Nobel prize in Chemistry, and went on to direct the UK's most influential scientific bodies*, including the Royal Society, the British Science Association and the Royal Institution. He spent the final twenty years of his career leading the new research field of Photochemistry at Imperial College London, where many of his former students and collaborators continue to work today.

Lady Porter unveiled a National Chemical Landmark blue plaque dedicated to her late husband during a ceremony on 21 November 2012. The plaque will soon be installed at the joint entrance to the Chemistry Building and the Sir Ernst Chain Building - Wolfson Laboratories, at Imperial's South Kensington Campus.

Lord Porter was captivated by chemistry at an early age, being given his first chemistry set and an old bus in which to experiment by his father when he was just 9 years old.

This passion carried him through school and university at Leeds straight into the top secret Hankey Scheme (a project providing the UK war effort with radio physicists), which saw him keeping vital radar equipment on naval destroyers operational during World War II.

By devising in just half an hour a new method for observing short-lived free radicals, George Porter changed the landscape of British chemistry forever.

After visiting a Siemens lamp factory in Preston on an errand for his supervisor, Porter came up with the idea, which would become known as 'flash photolysis' and earn him the Nobel Prize in Chemistry in 1967, of using a flash bulb to initiate a chemical reaction.

South Kensington became the new home for Lord Porter's laboratory in 1985 when he relocated to Imperial College London. He took up the position of Professor of Photochemistry and was the inaugural Chairman of the Centre for Photomolecular Sciences. He remained a Visiting Professor from 1990 until 2002, the year he died.

As well as his contributions to chemistry and his championing of the importance of communicating science to the young and to the public, Porter campaigned tirelessly for improvements in British education and the vital place held by fundamental science in the nation's future prosperity.

He spoke passionately in his 1988 Dimbleby lectures of the dangers of failing to fund ‘curiosity-driven’ research generously and support young scientists in their early careers, an issue that is still under debate today.

Lord Porter's award will join two commemorative plaques presented to Imperial in 2007 to celebrate the College's centenary anniversary. These were awarded to alumni Professor Sir Derek Barton FRS (1918 - 1998) and Professor Sir Geoffrey Wilkinson FRS (1921 - 1996) in recognition of the Nobel Prizes in Chemistry and contribution to their research fields.

James Barber is current director of the Centre for Photomolecular Sciences and Ernst Chain Professor of Biochemistry in the Department of Life Sciences:

"It was I who brought Porter to Imperial. He said to me that it will keep him young, although he was 65 at the time."

David Phillips was head of Imperial's Department of Chemistry during Porter's time, he is also Immediate Past President of the Royal Society of Chemistry: 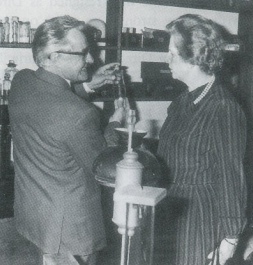 "At the time George was at Imperial he had become avuncular and relaxed, but contributed hugely to research seminars and meetings. I always counted it a great boon to have known him during the latter part of his life - he was very supportive, and a model of culture and style, and a truly great scientist. While we were at the Royal Institution, he was Director, and I his subordinate. Later at Imperial, when he had moved into Chemistry when I was Head of Department, technically, I was his superior. Although it never felt that way!

"I remember one tale about the party the department put on in 1999 when I was awarded the OBE. George was not supposed to attend, since he was on a House of Lords visit to Brussels on the day, travelling for the first time by Eurostar. However, he did not take his passport, either because he forgot, or as we believed, because he thought travelling by train obviated the need for a passport. Needless to say, he did in fact attend my party, and gave a very moving speech. So his loss, my gain on the day."

Maggie Dallman is Principal of the Faculty of Natural Sciences, and attended the unveiling of the National Landmark Award at Imperial: 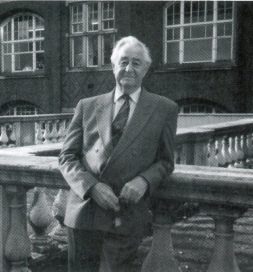 "George was an amazing person and many would do well to aspire to behave like him in their lives and careers. I was lucky enough to know him over many decades, I remember our first interaction was at the Royal Institution where I attended chemistry lectures for A Level students. George was not only a brilliant scientist but he was passionate about the communication of science to the general public.

"I'm absolutely delighted the Royal Society of Chemistry have honoured us in this way by placing the Landmark plaque here. It was also great to have George's wife Stella with us at the event, she's remarkable person who supporting him throughout his life. I know she was thrilled to be here and see how dearly and fondly so many people remember George at the College."

David Klug was a PhD student and post-doctoral researcher with Porter in the 1990s, he is now Chair of the Institute of Chemical Biology in the Department of Chemistry:

"George described his move to Imperial as his 'New Career' and took great delight in the new environment and new lines of research that we engaged in. Something that pleased him further was that the new PhD students and postdocs were very amenable to crewing for him on his sailboat Annobelle (pictured), the name of which was of course a pun. Once we had developed sufficient experience George decided that it was time that we were more ambitious and took a trip to Boulogne where we were to stay overnight before returning the next day. Needless to say I was seasick all the way there and all the way back and was more or less useless as crew for most of the journey. George was sympathetic, but only up to a point, as he told me in the nicest possible way story after story of captains who managed feats of seamanship whilst being themselves continuously seasick.

"George was in many ways the ideal PhD supervisor for me. Always enthusiastic and encouraging and with a huge range of knowledge and experience at his fingertips which he would share at well-timed moments. In fact the closest that George ever came to giving me a direct order was to say 'Well it's not the way that I would do it but if you feel it’s the right thing to do then go ahead'." 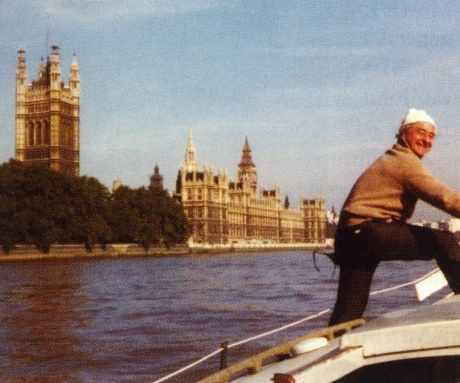 Porter aboard the boat Annobelle, purchased with part of the Nobel Prize money

With thanks to Professor David Phillips for permission to publish photos from his book The Life and Scientific Legacy of George Porter, published by Imperial College Press (2006)