Scientists unveil map of the Universe at 380,000 years old "This is like a baby picture of the Universe" - Andrew Jaffe, Professor of Cosmology and Astrophysics

Pictures taken by Europe's Planck satellite are giving a view of the Universe that's more than 50 million years older than anything previously seen.

These highly detailed images are composed from just over 15 months' worth of data about light left over from the Big Bang.

The new results have allowed scientists to view what the beginning of the Universe looked like 13.82 billion years ago and to estimate what conditions might have been like at that time.

Scientists from Imperial College London and colleagues from across Europe took part in the project to design and operate Planck, which launched from French Guiana in 2009. The satellite measures a form of light called the Cosmic Microwave Background, which was emitted at the Big Bang at the beginning of the Universe. 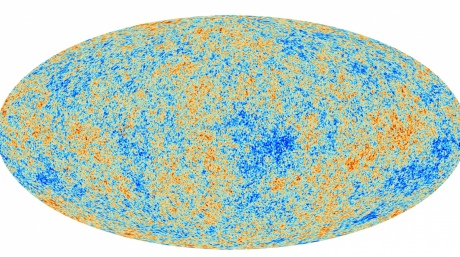 The all-sky picture shows light from the Universe when it was just 380 000 years old.

"We try to learn about that time just by looking at the pattern of the spots. The picture may look like random colours, but they are random colours that have a structure. And in it we see evidence for cosmic inflation, which is what took the Universe from being very small to something much larger over just a tiny amount of time. This tells us how galaxies and other large-scale structures in the Universe came to have the distribution they do."

"There are some new mysteries too. Planck has shown us a very cold spot in the sky, which is bigger and colder than physics theories predict it should be. It's possible it exists thanks to a statistical fluke, or this could be telling us something new about the way inflation happens. Alternatively it could be telling us something about the way the ripples of light came from the Big Bang. One other possibility, and I hate to say this, it might be telling us about something that existed before the Big Bang. If this turned out to be true it would be a very exciting discovery." Planck is a flagship mission of the UK Space Agency, which funds the UK's involvement in both of Planck's scientific instruments, and the European Space Agency. It was launched in May 2009 and sits more than a million kilometres from Earth. Researchers from a number of UK institutions including Imperial were involved in the design and construction of the satellite, and are now working alongside colleagues from around the world to operate the satellite and analyse the data.

Planck unveils wonders of the Universe Men on a mission talk about working with space observatories Looking back in time: New images from Planck mission Blasting off for snapshots of the birth of planets, stars and the Universe