NTU's joint medical school with Imperial is the first in Southeast Asia to have a cutting-edge tool for virtual dissection.

Students at the Lee Kong Chian School of Medicine will be the first in Southeast Asia to do virtual dissection on the latest Anatomage Table, which offers an interactive 3D experience.

Also in use at Imperial College London, the Anatomage Table offers an unprecedented realistic visualisation of full body, life-size anatomy in 3D. Its intuitive touch operation allows students, for example, to use a virtual knife to remove layers of tissue or to view the body’s internal structures and at the same time to fully rotate the body, all with the swipe of a finger. Imported from the United States, it delivers accurate anatomic details and is widely acknowledged as an excellent tool for teaching anatomy.

“LKCMedicine is one of a few medical schools in the world to be using the Anatomage Table, and the only one in Southeast Asia. At Imperial we have been using it to great effect in research and clinical settings, and at LKCMedicine, the Table will be used primarily for anatomy education during the students’ first and second years. Users can also upload their own patient data, for example from MRI or CT scans, to showcase to students real patient anatomy in a life-size scale. The Anatomage Table may also be used for clinical and residency training in the future,” said Dean Professor Dermot Kelleher. 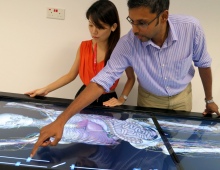 Singapore’s newest medical school, jointly set up by Nanyang Technological University (NTU) and Imperial College London, is ready for its first intake of students in August this year.

The school has a complete first-year curriculum in place for its five-year programme, which places a lot of emphasis on team-based learning, simulation, the scientific basis of medicine and early clinical exposure, all to be enhanced by the use of interactive, multimedia applications.

Teaching materials to be used in the first-year timetable are being finalised and quality assured in London. These include voice-over PowerPoints, interactive eBooks, videos, and assessment materials for team-based learning. All materials can be viewed from iPads issued to each student, allowing them to study as they move between the school’s two campuses, hospitals and polyclinics.

Students will have exposure to patients at Tan Tock Seng Hospital as well as other partner hospitals and polyclinics, while also learning through laboratory practicals at four teaching and research laboratories at NTU’s campus.

Over at Novena, where the second campus is located, new facilities for students include a 180-seat auditorium, a 60-seat seminar room for team-based learning, a student lounge as well as a medical library.

A support system for students has been established, with students assigned to one of five Houses, each with three tutors. The tutors have a professional background as a hospital-based clinician, a family physician, GP, or a scientist. 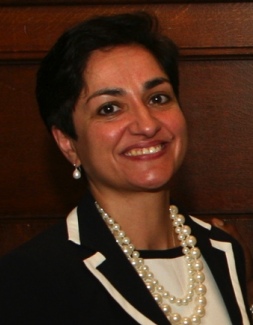 As the school prepares to welcome its first intake of 54 students, Professor Jenny Higham, Vice Dean and Director of Education of Imperial’s Faculty of Medicine, has been appointed Pro Dean of LKCMedicine. She will support the Dean as the school moves into its operational phase, along with the school’s current leadership and Associate Professor Naomi Low-Beer, who has been newly appointed Vice Dean (Academic Affairs).

"The school is well-poised to welcome its pioneer cohort and with the strong foundations in place, we are heading into an exciting future,” said Professor Higham. “I've had the honour of working with a talented and deeply committed team both in London and Singapore these past three years and it gives me great pleasure to continue the work in my new position as Pro Dean. Staff and students have much to look forward to as we firm up what promises to be one of the most innovative medical schools in the world."

As Professor Martyn Partridge will be retiring, he will relinquish his role as Senior Vice Dean in May, after three years in Singapore. NTU President Professor Bertil Andersson and Professor Kelleher thanked Professor Partridge for turning into a reality the shared vision of Imperial and NTU to develop a new medical school for Singapore.

“We appreciate the hard work and speed at which he has worked so that the school is now ready for its first intake, just three years after NTU and Imperial first agreed to set up this joint school. Martyn has blazed the trail and accomplished his mission to lay a solid foundation for the medical school, putting in place an innovative curriculum and cutting-edge teaching facilities,” said Professor Andersson.

“With a superb team recruited locally, with some wonderful, wise and visionary clinical colleagues, and backed by sheer hard work by the curriculum team in London we have produced a first-class and innovative MBBS programme to produce doctors equipped to tackle the health burdens facing us today and tomorrow,” said Professor Partridge. 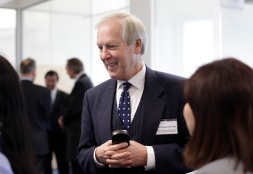 Professor Kelleher said: “Future generations in Singapore will benefit from Martyn’s commitment to excellence in training and professional practice of doctors, and his unwavering focus on putting patients’ needs at the centre of all healthcare.”

Mr Lim Chuan Poh, Chairman of the School’s Governing Board, added, “The Governing Board would like to thank Professor Partridge for working tirelessly to translate the school from concept to the physical reality it is today, ready to receive its first intake of students. At the same time, we would like to welcome Professor Higham as Pro Dean of the school. Jenny has been deeply involved with this project from the initial exploration to her active participation at both the governance and management level. I cannot think of a more qualified person to be part of the leadership team to welcome the first cohort of students to the school.” Professor Higham was at the forefront of discussions for the creation of the LKCMedicine and also chairs the Imperial Project Board responsible for ensuring the medical course is ready for the first student admissions this August. She is also a member of the LKCMedicine Governing Board.

Within Imperial and its clinical partners, she is a leader with extensive senior management experience across both undergraduate and postgraduate education. She additionally holds a number of external board level positions within medicine and higher education and regularly acts as an external expert reviewer.

Her research has focused on reproductive medicine and, more latterly, on education.

Professor Higham’s original work in the UK on abnormal menstrual bleeding developed her reputation as a widely recognised expert, contributing to national guidelines and international definitions. In November 2011, Professor Higham was honoured with the prestigious Mentor of the Year award at the Women of the Future Awards, UK.

Associate Professor Low-Beer is a Consultant Gynaecologist and leading expert on HIV in pregnancy. With an additional academic focus in education research, which saw her appointed the first Walport Clinical Lecturer in Medical Education in the UK in 2008, she has held a pivotal role in the school since January 2011, driving the development of the curriculum.

New Singapore medical school to be created by Imperial and Nanyang Technological University Behind the scenes: Virtual dissections