A new study of sea floor core samples has shed light on how animals and the Antarctic environment evolved in icy conditions.

The emergence of mammals such as whales and penguins and the ecosystem that we are familiar with today in the seas off Antarctica can be traced back to when it was transformed into an icy world approximately 33.5 million years ago, according to research published today in the journal Science.

An international team, led by Utrecht University including researchers from Imperial College London, discovered that the development of these ice sheets and the associated seasonal sea ice cover in ancient Antarctica possibly triggered the evolution of near-modern ecosystems providing favourable conditions for larger organisms such as whales and penguins to evolve and survive. The team say their study highlights the fact that major climate change events are often accompanied by rapid biological evolution. 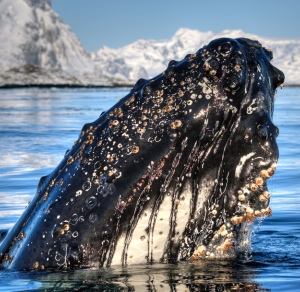 Dr Tina Van De Flierdt, from the Department of Earth Science and Engineering at the College, was part of this study. In 2010 she travelled to Antarctica on a research ship as part of the Integrated Ocean Drilling Programme (IODP) where they drilled deep into the seafloor for sediment cores along the Antarctic margin south of Australia. Previous studies carried out by the team on these cores revealed that sub tropical plants covered Antarctica approximately 53 million years ago.

In this new study, the team focussed on a segment of the core that reveals a time in Antarctica’s history 20 million years later. It showed a time when the climate was gradually cooling until large ice sheets appeared on the continent approximately 33.5 million years ago.

Dr Tina Van De Flierdt, who was an inorganic geochemist on the IODP expedition, carried out the initial chemical analysis on the core samples. She says: “This is a pivotal moment in Antarctica’s history as it moves away from being a warm sub-tropical world to a frigid cold world. The final step of this transition happened quite abruptly and had a major impact on the ecosystem.”

The researchers analysed fossilised microscopic single-celled creatures called dinoflagellates in the sediment cores. Dinoflagellates are an important group of marine plankton and are still in existence today. They found that when Antarctica was sub-tropical and ice-free the seas were inhabited by a diverse array of dinoflagellate species. However, when the ice sheets came into existence the diversity of dinoflagellates species decreased and only species associated with sea-ice environments survived.

Sander Houben, author of the study from of Utrecht University, adds: "Today, the seas around Antarctica play a critical role in the oceanic food web. Strong algal blooms only occur in summer, when the sea-ice melts. These blooms are a key food-source for both small single-cell organisms such as certain species of dinoflagellates and for larger organisms.

"We believe that the sudden change in the ecosystem of the Antarctic waters as indicated by the sudden appearance and dominance of these dinoflagellate species was connected with the development of sea-ice conditions. This was not only critical for climate, but also for biology. Larger sea animals probably adapted their diet because the algal growth season became shorter and more intense. We therefore believe that it is no coincidence that the evolution of modern whales and penguins approximately corresponds with the emergence of the ice sheets."

Journey to “another planet”: students talk about their trip to Antarctica